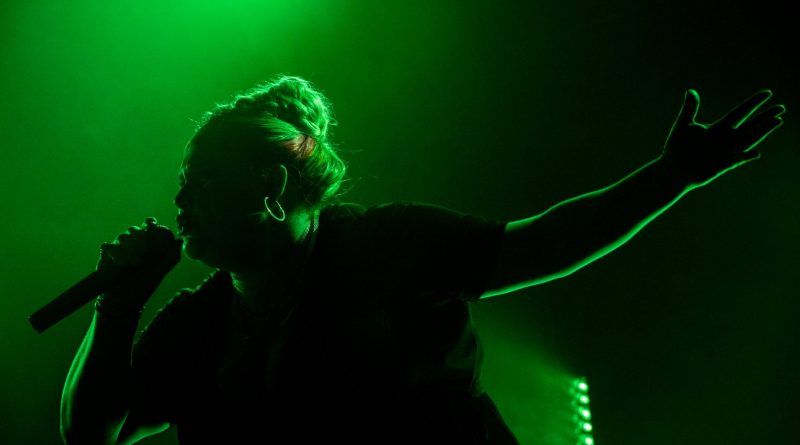 Opening August 18, Patti Cake$ tells the story of aspiring New Jersey rapper Patricia “Killa P” Dombrowski, portrayed by Australian actress Danielle Macdonald in a breakout perfomance. Patti lives with her single mom, Barb (Bridget Everett), and grandmother, Nana (Cathy Moriarty), in near squalor in urban New Jersey. Barb spends her evenings getting drunk and bitterly reveling in memories of her youthful days of near-stardom as a pop singer — a dream that fell by the wayside when she got pregnant with Patti. Patti, without outbursts of rebellion or resentment, sustains the family with menial jobs, while literally dreaming every night of stardom, as over-the-top visions of famous rapper O-Z (Sahr Ngaujah) float through her sleeping mind. Continue reading… Patti and her best friend, Jheri (Siddharth Dhananjay), share a love of rap and mutually hope to make it big, but their performances are mostly limited to local parking lot battles, where their rival, a jerk named Danny (McCaul Lombardi), demeans Patti with cruel references to her weight and appearance during their impromptu rap clashes. Then Patti and Jheri meet the mysterious, reclusive artist dubbed “Basterd” (Mamoudou Athie), who helps them crystalize their sound and transform their style, leading to a major play for success.

While Patti works hard at a catering company to help pay the bills, Barb gets new opportunities to revive her singing career. Both are strong and engaging female characters who are faced with huge challenges involving big risks that could lead to big rewards … or dismal failure.

With echoes of 8 Mile and reminiscent in some ways of Precious — though with more whimsy and humor than either of those films — Patti Cake$ is raw, gritty, and profane. But it’s also a moving story of friendship and hope, with unexpectedly funny moments (Nana’s role in Patti and Jheri’s big single is hilarious).

Patti’s arc may not be the first of its kind to be seen on screen, but Macdonald’s performance is a standout in every way. She’s completely convincing as a “nobody from nowhere” who persists in her dreams no matter what anyone says about her, whether it’s her mom, demeaning Danny, or unappreciative bosses at her day job. And aside from the dream sequences — all of which enhance and are justified by the story — the authenticity, realism, and social relevance established by writer/director Geremy Jasper is such that, at times, you could almost think you were watching a documentary. — Betsy Bozdech

MaryAnn Johanson: Wait: Young women feel stuck in dead-end towns, working dead-end jobs, and dream of something bigger and better? Of course they do… though you’d barely guess it from looking at movies. Patti Cake$ is a nice start toward remedying the lack of disaffected young women onscreen, with Danielle Macdonald’s searing performance as a wannabe rapper mired in rundown New Jersey. Deliciously malcontented and bursting with equal measures of hope and rage, she’s a remarkable character the likes of which is all too rare onscreen.

Jeanne Wolf: Danielle MacDonald delivers the most original female hero of the year in Patti Cake$. Her strong performance as a girl never giving up on her dream of becoming a rapper takes some gritty and unexpected turns in what could have been a very formulaic fairy-tale. Geremy Jasper’s writing and directing debut has some of the flaws you’d expect from a first-timer but his raw talent supported by a fine cast shows a lot of promise. There are some powerful moments and some show-stopping rap sessions. And how about Cathy Moriarty who manages to steal every scene she’s in as the ailing grandma who’s recruited as a back-up rapper?

Sheila Roberts: Patti Cake$ star Danielle Macdonald shines in the role of small town rapper Killa P who aspires to make it big in the New Jersey rap music scene. With the help of friends and despite naysayers, she discovers her true voice in first-time writer/director Geremy Jasper’s vibrant, authentic drama. The film features strong performances by Cathy Moriarty and Bridget Everett and a raw, uncompromising soundtrack.

Nell Minow: Danielle MacDonald gives a lovely performance as rapper Killer P but even moreso as Patti, whether she is sometimes scared, sometimes discouraged, but always vulnerable, yearning, and funny.

Anne Brodie: A fierce ensemble fires Patti Cake$, a dramatic coming of age story enlivened by lots of heart and humour. Relative newcomer Australian dynamo Danielle Macdonald has great ease and charisma in the title role – she’s gifted, determined, smart and admirable as an aspiring rapper looking for meaning in limited circumstances. Cathy Moriarty and Bridget Everett, also forces of nature, support Macdonald in one of the most intimate and touching family stories in a while that challenges our thinking about many social issues. Guaranteed you’ll join the rest of us and enjoy a well-earned cry and swelling of the heart which will last for hours. Strong male characters bring richness but this is female driven dynamite!

Jennifer Merin: This coming of age drama stars Danielle Macdonald in her breakthrough performance as a genuinely gifted teenage girl who is pushed around by her abusive and abused alcoholic mom and bullied by her less-than-inspired peers — all of whom are unaware of her huge and unexpected talent for rapping. The finely developed story about a young woman’s personal aspirations and challenging circumstances is certainly relevant for today.

Pam Grady: Rap may be the musical medium in which Patricia Dombrowski aka Killa P aka Patti Cakes expects to make her mark in the world, but her story is more rock ‘n’ roll, unfolding like one of Bruce Springsteen’s working-class anthems in writer/director Geremy Jasper’s feature debut. Australian Danielle Macdonald burrows deep into this skin of Jersey girl Patti, who is desperate for a way out of a dead-end life of low-paying jobs, never-ending bills, and life with her alcoholic single mom. For someone who rhymes as automatically as she breathes, rap stardom shimmers in her dreams as salvation. And when she and her co-conspirator Hareesh (Siddharth Dhananjay) meet enigmatic punk musician Basterd (Mamoudou Athie), Patti sees a chance to turn fantasy into reality. The story line is classic—it’s easy to imagine Judy Garland and Mickey Rooney 75 years ago in a swing version of the tale—and as powerful as is it poignant.