Raw, emotional, and creative, Valerie Muller and Angelin Preljocaj’s Polina is an engaging story about a young Russian dancer who needs to find her inner self before she can truly lose herself in her art. With strong and compelling performances both on and off the dance stage, the film is a powerful look at managing others’ expectations, having the courage to take chances, and believing in yourself. Continue reading… 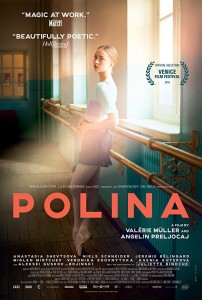 Polina (played as a girl by Veronika Zhovnytska and as a young woman by Anastasia Shevtsova) dedicates herself to dance from her earliest years, learning classical ballet from a demanding instructor named Professor Bojinski (Alexsey Guskov). Ballet isn’t an effortless art for Polina; she must always work extremely hard to shine. But it pays off when she passes her audition for the Bolshoi Ballet, to the delight of her parents, who’ve supported her dance studies through business means that are less than aboveboard.

Then Polina sees a contemporary dance piece choreographed by Liria Elsaj (Juliette Binoche), and something inside her clicks: This is what she’s meant to do, not the Bolshoi. So she changes her trajectory in an instant, heading off to France with her boyfriend/fellow dancer Adrien (Niels Schneider) so they can both study with Liria. But something is still holding Polina back; she isn’t able to give herself over fully to the power, vulnerability, and emotion of Liria’s piece.

That inability — combined with pride and an unfortunate injury — lead Polina to look for work (and answers) elsewhere. Her search ultimately leads to a seedy bar in Anvers, a community dance class, and Karl (Jeremie Belingard), a talented dancer who needs a roommate … and, it turns out, a new source of inspiration. The path that Polina’s story takes from there isn’t what you’d call surprising, but it’s very satisfying to watch her finally, finally fully invest herself in her art. Muller and Preljocaj film the dance sequences beautifully, especially the climactic one, which harkens back to an early scene of a young Polina dancing through a stark Russian winter landscape. It’s that spark of childhood joy — to dance for the sake of dancing alone — that Polina needs to rediscover to become the dancer and woman she was destined to be. — Betsy Bozdech

MaryAnn Johanson: Polina dreams of being a ballet dancer as a little girl in Moscow, but she can never seem to satisfy her teacher… an obstacle that troubles her even as she hones her technique and gains admission to the prestigious Bolshoi and later a school of modern dance in France. Is she too cold and unemotional a dancer, as she keeps hearing? Or does she have to find her own path to expression? Maybe she just needs to grow up and experience life outside of school and studio in order to understand herself? It’s all of the above in this marvelous paean to everything that goes into making greart art: hard work, complicated humanity, taking risks, and trusting one’s own instincts. Russian dancer Anastasia Shevtsova is tremendous as Polina, a young woman with an indominable — and hard-nosed — spirit in the face of enormous obstacles… many of them within herself. Women onscreen don’t often get to be stubborn and difficult in the pursuit of their passions, and it’s often hard to like Polina, though she earns our respect beautifully.

Susan Wloszczyna: In the film Flashdance, when Jennifer Beals is about to toss away her ambitions to be a ballerina, her boyfriend tells her, “When you give up your dream, you die.” But what if you are fulfilling someone else’s dream? Apparently, you never really live. That is what happens to the title character in Polina. Read full review.

Sheila Roberts: Co-directors Valerie Muller and Angelin Preljocaj take dance to new heights in their beautifully lensed, gorgeously choreographed drama, Polina, about a talented young Russian ballerina’s struggle to find her most authentic, artistic self. Classically trained at an early age, then invited to join the prestigious Bolshoi Ballet, Polina rebels against the structured steps of classical ballet after years of rigorous training. She’s drawn to the liberating, edgier moves and free style of modern dance that allow her to focus on her own interpretations and tap into her innermost feelings. Polina embarks on a challenging journey of exploration, soul-searching, and self-discovery that takes her in unexpected, sometimes painful directions. As she travels from Russia to France and then Belgium, the film’s circuitous narrative structure mirrors her inner turmoil until she finds a way to break free from all the conventions she’s been taught and arrive at her true calling. Adapted by Muller from the graphic novel by Bastien Vives and filled with many magical moments, Polina marks the film debut of professional dancer Anastasia Shevtsova and features Oscar-winner Juliette Binoche and former Opera National de Paris dancer Jeremie Belingard in influential supporting roles. DP Georges Lechaptois captures the choreography in unique and expressive ways, such as tightly focusing on Polina’s ballet shoes as she dances solo on the conservatory’s well-worn wooden floor or shooting a dance sequence on stage from overhead through the theater’s rafters.

Anne Brodie: Anastasia Shevtsova is the grown up Polina a ballet dancer living in Moscow whose parents have struggled to provide her with ballet classes in the hope that she will become a star. Her father involved himself with gangs to bring the money home when Polina quits dance to work in a bar in Provence. Polina’s certain she’ll never live up to her parents’ dreams and finds that life is good in France where she is accepted as who she is. Her father comes to get her but she refuses to return to Moscow. A modern dancer takes her under his wing and together they realize a new dance dream. Filmmakers and co-directors Valérie Müller, Angelin Preljocaj make great use of the human form, using it as narrative, emotional centre and as a source of beauty. The cinematography is stellar, bringing meaning to the worlds Polina inhabits and capturing artistic striving.

Liz Whittemore: Polina is an incredibly accurate portrayal of what a young dancer endures in the pursuit of becoming one of the elite few in a professional company. As a dancer myself since the age of three, I can attest to the physical and emotional strain ballet can cause. The exhausting hours of rehearsals, being constantly pushed to the limits to be perfect. This film is gives us the full gamut of one young dancer’s career, from childhood dreams to adult discovery. The film does not rest on pretty. We see a young woman’s whose personal life wreaks havoc on her ability to connect to her work. Once out of her own way, Polina provides us with release in the form of one the most breathtaking choreographed pieces I’ve ever witnessed. It’s a beautiful coming of age piece that happens to be experienced through the world of dance.

Jennifer Merin: Polina is an affecting coming of age story set within the world of dance. The narrative follows a young Russian ballerina who gradually breaks the stylistic bonds of her classical Bolshoi training and discovers her own artistry in the fluidity of expression of modern dance. At the same time, Polina treads lightly in her relationship with parents who have high expectations for her, and experiences the wonder and anxiety of first love. Beautifully shot and choreographed, the film communicates much of its meaning through stunning dance sequences that express Polina’s stresses and desires, and engage you in her complex emotional changes.

Cate Marquis: Fans of both classical ballet and modern dance will fine much to enjoy in this film, in part because the dance sequences are not little snippets used to season the story, but a major (and delightful) part of the film’s running time. Preljocaj’s often electrifying choreography is reason enough to see this film but the film also features Juliette Binoche and handsome French-Canadian actor Niels Schneider. Read full review.

Pam Grady: Gorgeously shot drama about a Russian ballerina who abandons the Bolshoi and eventually reinvents herself as a modern dancer and choreographer in Antwerp soars so long as directors Valérie Müller and Angelin Preljocaj concentrate on the dance. Unfortunately, this adaptation of a graphic novel, has a plot comprised of hoary cliches and too many characters that are tired stereotypes. If only the filmmaking had half as much ambition as Polina‘s central character.