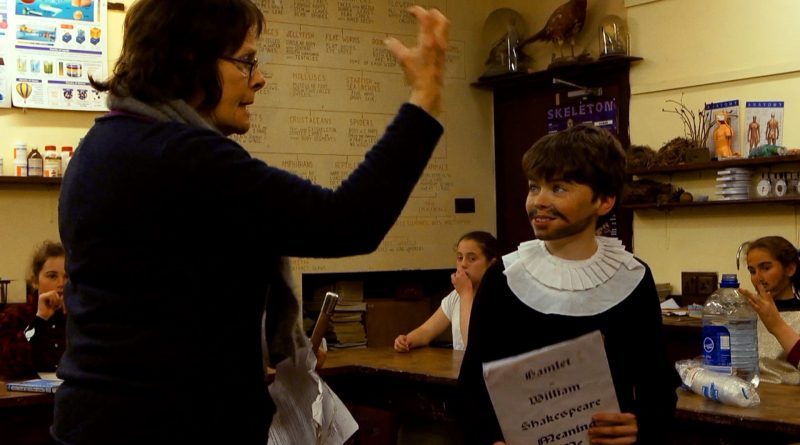 School Life, director Neasa Ní Chianáin’s sweetly pellucid portrait of Headfort School in County Kells, Ireland feels like a sojourn in another simpler age. Inside the school’s rambling hallways and comfortably shambolic classrooms, a proper education, in all senses of the term, is unfolding. Continue reading… 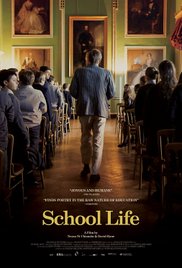 Founded in 1949, Headfort has been home to generations of children and teachers, including John and Amanda Leyden. He teaches Latin and oversees the school rock band. She teaches English and shepherds her charges through a production of Hamlet. The couple met and married in 1972, when they were both teaching at Headfort, and have carried on ever since. The film captures the daily rhythms of life at Headfort, settling gently beside the Leydens as they discuss the upcoming year, and then banging about with the new crop of students, as they deal variously with homesickness and social pressures.

The kids (ranging in ages from 7 to 13) are a motley bunch, frizzy-headed, large-toothed, and knock-kneed, but gradually, personalities begin to emerge — from the brilliant, and incredibly sombre Eliza, to young Ted, dealing with dyslexia and given to messing about in the woods.

The Leydens are nearing the end of their tenure, and conversations about the possibility of retirement come and go, although the couple is obviously, quite deeply in love with their jobs. Whether it is coaching a would-be drummer in the school band or reading Enid Blyton’s Famous Five to a classroom of enraptured children, their dedication is a gentle reminder of the critical role that teachers have historically played in the lives of children. (The film’s original title was In Loco Parentis – meaning in “place of parents.”)

Chianáin has an easy way with her subjects, so much so that both kids and adults seem barely aware of the camera. This degree of intimacy allows for complete immersion in the atmosphere of the place. From scenes inside the classroom debating the finer points of gay marriage, to kid battles in the verdant woods, the film’s ramshackle charm is so gentle and persuasive that it is easy to give yourself over to the narrative, meandering and bucolic as it is, with nary of squeak of criticism.

In the film’s final coda, as the graduating class prepares to say goodbye, the tears are copious and tragic. Only the hardest of hearts wouldn’t feel a twinge at such a display of raw emotion. Time moves on, kids grow up, and the Leydens return home to their smallish house, another school year over. — Dorothy Woodend

Betsy Bozdech School Life is a charming, appealingly slow-paced documentary about a year in the life of two about-to-retire teachers at Ireland’s Headfort boarding school. Tradition co-exists with innovation as the couple’s young students study both traditional subjects and learn what it’s like to be in a rock band. While there’s no denying that Headfort exists inside a comfortable, privileged bubble, the people who populate the school — and the film — are disarming, relatable, and delightful, and their story is a welcome respite from the whirlwind that daily life is for many of us.

MaryAnn Johanson: Documentarian Neasa Ní Chianáin (with David Rane) follows, verité style, John and Amanda Leyden through a year at the boarding school in the Irish countryside where they’ve been teaching youngsters for decades… and from which they must now consider retirement. This is a beautiful contemplation of what it means to guide and inspire children and, more broadly, the purpose a dedication to service brings to our lives, and how the loss of that purpose can be unnerving. The film’s sensitive eye feels like that of, perhaps, a shy student observing her elders, absorbing lessons that she may not yet appreciate but which will resonate until she does.

Nell Minow: Like a real-life Mr. and Mrs. Chips, John and Amanda are the teachers we all wish we could have had, endlessly kind and dedicated. It is a joy to watch the children bloom under their benevolent encouragement.

Liz Whittemore: With its effortless charm School Life pulls at the heartstrings of this former substitute teacher and children’s theatre director. Following a married couple who teach at an Irish boarding school, this doc will bring you back to the days where being away from home can be both all-consuming and exciting. Read full review.

Jennifer Merin: School Life is Neasa Ní Chianáin and David Rane’s delightful documentary about a very special Irish boarding school where primary grade students’ intellects, wisdom and self-esteem are elevated through music studies and school theatricals. In their decades-long careers, teachers John and Amanda Leyden have encouraged their students to strive for and achieve excellence at Headfort School, housed in an elegant 18th Century stately home. The Laydens and their Headfort cronies are endearingly crusty and unfailingly supportive of their flock of charming young charges. Just think Hogwarts meets School of Rock, and enjoy this film with all of its magical moments.

Cate Marquis: School Life is an enjoyable, charming documentary about a delightfully unique Irish school, and adds a wonderful couple, the Leydens, to the pantheon of memorable teachers on film. Read full review.