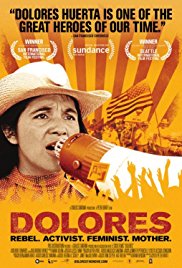 Peter Bratt’s tightly paced, vibrant documentary profiles tireless labor activist Dolores Huerta who never doubted her calling and how it gave meaning to her life. Huerta played a pivotal role in the founding of the United Farm Workers Union alongside Cesar Chavez. As a key grassroots organizer and union strategist with serious lobbying and negotiating skills, she found herself at the intersection of a social revolution in the ‘60s and ‘70s that encompassed racial and labor justice, the environment, feminism and gender equality. Continue reading…

A mother of 11 children, she dedicated her life to fighting for social justice at tremendous personal sacrifice. Bratt tells Huerta’s story with heart, humanity and economy through moving archival footage of significant historical events and intimate, insightful interviews with her, her family, and highly regarded colleagues and supporters such as Hillary Clinton, Angela Davis, and Gloria Steinem. Huerta was an architect of her own destiny at an early age and always believed women cannot be cut out of history and must express their ideas and take credit for their work and contributions.

She has exemplified that philosophy throughout her life, and today, at 87, remains active working for her foundation and inspiring a new generation. At 95 minutes, “Dolores” cannot begin to cover every detail of this pioneering woman’s long and eventful life, but it is an excellent introduction and an obvious labor of love. Overshadowed by the iconic Cesar Chavez, Huerta’s powerful and inspiring story is long overdue.

It’s great to see this unsung heroine finally receive the recognition she deserves. The film is executive produced by Carlos Santana based on a screenplay co-written by Bratt and Jessica Congdon who also served as editor. Noteworthy among the film’s high production values are DP Jesse Dana’s transformative imagery, Congdon’s artful editing, Mark Kilian’s original music, and Bob Edwards’ crisp sound design, all of which contribute to the documentary’s high quality.