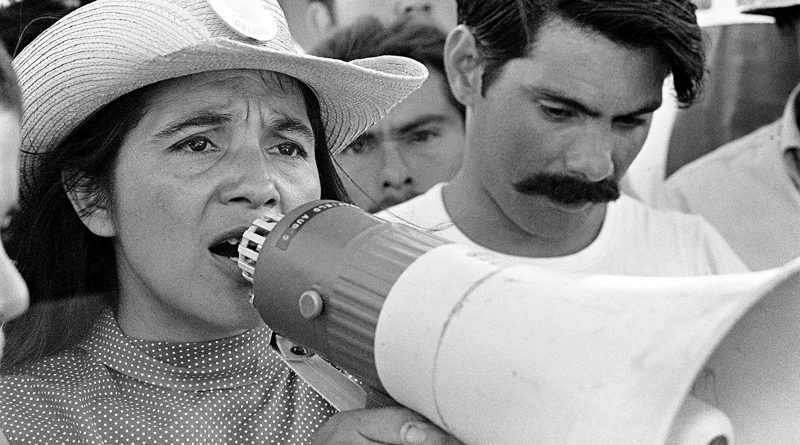 It’s a safe bet that many folks, if asked to name someone associated with the United Farm Workers of America union (originally the National Farm Workers Association), would draw a total blank. Some might come up with Cesar Chavez. But very few are likely to mention Dolores Huerta, despite her countless contributions to the UFW beginning in the 1960s and her continuing role as an outspoken intersectional activist who fights for feminism, civil rights, environmentalism, and more. Continue reading… Peter Bratt’s documentary Dolores aims to change that, offering an informative, emotional portrait of a woman who made many sacrifices to fight for causes bigger than herself. The film traces Huerta’s life from her early days fighting for Latino economic rights and working to register voters; through the tumultuous ’60s, when she and Chavez worked side by side to organize agricultural workers; to her more recent campaigns and honors (including the Presidential Medal of Freedom). While focusing on Huerta’s work — and complicated personal life (11 children, two divorces, one long-term relationship) — Dolores also serves as a timeline and chronicle of the wide-ranging activism of the mid/late 20th century.

Featuring interviews with/appearances by Gloria Steinem, Luis Valdez, Hillary Clinton, Nancy Pelosi, Angela Davis, and more, the film shows how the many causes that Huerta has long been passionate about intersect. And it’s that very intersectionality that makes her such an important figure in modern history. Her children, now grown and successful professionals/activists in their own right, speak candidly about how hard it was to share their mother with the world — but they also see, at least in retrospect, how very much the world needed her.

Near the end of the movie, Huerta is described as “a dancer on the stage of justice.” And both she and Bratt deserve credit for making Dolores as engaging and heartfelt as any foot-stomping, hip-swaying dance performance. By the time the credits roll, you’ll want to join Huerta on her stage, fighting the good fight. —
Betsy Bozdech

Sheila Roberts: Peter Bratt’s tightly paced, vibrant documentary profiles tireless labor activist Dolores Huerta who never doubted her calling and how it gave meaning to her life. Huerta played a pivotal role in the founding of the United Farm Workers Union alongside Cesar Chavez. As a key grassroots organizer and union strategist with serious lobbying and negotiating skills, she found herself at the intersection of a social revolution in the ‘60s and ‘70s that encompassed racial and labor justice, the environment, feminism and gender equality. Read full review.

Esther Iverem: A new documentary about the labor leader and community organizer Delores Huerta also tells the story of the Chicano Movement for human rights in California beginning in the 1960s. Directed by Peter Bratt and produced in association with the Huerta’s foundation, “Dolores” is a largely sympathetic but honest biography of Huerta as a Mexican American woman who turned her back on a comfortable life as a married mother to eventually become a national force—alongside Cesar Chavez—organizing exploited farmworkers. Huerta’s work, which included launching the successful boycott of grape growers, catapulted her to a national prominence and spotlight, where she has remained both beloved and scrutinized. In a somewhat glaring omission, “Dolores” does not mention the criticisms surrounding Huerta’s work for Hillary Clinton’s presidential campaign in 2016 but it does tell enough of her backstory to pay tribute to her vast contribution to social justice.

MaryAnn Johanson: You’ve probably heard of Cesar Chavez even if you don’t know anything about migrant farm workers and civil rights activism, but you’ve likely never heard the name Dolores Huerta, who was at least as important in organizing and unionizing farmer workers in California (for starters), and arguable even more so. This striking documentary about the now-87-year-old social justice warrior means to correct that. A powerful portrait of an extraordinary woman, this is a clear-eyed look at not only Huerta’s vital work but also at the extra battle she — and all women — face even in their own movements: sexism and racism from the monied and powerful is one thing, but sexism from her fellow activists? Huerta’s uphill battle was even steeper than that of her male compatriots, and she’s all the more legendary for overcoming it as much as she did.

Nell Minow: Dolores Huerta is as inspiring on the screen as she has been in decades of living rooms, fields, and rallies. Viewers should take away some of her spirit to continue her fight for justice.

Jeanne Wolf: Dolores Huerta insists “You can’t write women out of history.” The film that Carlos Santana produced about her,”Dolores”, reminds us that Cesar Chavez had a strong partner in his fight for the United Farm Workers. The activist/mother was at the forefront of the battle for human rights and dignity for those workers and all people of color. Often the lone female
at the head of the crusade was Dolores who fought fiercely for wages, living conditions and even drinking water for the men, women, and children who toiled in our country’s fields. “Si, se puede” – ” Yes we can !” was her motto, and Barack Obama confessed that he “stole” that slogan from Dolores when he awarded her the Presidential Medal of Freedom. She proved that she could at a time when no one thought she had a prayer of making an impact. “All a person has is their own story” was her strong belief. “You can’t cause change if you are not willing to give something up.”, she would declare. Her story and what she sacrificed will make you proud and is told well on the screen.

Liz Whittemore: Fighting for farm labor rights alongside Cesar Chavez, Dolores Huerta’s story is one that should be spread far and wide. Exposing the economics of racism, becoming an advocate for environmental justice, and a leader for women during times in history when the female voice was being ignored by the patriarchal government, Dolores deserves to be properly represented in our schools’ history books. This documentary is far too relevant in our current political climate and that is precisely why it is so important. “Well-behaved women seldom make history.” Dolores Huerta was anything but “well-behaved” and that’s when things began to change.

Jennifer Merin: Peter Bratt’s compelling and comprehensive profile of Dolores Huerta is a long overdue tribute to the feminist activist who has dedicated her life to championing human rights — often at the expense of her own personal safety. Huerta, now 87, and the film are inspiring guides that remind us that change for better happens because we make it happen.

Cate Marquis: Dolores Huerta, co-founder of the National Farm Workers Union, the person who coined the phrase “Yes, We Can” (“Si Se Puede”), a labor organizer instrumental in leading the 1960s grape boycott, and a social activist for Chicano, Native American and Latinos rights, should be a name everyone knows, as familiar as that of Caesar Chavez, the other co-founder of the National Farm Workers Union. Never heard of Dolores Huerta? Many people haven’t, and that’s the problem the new documentary DOLORES sets out to remedy. Read full review.

Pam Grady: The world knows the name of Cesar Chavez. Few know Dolores Huerta, despite the fact that she founded the United Farm Workers union with Chavez and was the heart and brains behind many of their boycotts, strikes, and organizing actions. Peter Bratt’s insightful documentary–the brainchild of legendary guitarist Carlos Santana, who executive produces–aims to restore Huerta to her rightful place in history. Archival footage and interviews with her associates and family tell part of the story. The rest is told by Huerta herself, still vibrant, still engaged, and still organizing at 87. “Si, se pueda!,” “Yes, we can!” is the slogan that Huerta coined for the UFW–borrowed by Barack Obama for his presidential campaign–and that message resonates throughout the film. Dolores is not just a portrait of a woman from humble beginnings who rose to become a key figure in the modern labor movement, it is also an impassioned call to action. Read Pam Grady’s interviews with Dolores Huerta and Carlos Santana, Dolores producer.