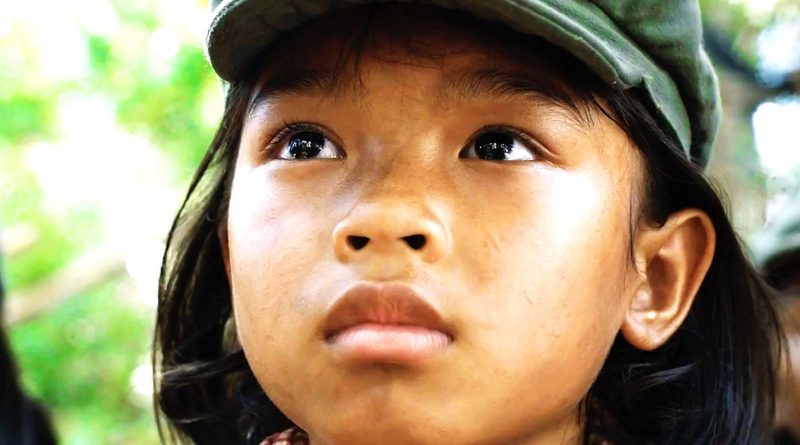 Heartbreaking and powerful, First They Killed My Father is Angelina Jolie’s adaptation of activist Loung Ung’s memoir about her childhood in Cambodia under the Khmer Rouge’s murderous regime. In the film, young Loung (Sareum Srey Moch) and her family — mother, father, several siblings — are enjoying a comfortable, happy life in Phnom Penh in 1975; then Pol Pot’s army marches into the city, abruptly orders everyone else out, and rounds them up into work camps, where they’re expected to obey orders instantly and give up any pretense of individuality or agency. It’s all for the greater good of their new-and-improved nation, they’re told. Continue reading… Because Loung’s father worked for the overthrown government, their whole family is in even graver danger than the average Cambodian citizen, so they hide, split up, and lie about their identities. But even that’s not enough to shield the family from loss; eventually, Loung ends up on her own, in a special camp for children who’ve been identified as having the potential to become soldiers. She witnesses — and experiences — unfathomable pain and suffering as she works hard to stay alive, a persistence that eventually pays off when she’s reunited with part of her family.

The fact that the film is based on a true story is horrifying; the fact that that story took place only about 40 years ago is, frankly, sickening. And everything writer/director Jolie shows us packs even more of a punch because it’s happening to/around a child (Moch’s performance is astounding). The film has an immersive, documentary-like feel in many places; in others — for instance, Loung’s dreams/moments of unreality — it has an otherworldliness that suggests how strong Loung’s desire was to escape her circumstances. Jolie balances all of this artfully, using the film both to remind viewers how cruel humans can be to each other and to prove how resilient the human spirit can be in even the darkest of circumstances. — Betsy Bozdech

Nikki Baughan: In dramatising the childhood experiences of Cambodian author Loung Ung who, along with her family, was removed from her home and endured life under vicious Khmer Rouge rule in the mid-1970s, First They Killed My Father is not just Angelina Jolie’s best work as a director, but one of the most effective war films of recent years. By keeping the focus on Loung (played by the mesmerising Sareum Srey Moch), the film avoids making any over-arching retrospective political statement – save from an opening sequence of contextual archive footage – instead presenting this unfathomable genocide through the day-to-day experiences of those who lived it. Here, Jolie is aided by Anthony Dod Mantle’s masterful, immersive cinematography, which combines intense low angles, conveying the horrific immediacy of Loung’s experience, and well-used aerial shots, in which the displacement and suffering of an entire country becomes desperately clear. Colourful flashbacks, in which Loung recalls happier times, contrast with the washed out tones of the family’s work camp; joy and hope literally bleeding from the frame. And individual moments, such as the family giving up all of their personal possessions to a grinning soldier, are equally as powerful in their restraint. A sensitive yet utterly damning exploration of the impact of war and subsequent innocence lost, First They Killed My Father is a devastating, essential film.

MaryAnn Johanson: Angelina Jolie’s labor-of-love First They Killed My Father is an astonishing view on social upheaval, political repression, cultural re-education, and outright warfare, all seen through the eyes of a little girl. Five-year-old Loung has no larger perspective on her family’s uprooting from their comfortable life in Phnom Penh when the Khmer Rouge take over Cambodia in 1975, giving her story a terrible intimacy and a dreadful suspense as our grownup awareness and historical knowledge fill in the blanks and anticipate the horrors to come. This is a unique film that does not diminish or minimize a child’s experience, nor does it sentimentalize it in any way.

Jeanne Wolf: Angelina Jolie delivers a unique and unsettling perspective on war in “First They Killed My Father.” The terrible destruction of Cambodia by the savage Khmer Rouge is extremely disturbing seen through the eyes of a child. Based on the book by Loung Ung, it’s an unforgettable journey of a five-year-old struggling to survive when she and her loving family are forced to flee their warm and comfortable home to live day by day as their world collapses around them. Jolie has written and directed her most finely crafted film yet. She conveys the terror but doesn’t overwhelm you with graphic bloodshed. Young actress Sareum Srey Moch who portrays Ung, has wide eyes and an expressive face that speaks volumes about the horrors that surround her. This movie will haunt you. It reminds us of the loss of innocence left in the wake of unfathomable inhumanity.

Sheila Roberts: Angelina Jolie’s uncompromising new film, “First They Killed My Father,” based on human rights activist Loung Ung’s bestselling memoir, is Cambodia’s official Oscar entry and her best work to date as a director. It’s a must-see that deserves all the buzz it’s getting. Jolie takes an unflinching look at the Cambodian genocide through the eyes of a child and her harrowing experience. The film features riveting performances by first-time actor Sareum Srey Moch, Phoeung Kompheak, Sveng Socheata, and an all-Cambodian cast of non-professionals who do a phenomenal job capturing their characters’ heartache, raw emotions, and personal trauma. Jolie’s passionate directorial effort is supported by high production values and uniformly excellent work by DP Anthony Dod Mantle, production designer Tom Brown, costume designer Ellen Mirojnick, editors Xavier Box and Patricia Rommel, and composer Marco Beltrami. Acclaimed Cambodian director and documentary filmmaker Rithy Panh, whose family died under the Khmer Rouge government, serves as one of the film’s producers. Jolie’s adopted son, Maddox Jolie-Pitt, who was a Cambodian refugee, is also a producer. Jolie has dual U.S.-Cambodian citizenship.

Anne Brodie: Angelina Jolie and her adopted son Maddox Jolie-Pitt have clearly put their hearts on the line in making First They Killed My Father: A Daughter of Cambodia Remembers, the devastating, fact-based dramatization of the life of Loung Ung, a Cambodian child who was captured and brainwashed by the communist Khmer Rouge regime under Pol Pot in 1975. Ung, now an activist and author, was evacuated from Phnom Pen along with most of the city, to be “reprogrammed” though torture, fear, threat of execution and starvation. She survived an ultimately escaped but her father was murdered as an example in front of the family and other captives. Jolie reveals the heart wrenching facts, balancing sensitivity with power, and political upheaval and Ung’s inner life. The cinematography is stunning and young Sareum Srey Moch is unforgettable as Ung. Maddox, who was born in Cambodia, is listed as Executive Producer and Jolie is co-writer, producer and director. The film is Cambodia’s Oscar entry.

Liz Whittemore: Based on the autobiographical novel by Loung Ung, First They Killed My Father is a stunning film about the Ung’s personal upheaval​ during the Khmer Rouge years. Director Angelina Jolie’s sole use of Cambodian actors adds to the realism as some are actual survivors of Pol Pot’s regime. Experienced from the perspective of a child, we are treated to gorgeously detailed shots from the literal ground up, letting the audience share in the visceral feelings of despair, confusion, and bravery of her family. First They Killed My Father is an epic cinematic journey through a dark period in Cambodian history.

Jennifer Merin: Using her celebrity clout and extraordinary creativity to bet possible use, Angelina Jolie has written, produced and directed a film that has the capability to change hearts and minds. First They Killed My Father, adapted from author/activist Loung Ung’s memoir about her childhood in Cambodia under the rigorously repressive rule of the Khmer Rouge, lays bare the horrors of war in a most affecting way — through the eyes of a child whose humanity and hope survive in her, although she witnesses her father slain by her captors, is torn from her mother and siblings and thrust into training as a child soldier who is forced to kill or be killed. In her brilliantly authentic performance, young Cambodian actress Sareum Sray Moch’s soulful eyes let us feel the horrors she is experiencing, and DP Anthony Dod Mantle’s camera finds angles that effectively alternate between the child’s eye-level view of what’s around her and overall perspectives from tree tops that show just how small the child is in the midst of the vast devastation brought by war and the punishing policies of the Khmer Rouge. Brava to Jolie and crew for delivering this powerfully artful and beautifully realized cinematic statement against war.

Title: First They Killed My Father