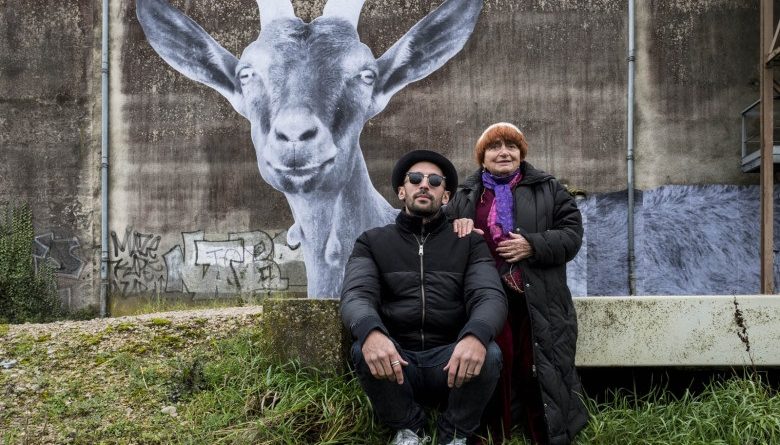 Celebrated filmmaker Agnes Varda is no stranger to making films about everyday, relatable people — including herself. FACES PLACES, her collaboration with photographer/artist J.R. (he’s known only by his initials), chronicles the pair’s friendship and partnership while introducing audiences to a wide range of French people, who share their communities and fascinating stories with Varda and J.R. in exchange for powerful, personalized public art installations. Continue reading… 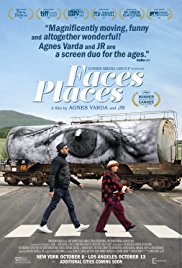 This charming documentary kicks off with Varda and J.R. re-enacting all the ways they didn’t meet, then tells how they did, a coming together of like-minded artists who both recognize the value of the lives and histories of “regular people.” J.R. gained fame for his large-scale photography exhibits/installations featuring people he happened to meet; Varda has earned acclaim for making movies about characters who are humanly flawed and realistic. Together, they travel around France, talking to locals in each village and town they visit, finding out what makes the community tick, planning photo installations, and putting them up, typically with the locals’ help.

The result is the best kind of public art — immediate, integrated into the community, and extremely personal. Seeing huge images of themselves and their ancestors towering over their community makes the people Varda and J.R. work with feel seen and heard. Being part of the installations inspires pride, belonging, and involvement in people who are rarely asked to share what makes them special or interesting, even though their stories are all fascinating.

Underlying it all is the dynamic between Varda and J.R., which isn’t always easy — but their respect and affection for each other are clear. Also extremely compelling are Varda’s stories about her decades as a filmmaker/artist — including her memories of Jean-Luc Godard (and her present-day frustration with him). It’s just more proof that we all have hidden depths and personal histories full of unique experiences. If FACES PLACES can inspire audiences to listen to each other’s stories more often, it will have accomplished something powerful. — Betsy Bozdech

Nikki Baughan: Iconic film director Agnes Varga and photographer/artist JR take a hugely entertaining road trip through rural France, visiting villages off the beaten track and meeting their inhabitants. These myriad individual stories are celebrated in the huge photographic murals that JR creates: a farmer stands proud on the side of his barn; a row of miners line up silently on a row of abandoned houses. As the pair travel, they converse joyfully on subjects ranging from art and creativity to friendship, joy and the inevitability of death; given an extra poignancy thanks to Varga’s pragmatic approach to her own advancing years. A celebration of individual spirit, a treatise on the changing nature of human connection and a lament for traditions in danger of being forever lost, Faces Places is funny, insightful and deeply moving.

MaryAnn Johanson: At almost 90, French film legend Agnes Varda remains an artistic inspiration, nay, a force of nature, as she travels around rural France with photographer and muralist JR, creating art as social commentary and community project engaging everyone they encounter. Varda’s generosity seems to get enlarged just as JR’s giant photos do by their encounters with farmers, factory workers, and goats, and her gregarious spirit is an infectious joy. Oh, to be so happily engaged by one’s art!

Esther Iverem: If you enjoy movies as means to see the world in new ways, “Faces, Places” will be a treat, a note a reality and sanity in today’s contentious media environment of “spin.” French photographers Agnes Varda and JR collaborated to travel throughout France, taking large-scale black-and-white portraits and pasting them up as public art in places that don’t make this country’s picturesque travel reel—a row of abandoned miner’s housing, a rural cluster of unfinished cottages, a chemical factory and a loading dock. While the selection and places and topics provides an alternative, grassroots narrative, this documentary is also about the friendship that develops between the artists, as well as the insecurities and strengths of each, with the octogenarian Varda contributing more insights into class and gender for their creative joint partnership.

Sheila Roberts: Agnes Varda and JR’s captivating documentary, “Faces Places,” celebrates the power of imagination, originality, and what happens when one of the leading figures of the French Nouvelle Vague joins creative forces with an acclaimed photographer/muralist. These unlikely friends, who share a lifelong passion for images, believe every face tells a story. Together, they embark on a transformative journey through the villages of rural France where they meet the locals, exchange stories and ideas, and reminisce. Their collaboration produces epic-size portraits that reveal the humanity of their subjects as well as themselves. The film boasts a wonderfully moving score by Matthieu Chedid and a talented female creative presence that includes DP Claire Duguet, editors Varda and Maxime Pozzi, and executive producer Rosalie Varda.

Pam Grady: Legendary 88-year-old filmmaker Agnes Varda teams up with 33-year-old photographer and street artist JR for an idiosyncratic and glorious road trip in this enchanting documentary that affirms the octogenarian’s buoyant vitality and her youthful companion’s inspired art, huge murals that are as ephemeral as life itself. As the two travel from village to village, typically in JR’s van, which doubles as photo studio and large format printer, we are privy to the everyday people they meet on their trip, from former miners to dockworkers and their wives to goat farmers to a shy cafe waitress surprised to find herself her town’s star tourist attraction when JR pastes her picture, many times life sized to the side of a building. The film provides an uncommon peek into common lives while also letting us eavesdrop on these two artists, one nearing the end of her road and the other in full flower. It’s a warm, teasing relationship–Varda really, really wants JR to take off his dark glasses and reveal himself–animated by their mutual affection, their curiosity about people, and their enthusiasm for their art, and captured gloriously in this glorious film.

Jennifer Merin: In Faces Places, legendary filmmaker Agnes Varda teams with French photographer/muralist JR, journeying through rural France to create art with local folk, document the process and explore their own odd couple friendship. The quirky documentary quickly establishes public art as essential to social welfare — and asvaluable to local business, too — and is a total charmer.

Cate Marquis: What a charmer! Legendary film director Agnes Varda and muralist/photographer JR take us on the most appealing of road trips. In FACES PLACES (Visage Village), they travel around France meeting people, taking photos and turning them into striking giant photo art works plastered on walls and other large surfaces. The van they travel in looks like a giant camera, serving as a mobile photo booth that prints out large posters suitable for plastering on walls. The van attracts attention and also adds a touch of whimsy for the project. Although Varda, a short, round older woman, and JR, a tall, thin young man, look mismatched, they are the perfect pair. Along the way, the filmmaker and the artist joke, tease, debate artistic choices, and talk about life, art, and memories. In their travels, they also meet an array of ordinary people who have their own fascinating stories. Filled with surprising and unexpectedly beautiful images of people and places, FACES PLACES is a perfect little gem of a film, a pleasant way to spend a couple of hours, on the road with two fascinating and ever-curious people as they see what is around the next bend, in life and on the road. Wonderful!

Anne Brodie: Agnes Varda and her young companion, a Jean-Luc Godard look alike and photographer/muralist J.R set off on a mystery tour of France, looking for faces and communities to immortalise in a big way. The plan is to take and paste giant black and white portraits of random people on community buildings. The results are amazing, as faces and bodies of miners, farmers, waitresses, artists, gypsies, church bell ringers, all manner of folk, (and some fish) delighted by suddenly being made 20 feet tall and slapped on their home or barn, any local wall. The best part of Varda’s endearing film is the playful, warm friendship between the 89 year old filmmaker and her young photog; they are close enough to be completely honest with one another with Gallic charm. The various rural and seaside spots they visit serve as rich deposits of “faces” and as backdrops for the beating heart of the matter, their friendship. Varda’s old friend Godard comes up in conversation and his actions leave a lasting impression. Agnes Varda is magnificent!