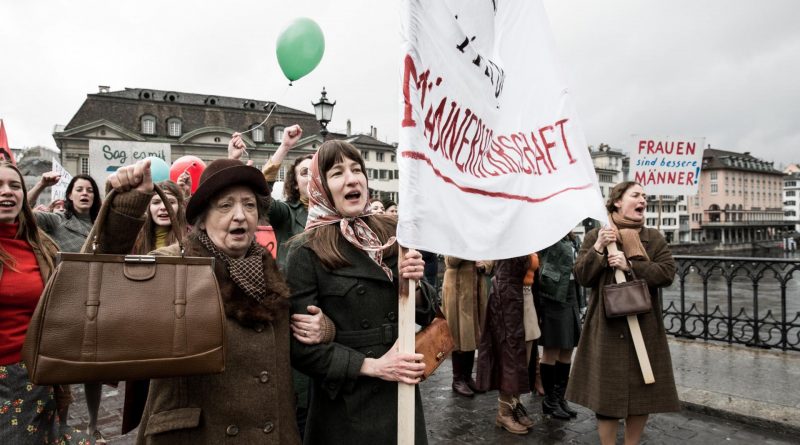 Several decades after the Sexual Revolution swept across the United States (and around the world) during the late 1960s, it’s all too easy to gloss over just how earth-shattering a change the movement for greater feminine freedom made in the lives of so many women and their families, and to women’s roles in society. Petra Volpe’s entertaining political dramedy, The Divine Order, tells the story of unstoppable women who defied local traditions and oppressive husbands to fight for greater personal freedom. The film offers a compelling reminder of why we must continue to press forward for women’s rights. Continue reading… The Divine Order is set in a small Swiss village in 1971, where traditional male/female gender roles are very much entrenched, and no one really thinks about rocking the boat. Even the town’s most successful businesswoman thinks women should feel privileged to care for their homes and children and not “have” to work — or bother about voting. It’s important to note that in Switzerland, women didn’t achieve the right to vote until 1971.

But young wife and mother Nora (Marie Leuenberger) is restless; she wants to do more with her time than take care of her thankless father-in-law and be a drudge on his farm. She secretly sympathizes with her “wild” teenage niece, Hanna (Ella Rumpf), who dares to test the boundaries of their world — and ends up in juvenile prison as a result.

Nora’s growing internal fire is further stoked when she hears more about the country’s upcoming referendum on women’s right to vote. She reads. She talks to other women in the village who dare to walk to the beat of their own drum. And before she really realizes what’s happening, she becomes the literal face of the town’s burgeoning feminist movement, arguing passionately for women’s right to vote, and to work, think, and be independent people.

All of this is much to the chagrin of Nora’s kind-but-slow-to-change husband, Hans (Maximilian Simonischek), who privately supports women’s right to vote but is embarrassed when the other men in town admonish him to control his wife. Things escalate when the bulk of the town’s women go on strike, forcing their husbands to deal with domestic duties while they relax, check out some pro-women’s rights demonstrations, and even attend a sexual-awakening class (turns out that Nora has a tiger between her legs…).

This story of upheaval on a small scale is a powerful reminder of how far women have come — and how far too many still have to go, especially in places where patriarchal traditions rule. Watching Nora wake up to the world around her is enormously satisfying, thanks in no small part to Volpe’s strong script and direction and Leuenberger’s relatable, realistic performance. It’s nice to think of Nora as she might be now, knitting pink hats for her sisters and continuing to fight the good fight. — Betsy Bozdech

Pam Grady: When her husband refuses to allow her to work (his right by law) and her brother-in-law has her teenage niece imprisoned simply for being sexually active and defying his authority, Swiss housewife Nora (Marie Leuenberger) has had enough of what the people in her rural village call “the divine order” where men have ultimate power over women. No longer willing to suffer in silence or live her life without agency, this diffident woman discovers her voice and becomes the local leader in the fight for women’s suffrage. Set in 1971, the year Swiss women gained the right to vote, writer/director Petra Biondina Volpe vividly recreates the era and the village’s social milieu, depicting the derision and opposition Nora faces as well as the family life she is willing to risk for her cause. Leuenberger is luminous as her character embarks on a voyage of self-realization, finding herself along with her cause as she wages revolution on three fronts: political, social, and sexual.

Esther Iverem: A tight, compelling ensemble of actors, led Marie Leuenberger, propels Petra Volpe’s “The Divine Order” into the realm of awards consideration. While the movie follows the attempt of women in a small town in Switzerland to gain the right to vote in 1970—yes 1970—its triumph is in portraying of the human striving for freedom, fairness and respect. The 1970s tornado of social change meets the cold front of patriarchy and viewers are left to figure out where love might fit into the mix.

Liz Whittemore: Impeccably acted and stunningly shot, The Divine Order is a film very much relevant in today’s political climate. In the continued fight against the patriarchy, we must first educate ourselves on how far we’ve come. This film demonstrates the power of women as a collective entity fueled by passion in pursuit of equality. With fully fleshed out female characters that are nuanced and honest, Petra Volpe has given us a true cinematic gift.

Nikki Baughan: Following in the footsteps of Sarah Gavron’s similarly themed Suffragette in its focus on an ordinary woman whose domestic discord opens her eyes to wider issues, this Swiss drama features a brilliant central performance from Marie Leuenberger. Leuenberger is charming and engaging as Nora, housewife and mother in small town Switzerland whose determination to break out of her own limited mould leads her to organise local campaigns supporting women’s right to vote in the run-up to the national vote on the subject in 1971.

MaryAnn Johanson: It’s difficult to believe that as recently as 1971, there were women in Europe who still did not have the legal right to vote! Petra Volpe’s absolutely delightful historical dramedy is set in the midst of a referendum on women’s sufferage, when the wives and mothers in a small conservative Swiss village wake up to revolution ongoing elsewhere and decide to finally advocate for themselves. Funny, wise, and explicitly feminist, this yet another reminder — always a much needed one — that progress does not come easily, but that often even those who fear it will ultimately be much happier for it.

Anne Brodie: It’s incredible to think that women’s right to vote is a relatively recent phenomenon. Tucked away in a tiny Swiss mountain village, just four decades ago, lies a town blessed with freedom-loving, pro-active women willing to change the culture, to rip it from its medieval roots and into the modern age. They want the right to vote! Petra Biondina Volpe’s salute to women who dared stand up to their men undergoes a major tonal shift once the men realise they can’t turn back time once the women have their minds set on freedom. They have ideas and considerable might, more than they expected, and the men react with anger, violence and despair, knowing the culture they were born into and promulgated has gone. Marie Leuenberger plays the young wife and mother who dreams of getting a job and an end to sock washing. Her gentle, open-hearted intelligence and reason win the day; she gets the ball rolling and keeps spirits up in the face of resistance from both sexes, and learns a valuable lesson in sexual expression along the way. Women’s rights can be exciting! Leuenberger hits the nail on the head in balance, authenticity and the ways of human nature and easily carries the film. The scenery is gorgeous, lessons are learned and we’re highly entertained.

Jennifer Merin: Switzerland’s entry for the Best Foreign Film Oscar is a compelling political drama set in 1971 in a quaint rural village where Nora (Marie Leuenberger), a conventional housewife and mother, facing gender oppression on every front, champions a burgeoning suffragette movement that challenges political and religious leaders who cited the Divine Order as reason to keep women in their place. A strong ensemble cast brings the story to its inspirational conclusion when Swiss women finally secure the right to vote in 1971. The Divine Order is a heartfelt and captivating film about women demanding their right to an equal voice.

Cate Marquis: THE DIVINE ORDER is a tale about a group of ordinary women in a Switzerland village who fought for women to get the vote. The surprising part is that this battle for the right to vote took place in 1971. Since American women got the vote in 1920, it’s easy for us to assume Europe quickly followed. But it seems Switzerland missed out on the earlier wave of women’s rights. Which meant that in 1971, Switzerland was catching up on the 1960s Sexual Revolution and the budding 1970s women’s liberation movement, the second time in the 20th century women took to streets to demand their rights. Read full review…