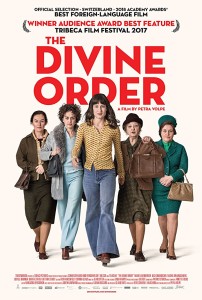 THE DIVINE ORDER is a tale about a group of ordinary women in a Switzerland village who fought for women to get the vote. The surprising part is that this battle for the right to vote took place in 1971. Since American women got the vote in 1920, it’s easy for us to assume Europe quickly followed. But it seems Switzerland missed out on the earlier wave of women’s rights. Which meant that in 1971, Switzerland was catching up on the 1960s Sexual Revolution and the budding 1970s women’s liberation movement, the second time in the 20th century women took to streets to demand their rights. Continue reading…

There isn’t much marching in THE DIVINE ORDER but there is a good dose of comedy as a handful of women in a small Swiss village catch up on half a century’s worth of women’s progress in one big bite. Ironically, it is a woman business owner who leads the campaign to oppose giving women the vote in the upcoming public referendum. While she cites the long-held traditional belief that a “divine order” put men over women, no one seems to notice that she herself wields great power in the village. Still, one day, one ordinary housewife, Nora (Marie Leuenberger), works up the courage to say out loud what others only think – that women should get the vote. It opens to the door to all kinds of changes for the women – and men – in the little village.

THE DIVINE ORDER is warm, touching and quietly, subtly comic at moments perhaps a bit too quiet and subtle. The tone of Petra Volpe’s film is decidedly low-key and proceeds at a deliberate pace. Step-by-slow step, the women challenge the traditions about women’s place, explore feminism sweeping to world, and gradually find their voice over injustices at home. Along the way, they also form a sisterhood. The film features some fine performances, particularly by Marie Leuenberger, along with a sweet sincerity. But while the women explore some issues raised by the growing feminist movement (particularly in one rather comic scene with a New Age-y instructor at a women’s conference they attend in a city), other topics, such as birth control, are never even mentioned. Still, the women and their bond are what gives this unusual story its appeal.