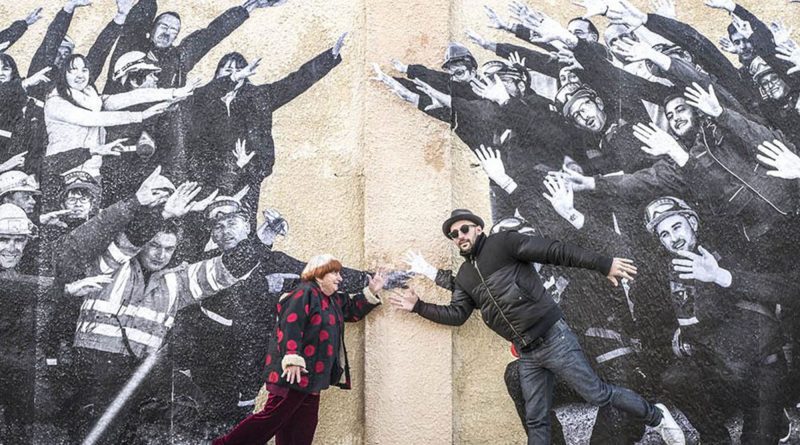 French New Wave pioneer Agnes Varda, who made her first film in 1954, is now 89 years old – and as warm and vital as ever, even if her eyesight is fading. Working with acclaimed 34 year-old French photographer/muralist JR, she shares her lifelong passion for images and how they are created, displayed and shared in this personalized, pastoral documentary. Continue reading…

Together, they travel around France’s villages, farms, factories and beaches in JR’s van, which doubles as a giant-photo booth and is painted to look like a giant camera, encountering ordinary, working-class citizens, learning their stories and crafting oversized portraits of them.

These enormous artistic works are then exhibited on houses, barns, storefronts and trains, documenting the humanity in their subjects – and themselves – along with a unique glimpse of contemporary life.

“Chance has always been my best asset,” Varda claims, referring to her life and her cinema.

As an acknowledgement of women, they photograph dockworkers’ wives in the port city of Le Havre. “It’s good to see a woman standing tall,” Vardas says, as these large-scale, black-and-white pictures are plastered against a massive tower of shipping crates.
They’re ‘odd couple’ vagabonds in the very best sense of the word: short, stocky Agnes Varda with her assortment of colorful sweaters and long, lanky JR with his pork-pie hat and hipster sunglasses.

In both an act of defiance and admission of age, they reenact the exhilarating running-through-the-Louvre scene in Jean-Luc Godard’s “Band of Outsiders” with JR pushing Varda, ensconced in a wheelchair.

As a touching gift, JR pastes a photo of Varda’s late photographer friend Guy Bourdin onto the side of a collapsed Nazi-era bunker on a Normandy beach, only to realize that a short time later, the tides will wash this commemorative away. It’s a precious, melancholy moment, coupled with the realization that people are forever destined to fade.

And in a poignant, concluding tribute, JR finally takes off his sunglasses.

In French with English subtitles, on the Granger Movie Gauge of 1 to 10, “Faces Places” is an unforgettable, irresistible 8, a restorative road trip.