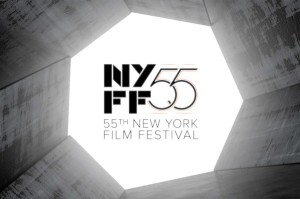 This year’s festival was not lacking in gorgeously acted roles. Here is a list of 10 notable performances that I believe deserve attention. I will preface this list by saying I was unable to see Wonderstruck and Lady Bird. I am hearing nothing but praise for Julianne Moore‘s dual roles, newcomer Millicent Simmonds, and Saoirse Ronan. Of the 10 performances, only 7 films are represented. In no particular order, here are some ladies to be on the lookout for come awards season and beyond. Continue reading… 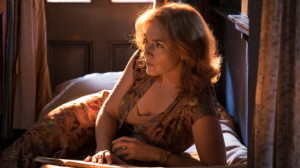 Kate Winslet for Wonderwheel. This portrayal feels like a bit of a departure somehow. The character feels beneath the grace of a woman we are so used to seeing in high-class roles. In this sense, it simply leads us to applaud Kate for fleshing out a flawed woman with wit and sadness. Wonderwheel is extremely stylistic but that should be surprising since it’s Woody Allen, and so as not to give anything away, let me just say that we would be lucky to see more of Winslet’s face on Broadway.

In a career spanning 50 years and almost as many features, Woody Allen has periodically refined, reinvented, and redefined the terms of his art, and that’s exactly what he does with his daring new film. We’re in Coney Island in the 1950s. A lifeguard (Justin Timberlake) tells us a story that just might be filtered through his vivid imagination: a middle-aged carousel operator (James Belushi) and his beleaguered wife (Kate Winslet), who eke out a living on the boardwalk, are visited by his estranged daughter (Juno Temple)—a situation from which layer upon layer of all-too-human complications develop. Allen and his cinematographer, the great Vittorio Storaro, working with a remarkable cast led by Winslet in a startlingly brave, powerhouse performance, have created a bracing and truly surprising movie experience. An Amazon Studios release. 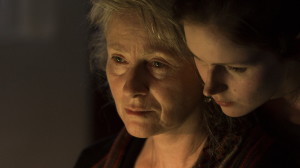 Agnieszka Mandat in Spoor. We are privileged and challenged with a mystery in this film. Mandat plays Janina with a feverish passion that will likely throw you for a loop. You cannot help but be swept up in her deeply emotional love for animals and sense of stubborn justice-seeking.

Janina Duszejko (Agnieszka Mandat) is a vigorous former engineer, part-time teacher, and animal activist, living in a near wilderness on the Polish-Czech border, where hunting is the favored year-round sport of the corrupt men who rule the region. When a series of hunters die mysteriously, Janina wonders if the animals are taking revenge, which doesn’t stop the police from coming after her. A brilliant, passionate director, Agnieszka Holland—who like Janina comes from a generation that learned to fight authoritarianism by any means necessary—forges a sprawling, wildly beautiful, emotionally enveloping film that earns its vision of utopia. It’s at once a phantasmagorical murder mystery, a tender, late-blooming love story, and a resistance and rescue thriller. 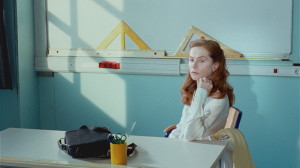 Isabelle Huppert for Mrs. Hyde. Huppert is a festival staple, sometimes appearing in more than one film year after year. While the film as a whole was a bit convoluted for my taste, this performance is a standout. We get to see a different side of Huppert as a timid and awkward  (and downright terrible) teacher. But it is the moments, of “Jekyll” and Mrs. Hyde, where the story shines the most, reminding us why she was nominated for last year’s performance in Elle.

Serge Bozon’s eccentric comedic thriller is loosely based on Robert Louis Stevenson’s The Strange Case of Dr Jekyll and Mr. Hyde, with many a twist. Mrs. Géquil (Isabelle Huppert), a timid and rather peculiar physics professor, teaches in a suburban technical high school. Apart from her quiet married life with her gentle stay-at-home husband, she is mocked and despised on a daily basis by pretty much everyone around her—headmaster, colleagues, students. During a dark, stormy night, she is struck by lightning and wakes up a decidedly different person, a newly powerful Mrs. Hyde with mysterious energy and uncontrollable powers. Highlighted by Bozon’s brilliant mise en scène, Isabelle Huppert hypnotizes us again, securing her place as the ultimate queen of the screen. Special thanks to uniFrance. 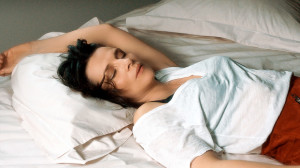 Juliette Binoche in Let The Sun Shine In. Another film that did not resonate with me as much as I would have liked it to does not for a moment take away from the fact that Binoche is a screen legend. As a woman desperately seeking love and affection, we see sensuality, disdain, and heartbroken moments in a seemingly endless line of failed relationships. Fragile and yet commanding, Binoche captures your sense of romance, lust, and hope effortlessly.

Juliette Binoche is both incandescent and emotionally raw in Claire Denis’s extraordinary new film as Isabelle, a middle-aged Parisian artist in search of definitive love. The film moves elliptically, as though set to some mysterious bio-rhythm, from one romantic/emotional attachment to another: from the boorish married lover (Xavier Beauvois); to the subtly histrionic actor (Nicolas Duvauchelle), also married; to the dreamboat hairdresser (Paul Blain); to the gentle man (Alex Descas) not quite ready for commitment to . . . a mysterious fortune-teller. Appropriately enough, Let the Sunshine In (very loosely inspired by Roland Barthes’s A Lover’s Discourse) feels like it’s been lit from within; it was lit from without by Denis’s longtime cinematographer Agnès Godard. It is also very funny. A Sundance Selects release. Special thanks to uniFrance. 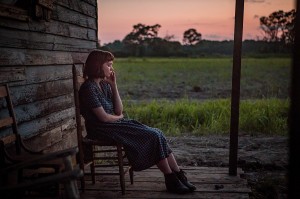 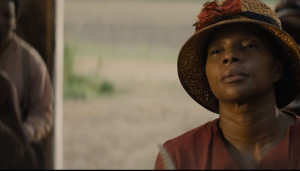 Mary J. Blige & Carey Mulligan for Mudbound. Two mothers from completely different backgrounds are stunning foils for one another. Each enduring the rule of a man due to place and time and yet able to put their foot down as a mother need do for her family. Blige’s performance sneaks up on you. Quietly strong and honestly given. If you did now know it was her going into the film, you may think it was some major award-winning actress that you didn’t recognize. Mulligan is tender and tough as an almost forgotten better half. Narration from each character adds to the depth of the novel turned Dee Rees adaptation. Mudbound gives Blige and Mulligan a chance to play against and with the other without fear.

Writer-director Dee Rees’s historical epic, based on the novel by Hillary Jordan, details the daily hardships and vicissitudes of farm life in Mississippi during the post–World War II era. Two families, one white (the landlords) and one black (the sharecroppers), work the same miserable piece of farmland. Out of need and empathy, the mothers of the two families bond as their younger male relatives go off to war and learn that there is a world beyond racial hatred and fear. The flawless ensemble cast includes Carey Mulligan, Mary J. Blige, Garrett Hedlund, Jason Mitchell, Jason Clarke, Rob Morgan, and Jonathan Banks. A Netflix release. 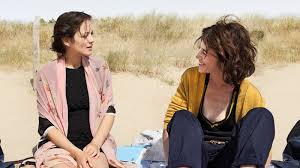 Marion Cotillard & Charlotte Gainsbourg in Ismael’s Ghosts, Director’s Cut.  Two more festival staples, much like Huppert and Binoche, that have jumped from French cinema to Hollywood as relative household names. Cottliard gives us a dramatic and sexy backstory. She makes us yearn for her even when we know we shouldn’t. Gainsbourg is shyer but no less sexual. Her intellectual sorrow and practicality attach to the viewer, allowing her loss to become ours. While opposites in character, there is something magnetic about the scenes they share, carrying Ismael’s Ghosts beyond it haunting premise.

Phantoms swirl around Ismael (Mathieu Amalric), a filmmaker in the throes of writing a spy thriller based on the unlikely escapades of his brother, Ivan Dedalus (Louis Garrel). His only true stability, his relationship with Sylvia (Charlotte Gainsbourg), is upended, as is the life of his Jewish documentarian mentor and father-in-law (László Szabó), when Ismael’s wife Carlotta (Marion Cotillard), who disappeared twenty years earlier, returns, and, like one of Hitchcock’s fragile, delusional femmes fatales, expects that her husband and father are still in thrall to her. A brilliant shape-shifter—part farce, part melodrama—Ismael’s Ghosts is finally about the process of creating a work of art and all the madness that requires. A Magnolia Pictures release. Special thanks to uniFrance. 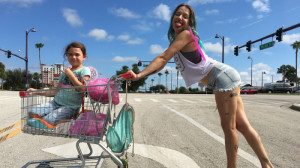 Bria Vinaite & Brooklynn Prince for The Florida Project. Two complete unknowns are the keys to this extraordinary work. With a documentary feel to the entire film, the audience is essentially a fly on the wall to a segment of the country that is far too often ignored. Vinaite is a young mother who will do anything to pay the weekly rent as long as it keeps her 6-year-old with a roof over her head. Con-artist, panhandling, and the like lead us to what one might assume to be a selfish woman, but this could not be further from the truth. Once the details of their stories are revealed you cannot help but fall in love with both of these ladies but for very different reasons. A crass mother begets a rambunctious and wildly endearing performance out of Prince. This little girl has enough spirit to out-act any grownup she shares the screen with. Her curiosity and innocence lend to one hell of a breakthrough performance. Vinaite and Prince’s chemistry makes Sean Baker‘s direction look like a breeze. You will, no doubt, be seeing much more of these two for years to come.

A six-year-old girl (the remarkable Brooklynn Prince) and her two best friends run wild on the grounds of a week-by-week motel complex on the edge of Orlando’s Disney World. Meanwhile, her mother (talented novice Bria Vinaite) desperately tries to cajole the motel manager (an ever-surprising Willem Dafoe) to turn a blind eye to the way she pays the rent. A film about but not for kids, Baker’s depiction of childhood on the margins has fierce energy, tenderness, and great beauty. After the ingenuity of his iPhone-shot 2015 breakout Tangerine, Baker reasserts his commitment to 35mm film with sun-blasted images that evoke a young girl’s vision of adventure and endurance beyond heartbreak. An A24 release.