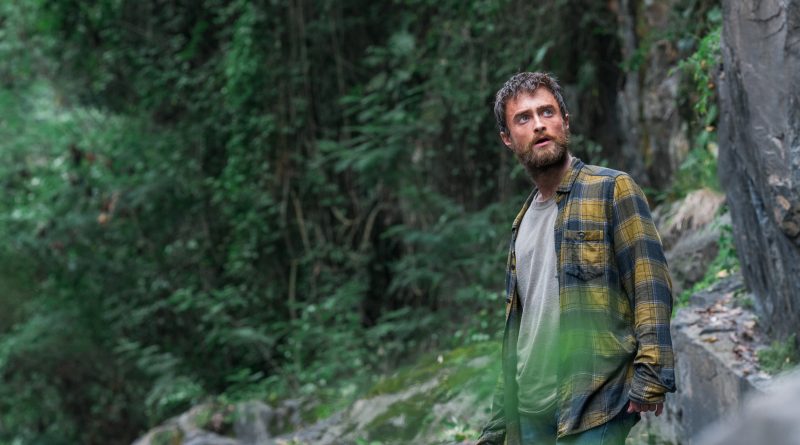 There are two extraordinary aspects to Australian director Greg McLean’s latest adventure: 1) it’s based on a true story, and 2) diminutive Daniel Radcliffe actually starved himself to emaciation to achieve authenticity.

In 1981, when 21 year-old Yossi Ghinsberg (Radcliffe) leaves his family in Tel Aviv to spend a year traveling in the United States and South America, they fear the worst – perhaps with good reason when he joins a backpacking expedition in Bolivia.

Friendly, gullible Yossi is befriended in La Paz by enigmatic Karl Ruchprecter (Thomas Kretschmann), an Austrian who spins tales about lost Inca tribes and rivers of gold, hidden deep in the Amazonian jungle.

As their trail-leader, Karl claims not only to know the rainforest territory but he also shows them a map, indicating just where they’ll walk. Arrogantly, he sets a gung-ho pace which soon causes enough friction that the original foursome decide to split into pairs.

While Karl and Marcus, whose feet are badly blistered, continue to trudge on-foot, impatient Kevin opts to build a raft to sail down the rapids, accompanied by Yossi. But shortly after they’re launched, the rickety raft crashes into a rock, and Yossi is thrown into the churning water.
Wearily dragging himself to shore with a bad head wound, Yossi is all alone – with Kevin nowhere to be found. It is man-versus-nature, as Yossi encounters one ominous obstacle after another, grievously suffering, both physically and mentally.

Based on Yossi Ghinsberg 2005 memoir, it’s scripted by Justin Monjo, who fails to properly flesh out any of the supporting characters, concentrating totally on Yossi and his drug-enhanced hallucinations.

On the Granger Movie Gauge of 1 to 10, Jungle is a survivalist 6 – and kudos to Daniel Radcliffe for rising to this grueling wilderness challenge.