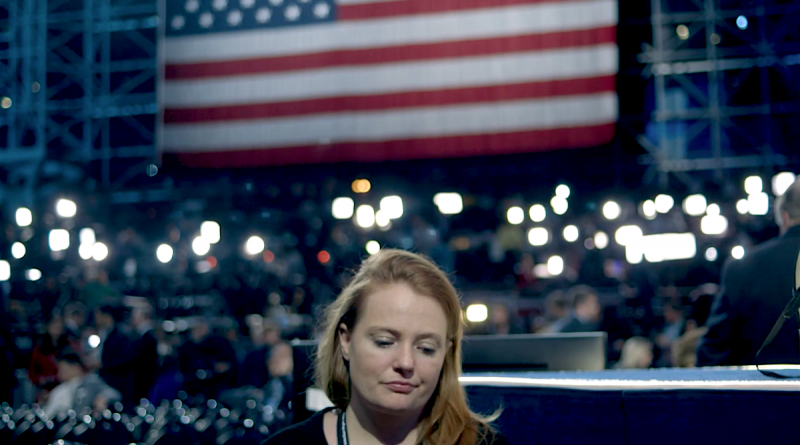 Anticipation. Excitement. Hope. Worry. Fear. Anger. Despair. On November 8, 2016 — election day — tens of millions of Americans felt one, many, or all of those emotions, no matter who they voted for. And the wide-ranging, collaborative documentary “11/8/16” brings all of those big feelings right back to the forefront as it chronicles a day that many of us wish we could forget (or at least do over) but that history will always remember. Continue reading…

The film introduces viewers to voters/citizens in every part of the United States, from the beaches of Hawaii to the city streets of Chicago to the coal mines of West Virginia. They come from all walks of life, every shade of the political spectrum, and a wide range of races and socio-economic statuses. Most are eagerly anticipating the outcome of the election — one way or the other — while a few are barely aware it’s taking place. But virtually all end up riveted to election news as the day’s unforgettable events unfold.

With 18 credited directors, “11/8/16” is a true team effort by filmmakers who, seeing an historic moment, worked together to record it for posterity. Following the day’s events as they progress — and dividing the film into sections based on time of day (morning, afternoon, etc.) — “11/8/16” touches on all of the hot-button issues that made the 2016 election unprecedented, from Donald Trump’s crude comments about casual sexual assault to allegations of corruption involving Hillary Clinton.

Don’t be surprised if you find yourself re-living your own gamut of election day feelings as you watch “11/8/16” — or if you catch yourself talking at/back to the people who now seem naive/clueless/misguided with the benefit of 20/20 hindsight. But the main question most viewers will likely be left with is, “how do these folks feel now, a year in?”

Is the Massachusetts business owner with the Make America Great Again hat happy with how the economy is doing? Have the devastated Hillary supporters found ways to fight for what they believe in? Do the people who steadfastly claimed a year ago that anyone under investigation by the FBI shouldn’t be president apply that same criteria to the man currently in the Oval Office? Consider this an official call for “11/8/17.” — Betsy Bozdech

Nikki Baughan: A fascinating and well-crafted portrait of grass-roots democracy in action, 11/8/16 also offers a vibrant snapshot of a country defined by both its divided national politics and its unified local communities. On election day 2016, cameras travel the length and breadth of the United States, following voters, campaigners, commentators and activists from across the political spectrum as they gear up to find out whether Hilary Clinton or Donald Trump will be their next president. Read full review..
MaryAnn Johanson: Almost a year on from the inaugration, I think it’s safe to say that the Trump presidency has been at least as bad as many of us feared, and arguably even worse. So it’s often difficult to watch this documentary roundup of Election Day 2016 and see how confident so many people — including Trump supporters — were that Clinton would win. It’s even worse to see the genuine pain, even horror, on the faces of so many women late that night, after Trump had been announced as the winner. This is an important document of one very important day in American history, one that let American women know how little valued we are.

Anne Brodie: 11/8/6 takes us back to that night of the Presidential Election of 2016, as people across the political and ideological spectrum waited for the election results. No spoiler here to say the media got it wrong, it didn’t count on certain demographics that ultimately elected Trump President, surely a major embarrassment to ABC, NBC, CNN and CBS. The film was a revelation to me, a person who lives in a country that prides itself on inclusion, complete diversity, free university tuition and healthcare. There is talk of guaranteed income, i.e. no one left behind, wherever you come from. I am officially frightened for America. It seems to be in a bad situation where there is no compromise and no one gets on my turf. Wouldn’t it be interesting to bring together the folks profiled in the doc waiting on the election results again and ask them their thoughts now, all these horrible months in? One thing is certain about this doc – it will rile you up. Read full review.

Sheila Roberts: On Election Day 2016, in a deeply divided America, 18 respected documentary filmmakers construct a compelling mosaic of 16 subjects at the grassroots level across the country with diverse backgrounds, life experiences, and political points of view. “11/8/16” is a timely chronicle of events on that historic day that captures their thoughts on the election process, their hopes for the future, and their reactions to the dramatic outcome. Most inspiring is what the film reveals about their humanity and shared love of country despite vastly different perspectives.

Pam Grady: Political junkies may well revel in this visit to election day 2016 in which 18 filmmakers focus on 16 individuals and their surrounding communities, taking a remarkably even-handed pulse of the national mood as the Trump/Clinton campaigns reached the finish line. But, frankly, however well-made and well-intentioned, this documentary made this viewer crazy as too often voters come across as ill-informed, deluded by self-interest, or voting for a president as if they are voting for a homecoming queen, purely on the basis of personality. Perhaps it’s just too soon to revisit that toxic election. But, then again, it might always be too soon.

Esther Iverem: Regardless of your choices in and opinion about the 2016 U.S. presidential election, the documentary “11/8/16” provides a snapshot of that pivotal day that will ring true. The veracity comes through the up-close portraits of American voters across the country—Black, White, Latino, young, old, urban and rural—who we see in real time make up the mosaic of decisions that determined the outcome of the election and Donald Trump ascending to the presidency. The movie does suffer from a binary, election-day constraint and so a glaring omission from the mosaic are voices of disaffected voters from both the Democratic and Republican parties. While “11/8/16” does slightly favor the perspective of Hillary Clinton supporters, it compensates for this fact at the start by citing polls that she was expected to win handily.

Jennifer Merin: Whether your political stance is left or right, Democrat or Republican, this election day documentary is an eye opener, a challenge for all to think deeply about how we make political decisions and about the consequences of the decisions we make. Beautifully edited, and shot by a consortium of documentary filmmakers working simultaneously across the nation, 11/8/16 presents a compelling, pulsating patchwork view of our cultural landscape and our democracy in process. A must see.

Nell Minow: No matter where you were, no matter who you voted for or how you stand on the issues, this balanced, illuminating, and reassuring look at 24 hours of election day 2016 will surprise you with it’s portrayal of Americans as United, if not in their candidates, in their passion for family, community, and making things better.