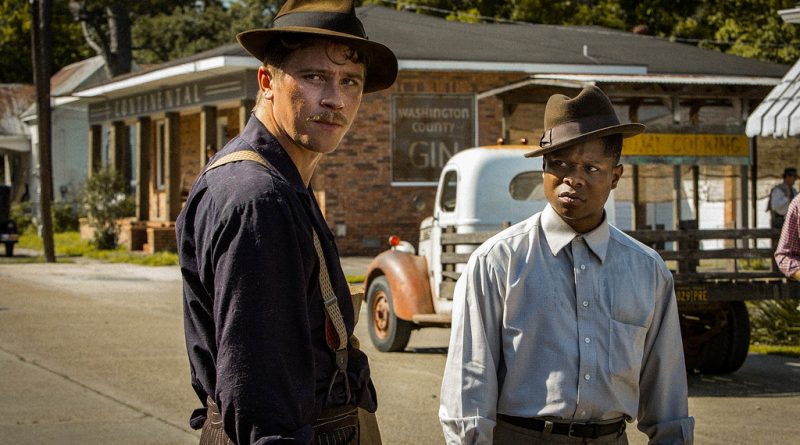 Telling the intertwining stories of two families — one white, one black — living on the same piece of rural Mississippi farmland in the 1940s, Dee Rees‘ Mudbound blends strong performances, notable cinematography, and heartbreaking human drama. It’s clear things are going to get grim from the opening sequence, in which adult brothers Henry and Jamie McAllan (played by Jason Clarke and Garrett Hedlund, respectively) try to bury their father despite the onslaught of a torrential downpour, which leaves both men shaken and covered in mud. 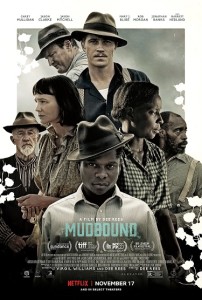 But things weren’t always so dark for the McAllan brothers. Flashbacks narrated by Henry’s wife, Laura (Carey Mulligan), capture a happier, pre-WWII time. A grateful, demure Laura is saved from becoming an old maid by Henry’s attentions. Even though it turns out to be worldly Jamie who brings a spark of true passion to Laura’s step, she marries Henry. And they build a happy life together (including children), until finances force them to move to the decrepit shack out on the family’s farm. Even then, they might have been content, were it not for the poisonous presence of Henry and Jamie’s acid-tongued, virulently racist father, Pappy (Jonathan Banks).

Pappy’s outspoken prejudice isn’t eased by the Jackson family’s presence nearby. Black sharecroppers longing to escape to a piece of land of their very own, Florence and Hap Jackson (Mary J. Blige and Rob Morgan) are proud and hardworking, so the McAllans’ assumed superiority is hard to stomach. But the two families manage to strike a cautious balance … until Jamie and the Jacksons’ son, Ronsel (Jason Mitchell), return from the war. The two veterans find that they have much in common, including being fed up with the backwards attitudes that hold sway in Mississippi — attitudes that ultimately put their friendship, and both families, to the most extreme test imaginable.

“Mudbound” (based on the novel by Hillary Jordan) is, at times, almost physically painful to watch. And the hatred, fear, and intolerance that run rampant are even more agonizing because you know things like this actually happened — and that some people still feel the same way about those who aren’t like them. But it’s essential to remember every party of our history, even the things most of us wish we could forget, and Rees, who both directed the film and co-wrote the screenplay, deserves kudos for telling this story. — Betsy Bozdech

Susan Wloszczyna: Mudbound gets under your skin early and often as the indecencies and horrors of the Jim Crow-era South define and shape the destinies of two families – one white, one black – who are tied together by the land they share. Director and co-writer Dee Rees uses this common ground as a building block for a series of fascinating relationships. The owner of the land, patriarch Jason Clarke, treats his black tenant (Rob Morgan), as an indentured servant. Meanwhile, their wives – Carey Mulligan and Mary J. Blige (a pensive powerful presence) — form a silent female bond as a way to survive their harsh existence. Two World War II heroes –Clarke’s brother (Garrett Hedlund) and Blige’s son (Jason Mitchell) — find solace in a friendship defined by drinking, nightmarish memories of combat and a bold defiance of the ingrained racism and violence of their community. While the backdrop is domestic, Mudbound never stints on showing the nightmarish treatment of black citizens long after the Civil War. What 12 Years a Slave did for plantation life, this haunting drama does for a farming community still mired in hate and fear.

Nell Minow: “Mudbound” gives us two families who mirror and illuminate each other. One is black and one is white, but both have sons changed by war, both struggle with making a living on the land, both have women who dream of a wider world, both resent and disappoint each other but rely on and admire each other, too. Writer/director Dee Rees brings a warm humanity to each character, even the most hateful

Nikki Baughan: In Mudbound, director Dee Rees turns Hillary Jordan’s novel into a searing, scathing look at America’s troubled history of race relations. Set in Mississippi during and immediately after World War II, it effectively distills wide-reaching issues of bigotry and prejudice through the experiences of two farming families; one white, one black. The former, headed by Henry (Jason Clarke) have decided to relocate from the city to make their living as farmers; the latter, headed by the fiercely proud Hap (Rob Morgan), toils the land for their white landlords, struggling to survive while dreaming of owning land of their own. When Henry’s brother Jamie (Garrett Hedlund) and Hap’s son Ronsell (Jason Mitchell) return home much changed after fighting for their country in the war, both struggle to fit back into a society that remains as cruel and divided as it ever was. With its excellent cast, measured approach and devastatingly relevant message, Mudbound proves to be a visceral and essential piece of filmmaking that, despite its period setting, hums with contemporary cultural resonance.

MaryAnn Johanson: Dee Rees’s marvelous film is of course a terrific look at racism in the rural South in the 1940s: I particularly love how it shows how its two WWII veterans, one black and one white, are changed by their experiences of race relations in Europe and in the US Army during the war, that they discover that the way things have been in America are not automatically the way they must be, that their world could be better and fairer. But *Mudbound* is also a feminist film in that its two central female characters, Carey Mulligan and Mary J. Blige’s wives and mothers — again, one white and one black — push back against the role of dutiful, obedient helpmeet to their husbands to assert themselves and demand that their own needs and desires be met, not just for themselves but to improve life for their children. This complex film is, then, ultimately all about how racism and sexism are intertwined, and how justice in one realm cannot be separated from the other.

Anne Brodie: Mudbound‘s set firmly in the world of rural southern race culture and its as uncomfortable a film as that suggests. It’s also a masterful work by filmmaker Dee Rees and powerful performances from each and every actor. Mary J. Blige has her Burning Bed moment in a gorgeous, measured and mature performance of an artist. Pappy, the racist, poisonous old man is played with hellfire by Jonathan Banks is unforgettable and his sons played by Jason Clarke and Garret Hedlund show us degrees of humanity and compassion within that rancid world of ancient hatred. The poetry of the film found in the natural world and the quiet moments of trust and love put in sharp contrast the senseless cruelty of systemic racism; both experiences are powerful and meaningful because these worlds existed for hundreds of years. Not a proud time in American history but a time we mustn’t forget.

Sheila Roberts: Filmmaker Dee Rees assembles a powerful ensemble cast in “Mudbound” to bring to life Hillary Jordan’s international bestseller about two families living in rural Mississippi following WWII who face the harsh realities of farming and the brutal social barriers of the Jim Crow South. Confidently directed by Rees from a script she co-wrote with Virgil Williams, the film features vivid character portrayals by Garrett Hedlund, Jason Mitchell and Carey Mulligan along with solid contributions to the film’s excellent production values by a number of talented women. These include DP Rachel Morrison’s gorgeously lit yet gritty cinematography, editor Mako Kamitsuna’s exquisitely interwoven storylines, and composer Tamar-Kali Brown’s riveting score. This is a must-see film with strong performances that promises to be among this year’s strong Oscar contenders and Netflix’s first feature to compete at the Academy Awards.

Jennifer Merin: Dee Rees cinematic adaptation of Hillary Jordan’s novel is epic in scope. The story introduces two war-weary veterans — one black, the other white — who return home to rural Mississippi where prevailing racism and poverty put them into another harrowing combat zone. The scenario, resonating with current concerns about contemporary combat veterans’ suffering from PTSD and their difficulties in re-entering society, reflects the racism that continues to plague our nation, and answers the demand for more diverse points of view in cinema. The cast is superb. The cinematography stunning. Honoring her for her accomplishment with Mudbound, AWFJ has focused our November SPOTLIGHT on Dee Rees.

Liz Whittemore: Mudbound is the story of a sharecropper and a landlord, two families inhabiting the same Mississippi farmland. Both having soldiers dealing with the aftermath of WW1, both with a father attempting to profit from their soil. Two mothers from completely different backgrounds are stunning foils for one another. Each enduring the rule of a man due to place and time and yet able to put their foot down as a mother need do for her family. Mary J. Blige’s performance sneaks up on you. Quietly strong and honestly given. Carey Mulligan is tender and tough as an almost forgotten better half. Narration from each character adds to the depth of the novel turned Dee Rees adaptation. Each character has a counterpart and experiencing these performances allows us to understand how we’re not so different from one another, after all.

Dorothy Woodend: There is a good film buried in the midst of director Dees Rees’s Mudbound, but it is covered over with turgid dramaturgy, overlapping narratives, and a determination to seemingly include every possible horror and affliction that might attend rural life in 1940s Mississippi. Miscarriage, murder, poverty, and endemic racism, all set in a brackish sea of dreariness, is enough to make a body despair of humanity. The tale of two families, each struggling to make a go of farming is sturdy enough stuff, although, not terribly riveting to watch. Things get much more interesting when two young men – one white, one black – return from the European theatre of WWII and discover a shared bond. The consequences of their friendship are inevitable, and you wait for the punishment to be meted out with a certain resignation. Sure enough, the white hoods show up, and blood runs cold. To be fair the film is beautifully shot, with painterly vistas of the Mississippi Delta that are almost Turneresque in their gray-brown beauty. The acting is also blue chip with Mary J. Blige, Carey Mulligan and Garrett Hedlund as particular standouts. But the most interesting part of the film gets a bit lost, amongst the histrionics of violence, and melodrama. The conversations between two men, exploring their commonalities and differences, over a bottle of whiskey provide the most fascinating and subtle moments. The genesis of their shared understanding is drama enough.

Cynthia Fuchs: Mudbound begins with digging. The screen is black, the sound unmistakable. The scene that emerges takes place at night: two brothers are digging a grave for their father. A storm is coming, so Henry (Jason Clarke) and Jamie (Garrett Hedlund) are in a hurry. “We ain’t gonna make it,” mutters Jamie. Henry insists that they will, that they have to. “That was my brother Henry,” narrates Jamie. “Absolutely certain whatever he wanted to happen would. Certain his little brother would never betray him.” Read full review.