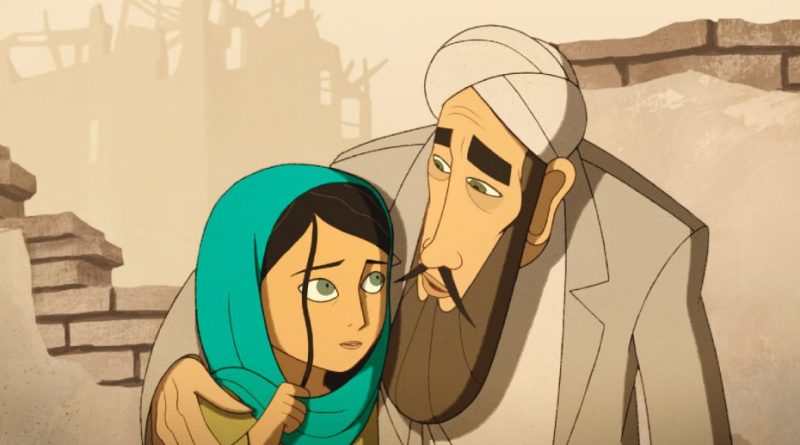 The Breadwinner is a powerful, gorgeously animated film about Parvana, a remarkable little girl caught in untenable circumstances in Taliban-controlled Kabul, Afghanistan. From the studio and filmmakers who previously gave us The Secret of Kells and other animated gems, “The Breadwinner” isn’t your typical mainstream “cartoon” fare. Based on the same-named novel by Deborah Ellis (who has co-screenwriting credit with Anita Doron), director Nora Twomey’s remarkable film tells a deep, thoughtful story replete with elements of both pain and joy, despair and hope. Continue reading… As the story begins, the Taliban arrests Parvana’s father for the crime of having had a foreign education and hauls him off to prison. Since women and girls aren’t allowed to do much of anything, including even appearing by themselves in public, Parvana, her sister, and her mother are left adrift, unable to even go to the market to buy food.

After Parvana’s mother is beaten for daring to go out in search of her husband, Parvana (voiced by Saara Chaudry) makes the radical decision to cut off her beautiful long hair and pass as a boy — both so she can venture out for supplies, and so she can try to locate her father.

Being a boy gives Parvana newfound freedom, especially after she befriends anothr girl in disguise, Shauzia (Soma Chhaya), and the two start earning a little money doing odd jobs and selling things. But always, Parvana is focused on finding — and freeing — her father. To do so, she must learn to trust a man she helps in the bazaar, as well as dodge suspicious bullies, all while trying her best to keep her family together and fed — no matter what.

The extreme hardship of being a girl/woman under Taliban rule is agonizingly clear in The Breadwinner, which is no Disneyfied tale of a plucky princess. Parvana’s mother has zero options after her husband is arrested. Alone and having been physically assaulted, she is depressed and so desperate she’s even willing to promise her older daughter, Soraya, in marriage to a distant cousin for the slim chance of getting her family out of Kabul. It doesn’t work out, but little does in this world of social and political repression.

Thanks, though, to Parvana’s empathy for the right person — and her unfailing gumption — she ultimately gets a one in a million chance.

This is serious, weighty stuff for an animated film, but Twomey never disappoints. The beautifully told and very moving story, strong voice cast performances, and rich, evocative visuals combine to give vivid life to a tale that needs to be told. If only all the oppressed women and girls around the world had a real life Parvana to bring them food — and hope. May her inspiring story and this exceptional film do so in her stead. — Betsy Bozdech

MaryAnn Johanson: “Opportunity” means something radically different and simpler than what we’re used to for young Parvana, growing up in Kabul under the Taliban in 2001. When her father is unjustly arrested and her family is left with no male chaperone for her, her older sister, and her mother, she disguises herself as a boy out of necessity, so that she can earn money and buy food, neither of which could she do as a girl. But the joy she finds in her new freedom to move about in public is tempered with danger, of course, for if she is discovered, she will be beaten, or worse. The injustice and inequality to which girls and women are subjected, not just under Taliban rule but wherever we are treated as less-than, takes a smart smack from Parvana’s brains and bravery. There are no limits to what girls and women can do, *The Breadwinner* knows, except those placed on us.

Sheila Roberts: Nora Twomey’s “The Breadwinner,” co-adapted by Twomey and Anita Doron from Deborah Ellis’s award-winning novel, is a strong candidate for one of this year’s five nominees in the Academy Awards Animated Feature Film category. Produced by Angelina Jolie, the first feature project for Guru Studios is an unforgettably magical and inspiring coming-of-age tale about a young Afghan girl who must disguise herself as a young boy to support her impoverished family. Parvana confronts repression, danger, and seemingly insurmountable odds with courage, creativity, and resilience in Taliban-controlled Kabul. Twomey is adept at conveying a powerful and poignant message about equal opportunity and justice for women in a country devastated by war and political conflict. Noteworthy is her mastery of rich, vibrant colors and her ability to blend traditional Afghan-inspired imagery with cel animation. This is an engaging, beautifully animated story told with passion, economy, and sometimes even a welcome sense of humor.

Nikki Baughan: After making short films and serving as co-director on Oscar-nominated 2009 animation The Secret of Kells, Irish filmmaker Nora Twomey makes her feature debut with this powerful animated adaptation of the novel by Deborah Ellis about a young girl living under Taliban rule in Kabul. When her father is imprisoned for alleged crimes against Sharia law, headstrong Parvana disguises herself as a boy so she can go out to work and provide for her family. Showing the overwhelming injustices of an entire country through the eyes of a child forced to grow up fast, The Breadwinner is a hard-hitting and undeniably difficult watch. That Parvana’s mother is sick, and her older brother already lost to the war, piles personal pain on top of the difficulties of life where women are regarded as second class citizens, and treated with violence and contempt. Yet Parvana’s strength of spirit, bravery and determination to follow her true path despite ever-present dangers give The Breadwinner a sense of hope, and she is the charming, deserving heroine of a perilous quest narrative usually reserved for male characters. Stunning, evocative animation, which blends modern cel techniques with traditional Middle Eastern visual styles, underscores the desperate emotions at play, with sequences in which Parvana thinks of her brother for guidance being particularly impressive.

Jennifer Merin: The Breadwinner is a stunning animated film that presents the story of an enterprising and brave young girl who disguises herself as a boy in order to provide for her impoverished and politically beleaguered family in Kabul, Afghanistan. Directed by Nora Twomy, written by Anita Doron and Deborah Ellis and produced by Angelina Jolie, the film is a beautifully realized and very convincing call for equal opportunity and justice for women in Afghanistan and wherever repression exists. The use of animation is perfectly appropriate for old and young viewers, and the beautifully crafted film is an example of wonderful artistry that can help to make positive changes in our troubled world.

Jeanne Wolf: The Breadwinner may be animated but it’s not a just a fun cartoon. The wonderful pictures provide a simple line through a complicated and heartbreaking situation. The heart-wrenching story will draw you in as it pulls back the veil on the repression and suffering in Afghanistan. When her father is taken to prison, young Pavana masquerades as a boy to move among the Taliban who have no use for women. As the threat of a war is everywhere, her brave journey to save her family drives a film that mixes myth with harsh reality. Parvana’s courage offers some hope that maybe the future will be brighter. Directed by Nora Twomey (“Secret of the Kells”), “The Breadwinner” got an extra boost when Angelina Jolie signed on as Executive Producer. Hopefully, that will help draw an audience to a movie you shouldn’t miss.

Cynthia Fuchs: “Stay inside where you belong.” Again and again in The Breadwinner, 11-year-old Parvana (Saara Chaudry) is reminded of her place. A girl in 2001 Kabul, she’s surrounded by war and threatened by the Taliban. She’s not supposed to read, think for herself, or go outside without a man, she’s not supposed to show her face and she’s certainly not supposed to work a job. A the same time, however, her father Nurullah (Ali Badshah), a teacher, encourages her to explore the world around her, to feel confident and to tell and listen to stories, because, he says, “Stories remain in our hearts even when all else is gone.” Read full review

Esther Iverem: It’s hard not to love “The Breadwinner.” It is beautifully rendered and tells a moving story about the sweet and spunky Parvana, a doe-eyed beauty who is forced to dress as a boy to make a living for her family under the despotic, anti-woman rule of the Taliban in Afghanistan. Set just before the U.S. invasion in 2001, “The Breadwinner” sets up the ultimate hero versus villain plot but may feel dated and perhaps even political motivated as the invasion has since killed thousands of civilians and as the U.S. ratchets up further what is the longest-running war in U.S. history—and this time not targeting Al-Qaeda but, rather, the Taliban.

Cate Marquis: In the beautifully-animated, heart-breaking THE BREADWINNER, a young Afghan girl disguises herself as a boy in order to help her family survive, after her father is imprisoned by the Taliban. Telling the story through the eyes of the girl gives us a unique view of the harsh life of girls and women particularly, under the Taliban’s harsh restrictions. Under Taliban rule, her father, a former teacher, had been reduced to a street vendor, offering to read or write letters for a fee. When he is arrested, for no particular reason, the family faces a dilemma because the only other male in the family is a very small boy. The Taliban have roving groups set on enforcing the rules that women not leave the home with a male relative. Time and again we see them harass women and girls, dismissing the practical quandary they are facing. Her mother struggles to just buy food until her courageous daughter decides, on her own, to disguise herself as a boy. At first, it is just so she can buy food and fetch water for the family but soon she discovers the remarkable freedom there is in moving about as a boy. She also finds she is not the only girl passing as a boy. During the day, she becomes the family breadwinner and explores the world in her new identity, in an empowering experience. During the evening at home, she spins a magical tale to entertain her little brother, in which a young man goes on a quest to save his whole mountain village. By telling this story through the eyes of the girl, we are moved and enlightened about the plight of women under restrictive regimes everywhere.