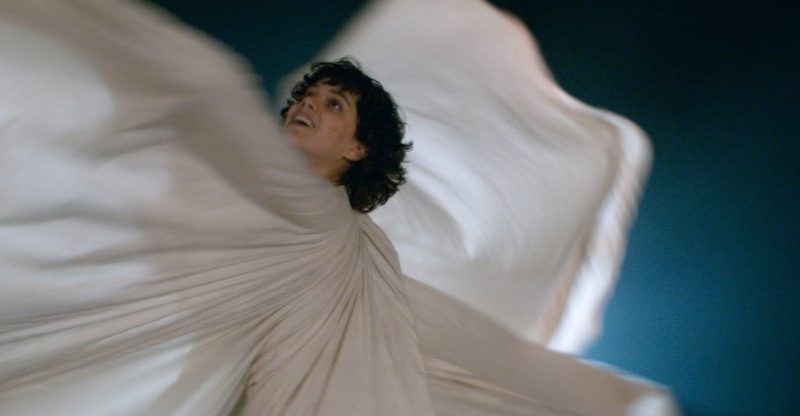 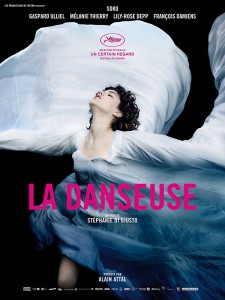 Stephanie DiGusto’s THE DANCER depicts the story of Loie Fuller, a dance innovator of the late 19th and very early 20th centuries whose Serpentine dance of billowing costumes and lighting effects, made her world famous. If you have seen clips of early silent films, there is a fair chance you have seen a snippet of her striking, butterfly like dance. Her dance style, a precursor to modern dance, influenced another famous dancer, Isabelle Duncan, played by Lilly-Rose Depp (the daughter of Johnny Depp), who once studied with her and whom Fuller mentored. Continue reading…

DiGusto’s film stars French singer Soko as the famous dancer, who achieved fame in Europe but was American born. The opening credits read “based on a true story” but the film takes great liberties with Loie’s history, including inventing a Wild West “origin tale” with a French gold miner father. In the film, her father’s death sends the then Marie Louise Fuller to New York City and to her temperance league mother. There young Marie Louise sets out to become an actress, but a malfunction with a costume on stage sparks an idea and a switch to dance. Adopting the stage name Loie Fuller, she creates a startling new dance. Like nothing seen before, the dance combines sinuous movements and yards of flowing silk, as Loie holds out sticks to extend her arms and performs under a dazzling array of lighting effects. Her work in the theater brings her in contact with a wealthy young but dissolute Frenchman, Count Louis Dorsay (Gaspard Ulliel). The count befriends her, after a fashion, and provides the means for her to escape to the more artistic-friendly Paris. Once in Paris, Loie finds her way into the Folies Bergere, forcing an audition on manager Marchand (François Damiens). But Loie has her eye on the Paris Opera, and starts training a group of young women dancers in her method, including Duncan.

Loie’s dance creations are physical performances, that are as much costume and stage effects as dance, but are undeniably fascinating to watch. THE DANCER is best, even magical, when it recreates Loie Fuller’s striking and hypnotic dances. It is a pretty film, with lavish period sets and costumes, and a big budget allowed for wonderful location shots, But the story is a fanciful version of Fuller’s rise to fame that is heavy on romantic style and a familiar, and sometimes muddled, rags-to-riches story-line.

Whatever its shortcomings, THE DANCER deserves credit for spotlighting Loie Fuller’s work for a new generation. The best parts of the film are the dance scenes and those wonderful images will stick with viewers after the credits roll.

EDITOR’S NOTE: THE DANCER is AWFJ’s Movie of the Week for December 1