Whistler Film Festival continues to stand out as an especially female friendly environment for filmmakers, with intensive programs for collegial networking, productive mentorships and the spirit-raising Women on Top Summit. And, AWFJ recognizes the superb women’s programming with presentation of EDA Awards for female-directed films.

AWFJ Has partnered with Whistler Film Festival for four consecutive years to honor female-directed film that are screening during the festival. Festival organizers nominate the films for EDA Award consideration. This year’s nominees included five films for the EDA Award for Best Female-Directed Film eight shorts for the Best Female-Directed Short.

The winners in both categories were announced at the Whistler Film Festival awards ceremony on December 3, 2017 by jury co chairs Katherine Brodsky and Jennifer Merin. 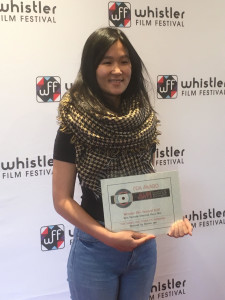 The winner of the EDA Award for Best Short is Sharren Lee’s The Things You Think I’m Thinking, about which the AWFJ jury commented: “At the film’s center is a person you don’t often get to see on the screen: Sean, a burn survivor and amputee who re-enters the world of dating. In a bar, he meets with Caleb, an able-bodied and appealing man who appears to take aromantic interest in him. And while, despite having no hands, Sean has managed to master getting around with great agility and some panache, his next roadblock is himself and being able to overcome his fears, insecurities, and trust issues — something that’s probably familiar to all of us. Ultimately, at the heart of the film are two people looking to make a human connection. And we found that we connect with them, too.” 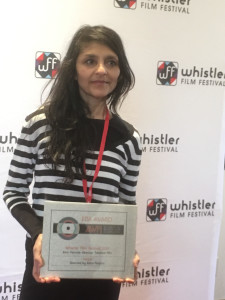 The AWFJ jurors also awarded a special jury EDA Award to Kyra Sedgwick for her directorial debut, Story of A Girl, a well balanced, beautifully crafted and timely take on a teenage girl dealing with modern-day bullying. The film is anchored by a wonderful lead performance from Ryann Shane and memorable turns from Kevin Bacon and Kyra’s daughter, Sosie. The award to Kyra has its especially rewarding serendipity because Kyra, as a young actress in her first lead Love and War,payed the granddaughter of EDA Reiss Merin, the activist actress for whom the EDA Awards are named. EDA is also the mother of AWFJ founder and president, Jennifer Merin. This was a wonderful opportunity to honor two marvelous women in film.