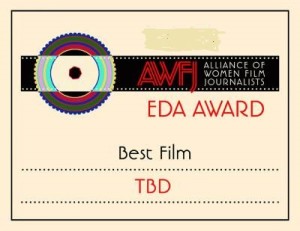 The Alliance of Women Film Journalists’ presents annual EDA Awards to recognize excellent work by and about women, in front of and behind the camera. 2017 marks the EDA Awards’ tenth anniversary. AWFJ presents three types of year-end awards. Standard “Best of” and “Female Focus” categories are presented annually, while “Special Mention” categories vary each year in response to the year’s crop of films, and usually include Actress Most In Need of a New Agent, Best Nudity and similar categories unique to the year end AWFJ EDA Awards. Continue reading...

The EDAs are named in honor of Eda Reiss Merin (1913-1996), a stage, film and television actress whose career spanned more than 60 years. A dedicated foot soldier in the industry, Eda was one of the founders of AFTRA and a long-standing Member of AMPAS.

In 2017, AWFJ will present EDA Awards in 25 categories divided into three sections, the BEST OF AWARDS, FEMALE FOCUS AWARDS and EDA SPECIAL MENTION AWARDS. Nominees in each category are determined by AWFJ members who submit nominating ballots. There are currently 77 voting AWFJ members. And the 2017 EDA Awards categories are:

EDA ‘BEST OF’ AWARDS
These awards are presented to women and/or men without gender consideration.