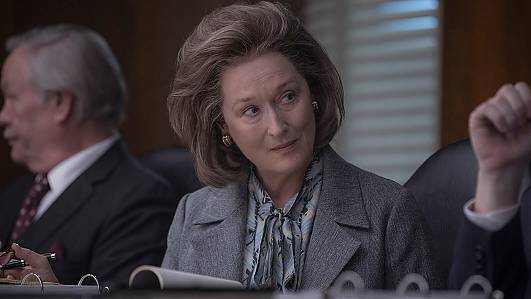 It’s hard to think of a movie with a more timely, important message than “The Post.” Steven Spielberg’s drama tells the story of the publication of the Pentagon Papers in the ’70s, but the film’s scenes of journalists passionately advocating for a free, independent press in a democracy could just as easily be set in today’s world of “fake news” conflict between the media and the government. Continue reading…. 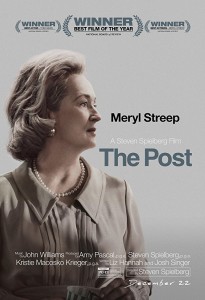 Plus, in a post-#MeToo environment, watching a strong, powerful woman like Kay Graham (Meryl Streep) take charge in a man’s world is both satisfying and empowering. Left to run the Washington Post after her husband’s suicide, Graham stepped up to the challenge of running the paper, eventually becoming a newspaper publishing legend. But her legacy didn’t come without challenges, one of the biggest of which was deciding whether to publish the leaked reports about the Vietnam War that became known as the Pentagon Papers.

Streep powerfully portrays Graham’s struggle. Surrounded by friends, colleagues, and advisers with a range of opinions on the issue — virtually all of them male — Graham is plagued by doubts and what-ifs but must ultimately do what she believes to be her duty as a member of the press. Tom Hanks gamely plays opposite her as storied newspaperman Ben Bradlee, and the two central stars are supported by a number of excellent actors, but this is really Streep’s movie.

The Post isn’t the first stirring, memorable movie about women in journalism (others include Truth, Spotlight, and Gloria: In Her Own Words), but it’s the one we need now, when it feels increasingly like both women and journalism are targets of the powers that be. Bravo to Streep, Hanks, Spielberg, and everyone involved in this film for standing up and saying that’s unacceptable. — Betsy Bozdech

Anne Brodie What could be more bracing than a real life political thriller starring powerhouses Meryl Streep and Tom Hanks? Steven Spielberg’s The Post revisits the Pentagon Papers scandal from the perspective of Washington Post owner Kay Graham and her executive editor Ben Bradlee. In 1971, they challenged the Nixon White House’s order not to publish the papers detailing US troop movements in Vietnam since WWII that proved Lyndon Johnson lied about US involvement. Daniel Ellsberg, played by Mathew Rhys, provided the Post with the papers and the subsequent Watergate break-in of the DNC is said to have been part of an effort to discredit Ellsberg. It smells eerily familiar as the President attempts to block publication of a book that denigrates him. Same off- kilter political climate and dirty tricks. Riveting stuff delivered by artists the top of their games.

Susan Wloszczyna Having worked for local newspapers in the late ‘70s, The Post had me at vacuum tubes, linotype, rumbling presses and a copy editor who instinctively crosses out the first five words or so of a reporter’s windy opening graph. Most will already know the outcome of how the top-secret Pentagon Papers saw the light of day. Yet John Williams’ pulsating score somehow makes the events onscreen feel like a race-to-the-finish thriller. Director Steven Spielberg’s best achievement, however, is to free Meryl Streep from having to perform with a row of exclamation points and simply be thoughtful and low-key as Washington Post publisher Katharine Graham as she delicately takes hold of the reins of power without ruffling too many white male middle-aged egos in the bargain – especially Tom Hanks as managing editor Ben Bradlee. She owns the last tense 20 minutes or so as Graham’s silky butter-hued party caftan transforms into the equivalent of Joan of Arc’s armor as she proceeds to make the biggest decision of her career.

Nikki Baughan: Meryl Streep and Tom Hanks lead a superb ensemble cast in Steven Spielberg’s handsome telling of The Washington Post’s groundbreaking decision to defy President Richard Nixon and publish papers which revealed the truth about the government’s orchestrating of the Vietnam war. A solid, typically awards season film is given some extra vim and vigour thanks to the relationship between Hanks’ ballsy editor Ben Bradlee and Streep’s more reserved publisher Kay Graham, who held the fate of her struggling family business in her hands. An elegant reminder of the importance – and power – of responsible truthtelling, The Post is a timely and rousing call to arms in an era where fake news poses a threat to us all.

MaryAnn Johanson *The Post* is such an important film about so vital a moment in the American experiment — when the White House and major newspapers battled over freedom of the press — that Katharine Graham’s own personal battle as the publisher of The Washington Post is only the second most momentous thing going on. Thankfully, her story does not take a backseat, and her struggle to assert herself, as a woman in an unprecedentedly powerful position, is just as riveting as the one over the First Amendment. What makes Graham here so wonderfully feminist is that she isn’t confident or assured in her position: she has to fight not only with the sexist attitudes of the men around her but also with herself to find her footing. That’s a feminist journey that we don’t often see onscreen: the one to overcome the cultural programming that tells women that we are not as capable as men and to start believe in ourselves. Read full review.

Dorothy Woodend: The star of Steven Spielberg’s The Post isn’t Meryl Streep or Tom Hanks, although, they’re perfectly serviceable. The real star is the enormous glistening caftan that Streep, as publisher Katharine Graham, wafts about in when the film’s penultimate moment arrives. The decision to bring down the Nixon government is undertaken in a tasseled white gold confection, that is little more than a souped-up nightgown. It is the peignoir that toppled a president. Read full review.

Sheila Roberts “The Post” is a powerful and timely story about the importance of journalism and why a free press must remain true to the highest standards of the profession to ensure a healthy democracy. In the summer of 1971, when the Nixon administration attempted but failed to block the Washington Post and the New York Times from publishing excerpts of the Pentagon Papers, courageous journalists exposed the truth behind the Vietnam war to an unsuspecting public. In an awards season filled with many talented filmmakers, this is old school filmmaking at its best by a director at the top of his game featuring strong performances by some of the finest actors in the business. Most riveting is Meryl Streep’s portrayal of Post owner Katharine Graham who held a traditional man’s job yet found a way to overcome the misogyny and inequality faced by women in that era which still continues to this day when women speak truth to power.

Nell Minow Meryl Streep gives a truly magnificent performance as Katherine Graham, a shy socialite who found herself in a job she didn’t expect and didn’t want. Streep conveys Graham’s growing confidence as her integrity, loyalty, and dedication to the paper and the country gave her the courage to risk her business and her reputation. Streep — like the woman she portrayed — is a national treasure.

Esther Iverem: The crucial test for the First Amendment depicted in “The Post” is revealing about the fragility of the so-called Fourth Estate in the United States. All at once, it interrogates the cozy relationship between corporate media and power. White male dominated newsrooms and boardrooms, and the public’s right to know.

Jennifer Merin As you know, THE POST is the truth-based story of Washing Post publisher Katharine Graham who stepped into her position of media influence at the age of 45, after having been the good wife to a forceful and wise man who’d made the decisions regarding their family business — the newspaper — and their social life. She is a woman who overcame her reticence, and stepped up to the challenge of restructuring the Washington Post corporate structure, and had the guts to hold to the highest principals of journalism and published the Pentagon Papers, thereby changing the course of US history — for the better. Katharine Graham is a women to be much admired, and superb role model for women of all ages. Her story is extremely important, and Meryl Streep does an admirable job of portraying her in THE POST.

Liz Whittemore The Post offers Meryl Streep the opportunity to portray yet another influential women in our history. In Katharine Graham, we are treated to a woman stepping out of her late husband’s shadow to shape how The Washington Post won over a national audience. The story is frighteningly relevant in respect to the attempts by the current administration to belittle actual journalism. Surrounded by a brilliant ensemble including Tom Hanks, Bob Odenkirk, Alison Brie, and Sarah Paulson (just to name a few), Spielberg’s direction shines thanks to the screenwriting of Elizabeth Hannah and Josh Singer.

Cate Marquis The First Amendment is not the only focus on this excellent, intelligent drama, which is one of the year’s best, but spotlights the challenges faced by publisher Katharine Graham, in the patriarchal 1970s, after she inherited the newspaper once owned by her father and then run by her late husband. Read full review.