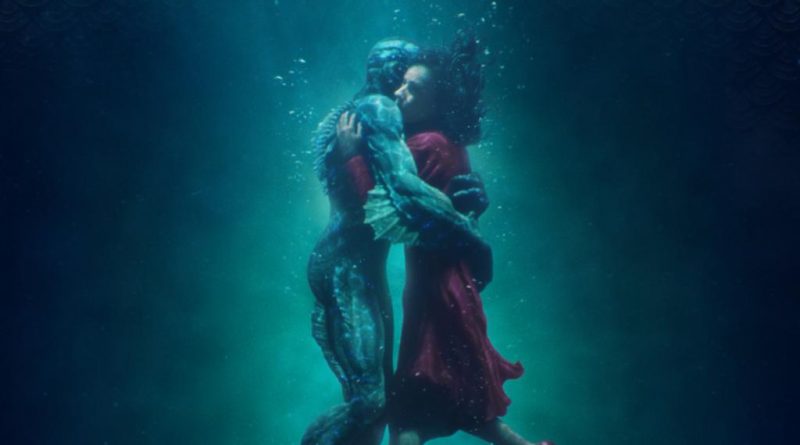 As beautiful to look at as it is entertaining to watch, Guillermo del Toro’s “The Shape of Water” is a rich, textured romance/fairy tale about two misfits who find unexpected kinship in a secret government lab during the Cold War. It’s unlike any other film that hit the big screen in 2017, which is one of the reasons why AWFJ members voted to give it the EDA Award for Best Film of the year.

The story centers on Elisa (Sally Hawkins), a mute woman who works on the cleaning staff at the aforementioned lab. She and her chatty colleague/friend, Zelda (Octavia Spencer), discover that a mysterious amphibious man (Doug Jones) has been brought to the lab for study by Dr. Robert Hoffstetler (Michael Stuhlbarg) under the supervision of militaristic facility director Richard Strickland (Michael Shannon), who’s eager to cut the mysterious creature open and find out whether what makes him tick can be weaponized.

But Elisa won’t allow that to happen. Her strong affinity both for the water and for others who don’t fit in — like her earnest artist neighbor, Giles (Richard Jenkins) — leads her to strike up a relationship with the amphibious man. Against all odds, she’s determined to free him from the lab and keep him safe.

Thanks to Hawkins’ brave, nuanced performance (her facial expressions say more than most dialogue), del Toro’s sure-handed direction, and the gorgeous production design, cinematography, and score, the film makes an impact you can’t ignore. Like most classic fairy tales, “The Shape of Water” has at least as much darkness and conflict as it does romance and light; it’s intense and emotional. And unforgettable. — Betsy Bozdech

Pam Grady: Sally Hawkins delivers 2017’s most evocative and moving performance as Elisa, a mute janitor who rescues the amphibious man (Doug Jones) she’s come to love from his fate as a lab rat in Guillermo Del Toro’s glorious valentine to cinema. Set in 1962, this Cold War fable—in which Michael Shannon plays a cruel government drone, Michael Stuhlbarg a big-hearted scientist with a secret, and Richard Jenkins and Octavia Spencer Elisa’s loyal friends—recalls the era with its sublime production design and costuming, film snippets of the era sprinkled throughout, and a spectacular homage to the musicals of Stanley Donen. This offbeat riff on The Creature from the Black Lagoon is a ravishingly romantic tale and a masterpiece.

Nikki Baughan: Fantastical and allegorical, Guillermo Del Toro’s The Shape Of Water is perhaps the most unconventional romance you’re likely to see, yet proves to be utterly beguiling. Sally Hawkins puts in an awards-worthy performance as charming, mute Elisa who, while cleaning at a top secret government facility during the 1960s, happens across an amphibious creature being held there for experimentation. Their bond is immediate, and what follows is both a touching love story and poignant, elegant treatise on the nature of tolerance and prejudice, and what it really means to be human. Featuring an exceptional cast – including Octavia Spencer as Elisa’s straight-talking friend, Michael Shannon as a shady government agent who proves that monsters may indeed walk the earth and the inimitable Doug Jones behind the aquatic makeup – and some truly glorious production design, The Shape Of Water plays like a traditional Hollywood romance with a decidedly modern sensibility.

MaryAnn Johanson Guillermo del Toro turns genre conventions upside down in this weird and wonderful love story, not only by making the “monster” an object of romantic desire but by creating a leading character unlike any we’re seen before. Sally Hawkins’s mute cleaning lady is a disabled heroine seen too rarely on the big screen, one for whom her disability is not the focus of the story, and one whose sexuality is not backburnered… as the film lets us know right from the beginning! The Shape of Water may be set more than half a century ago, but it’s a very modern fairy tale.

Jennifer Merin The Shape of Water illuminates the human value of misfits and monsters, and creates a wonderfully magical realm in which love prevails and dreams come true. Sally Hawkins and Doug Jones tap the divine in their performances, and Octavia Spencer supports with ministerial majesty. A(wo)men.

Liz Whittemore The Shape Of Water is the cinematic dream we’ve been missing and didn’t even know it. Guillermo del Toro’s mind has already given us movie magic with films like Pan’s Labyrinth, Crimson Peak, and Hell Boy, each with a distinctive style. The Shape Of Water is no less saturated in lush colors, costumes, and storytelling. This unique film will capture your imagination with engrossing performances from a top-notch ensemble cast and a romantic twist to the old-school monster movie. It’s truly breathtaking and the reasons are abundantly clear as to why we picked it as our Best Film of 2017.

Title: The Shape of Water