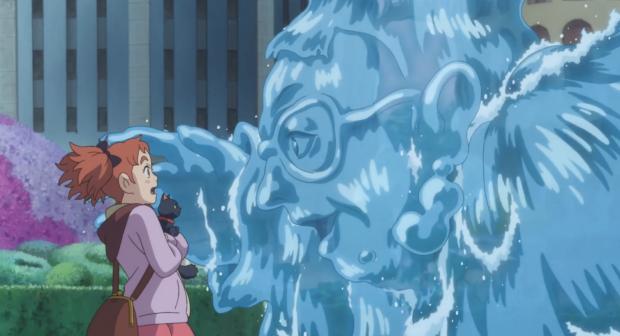 Take a lonely British child, add an unexpected discovery and a previously unknown world of magic — including a special school run by powerful wizards — and what do you have? Nope, not Harry Potter. It’s Mary and the Witch’s Flower, director Hiromasa Yonebayashi’s lovely anime take on prolific British author Mary Stewart’s 1971 children’s novel The Little Broomstick. 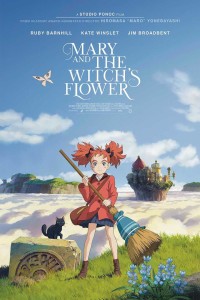 While many have noticed — and remarked on — the similarities between Stewart’s story and J.K. Rowling’s epic series about the boy who lived, Mary is its own unique, compelling tale. For starters, it’s all about a girl (a novel idea!), and one who’s refreshingly relatable at that. As voiced by Ruby Barnhill in the English-dubbed version, Mary seems like a very real kid: Bored and impatient despite the picturesque English countryside, she longs for something — anything — to happen.

And then it does. With the help of a cat that might be more than it seems, Mary finds a long-hidden broomstick in the forest. That, plus a mysterious, glowing blue flower, suddenly sends her on a wild flight that ends at Endor College, a school of magic run by Madam Mumblechook (Kate Winslet) and Doctor Dee (Jim Broadbent). While Madam and the Doctor at first welcome Mary with open arms and believe she’s a magical prodigy (thanks to the flower’s powers), Mary quickly finds out that all is not well at Endor. When her lone friend, Peter (Louis Ashbourne Serkis), is put in danger, Mary must decide just how much she’s willing to risk.

Gorgeously animated and briskly paced — except in the moments that are meant to evoke childhood ennui — Mary and the Witch’s Flower is a great pick for magic-loving movie fans of all ages. But it might have particular appeal for tween girls who love Harry and his Hogwarts adventures but secretly wish that Hermione was the one getting all the attention. — Betsy Bozdech

MaryAnn Johanson This is a terrific girl’s-own adventure (that boys can enjoy too, of course) that really centers female characters in a way that is far too rare onscreen. Not only do we have a wonderfully spunky female protagonist, but also a female villain and some intriguing supporting female characters. And the most significant supporting male character is a boy that the heroine has to rescue! We need more movies like this one.

Jeanne Wolf: Just ask animated Mary who learned that it ain’t easy in the real world to be a bitch or a red-headed witch. Her magical powers teach her that it isn’t wands or tricks that make the gal. It’s the right intentions, the right friends, and a sense of appreciation for the people who care for you. The film is sweet and a little scary. It will intrigue young ones who like some sci-fi and a lot of cute animals mixed with their magic.

Jennifer Merin Mary and The Witch’s Flower, based on Mary Stewart’s best-selling kids book, The Little Broomstick, is the story of young red-headed Mary Smith who discovers quite unexpectedly that she’s a witch and, after enrolling in Endor College for Witches, takes up the cause of magic for good vs. magic for evil. The narrative is a battle of charms and spells and spectacle. Produced by acclaimed Studio Ponoc and directed by Hiromasa Yonebayashi, this animated tale opens in theaters this month, but the narrative and the Mary Smith character leapt from Mary Stewart’s pen in 1991, six years before JK Rowling’s Harry Potter garnered millions of fans with its somewhat similar magical theme and environment. In this animation, it’s refreshing to see a girl take center screen, surrounded by magical effects that are conveyed through superbly artful animation. And, another plus: Mary rescues the boy!

Nell Minow: What an unexpected delight to find a fantasy film for children where courage and thinking through problems are more important than magic and being “the chosen one” and being yourself is better than being transformed.

Esther Iverem: Director Hiromasa Yonebayashi’s Mary and The Witch’s Flower is an ambitious and earnest anime-styled film full of cartoon magical realism. With touches of Harry Potter and The Magic School Bus it follows a young girl Mary on a wild adventure and on a journey for family and self-confidence.

Cate Marquis There is a kind of Harry Potter meets Alice in Wonderland meets The Wizard of Oz (with a dash of steampunk) feel to this delightful and energetic fantasy adventure tale. The film is directed by Hiromasa Yonebayashi and features the voices of Kate Winslet, Ruby Barnhill, and Jim Broadbent. The beautiful animation brings to mind Studio Ghibli, but it is the first release from Studio Ponoc, which was founded by several animators who had worked at Ghibli. Read the full review.

Anne Brodie: Mary and the Witch’s Flower based on Mary Stewart’s 1971 children’s book The Little Broomstick, combines cultures and design styles to tell a universal story. Mary lives with her beloved Great-Aunt Charlotte in an English country mansion, set in an idyllic natural world. Great-Aunt and her housekeeper Mrs. Banks do their best for Mary, giving her a loving environment and conversation and freedom to be outdoors and do what she pleases. But Mary has few friends besides Peter and two cats, and boredom sets in. Through a crazy series of supernatural events following the discovery of a magical flower, she lands in a school for witches. Her course of study includes broom riding which comes in handy when the school owners, revealed as corrupt and dangerous magicians, try to force her to surrender the powerfully magical flower to them for their own dastardly purposes. The universe of Japanese anime and the cultural ideal of English country life seem opposites but work well together here; the colour palette and energy of anime are less garish set against gentle chintz living rooms, flower gardens, and meadows and they in turn are energised. Little girls in every culture have Mary’s curiosity, resourcefulness and ability and that’s the lesson. The English voice cast includes Ruby Barnhill as Mary, Kate Winslet, Jim Broadbent and Ewen Bremner

Title: Mary and the Witch’s Flower

Screenwriter: Riko Sakaguchi, based on the novel, The Little Broomstick, by Mary Stewart