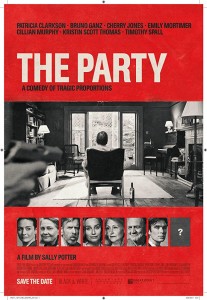 “I think it’s going to unfold like the Tea Party, only bigger. It’s not #MeToo. It’s not just sexual harassment. It’s an anti-patriarchy movement. Time’s up on 10,000 years of recorded history. This is coming. This is real.” –Steve Bannon in Michael Lewis, “Has Anyone Seen the President“?

“In the film industry, we are also connected to the rhetoric in the political world — Trump and so on. Things that were unthinkable to say 10 years ago are being said again.” –Sally Potter in Orlando Parfitt, “Berlin Q&A: Sally Potter, ‘The Party‘” Continue reading…

“You do look slightly Ministerial in that pinny, in a 21st-century, postmodern, post-post-feminist sort of way.” April (Patricia Clarkson) is watching Janet (Kristin Scott Thomas) as she prepares hors d’oeuvres in her well-appointed London kitchen. It’s the start of The Party, and as the two women wait for party guests to arrive and contemplate Janet’s new circumstance — namely, an appointment as Shadow Minister for Health — the longtime friends face questions about how they’ve got here, Jan still believing that “change is possible through the Parliamentary process” and April rather less idealistic. As she puts it, “I do expect the worst of everyone in the name of realism.”

As it turns out, such expectation is something of a motif in Sally Potter’s new film. In part this is because April is outspoken, even avid, regarding her hard-earned cynicism (“I’m proud of you,” she tells Jan, “even though I think democracy is finished”). But the repetition is also a function of how people connect and separate, how they need and deceive each other. This is the film’s focus: if the title most obviously refers the celebration of Jan’s new job, it also alludes to the affiliations people have, their loyalties and betrayals. While we never learn Jan’s political party membership, she and everyone around her have competing affiliations. As the story winds itself into a knot of dishonesties and revelations, part Who’s Afraid of Virginia Woolf? and part Waiting for Godot, partners turn on each other as they’re haunted by their pasts and afraid of their futures.

Chief among these defective partnerships is Jan’s with her husband Bill (Timothy Spall). Early moments of the movie have them in separate spaces: as she answers a series of phone calls in the kitchen, he drinks alone in the living room. She appears in elegant frames (Aleksei Rodionov has shot the film in gorgeous black and white), close and slightly angled, but he’s in low, wide angle shots, his eyes large and his face drawn, as he mimics the insincere words he overhears her saying (“Huge!” “Marvelous!”). As she greets their guests, he withdraws, focused on the jazz and blues records he keeps laying on the turntable.

Some of the ensuing disclosures are unsurprising: when Jan worries that Bill might be “depressed,” you know she’s not paying attention, a complaint he’ll articulate soon enough. And when April declares she’s splitting from her aromatherapist boyfriend Gottfried (Bruno Ganz) (“This is our last supper”), you know she’s about to learn a useful lesson from this fellow who seems so manifestly out of step with the academics and activists who show up at Jan’s, with his faith in karma cleansing and opportunities for “deep personal transformation.” That Gottfried also tries to make peace between Bill (who quotes love poems) and the only other man at the party, the self-righteous, coke-snorting banker Tom (Cillian Murphy), leads him into another sort of dimension, challenging some basic tenets of traditional masculinity (say, violence and possessiveness) by reminding his furious compatriots, “Everything is changing whether you want it or not.”

As anxious as the men are about women, the women are also anxious, and usually about women. Appealing as April’s wit may be, her capacity for meanness is daunting. At the same time, Jan’s serial self-corrections (“I don’t believe in revenge, I never have. I believe in truth and reconciliation”) sound admirable, but she’s continually unable to hold to any of the ideals she asserts. Still, she expects herself — as she expects others — to pursue these unfulfilled promises, like truth and democracy. Such pursuit demands taking sides, and moreover, perceiving sides. Party affiliations are fictions, of course, and committing to them is an act of self-performance. “I was working day and night for the party, our party,” exclaims Jan. It sounds awfully quaint.

Certainly, the movie insists, everyone performs, puts up a front, as a means to survive and advance. Sometimes, that performance is mediated by self-awareness and at least some sense of contexts. As April explains to women’s studies professor Martha (Cherry Jones), Janet is “pulling a Thatcher, proving she can still rustle up a canape in the kitchen when necessary, despite her political prowess.” But that historical comparison is terminally limited, as indicated by a few more allusions (to Dennis Thatcher’s role, for instance). If the relationships exposed in The Party are murky and unsettling, people hiding away in separate rooms or confronting one another as if on stages — politics of the type practiced by the Thatchers demands “certainty.” Or so observes April, who notes as well that this certainty must be fake, by definition.

In the midst of Brexit and Trump and Teresa May, Thatcher’s less helpful as a model for or against idealism or realism. Today, fictions exposed as such no longer give way to changes, no longer persuade that truth is preferred. As truths don’t hold, lies don’t matter. When Martha confesses to her pregnant girlfriend Jinny (Emily Mortimer) that the three sons she’s carrying frighten her — “They’re almost a football team” — where the partners end up is at once trite and fraught, not to mention unconvincing. But convincing isn’t much on this film’s mind. Instead, it lobs problems without solutions, in a series of quick, smart debates and perfectly composed conflicts, including meticulous uses of doorways and windows to remind you of who’s reflecting and framed by whom. Then again, when Tom smashes a window during one outburst, Gottfried assures him, “It’s just a broken window in a door and not a window into anyone’s soul.” Your best guesses at what each frame means are just that, guesses.

And this is what The Party does best, exposes your own efforts to interpret, to know, to be aware of what’s at stake. For as much as the characters on screen are fooled by their affiliations and disappointed by betrayals, they hang on to the very idea of parties and sides, generational or political, gendered or classed or sexed. They take sides with the hope of being saved, identified, and somehow committed. But your party can’t save you. It might consume you, though.