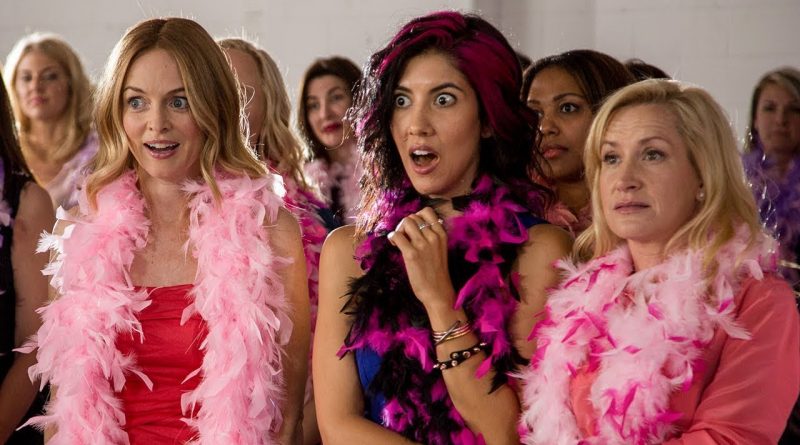 Heather Graham’s directorial debut, Half Magic, is completely femme-centric, but it won’t pass the Bechdel Test. Yes, the comedy focuses on three women who have viable careers and who talk to each other frequently — but almost all of their conversation is about men and sex. More specifically, about how to hook up with nicer men and have better sex. Continue reading… 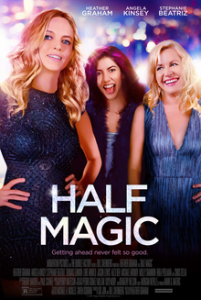 Graham, who wrote and directed, also stars in the film, playing Honey, a Hollywood screenwriter who wants to tell women’s stories and who’s determined to embrace and enjoy her sexuality. She and two new friends (Angela Kinsey and Stephanie Beatriz) form a support group, and they venture into the dating world to satisfy their desires.

The plot brings to mind ubiquitous “dumb blond” movie memes considered to be funny by some, exploitative by others. Just where Half Magic falls on the blond bimbo spectrum is a subject worthy of discussion. You can certainly argue that Graham lays a lot on the line in Half Magic, satirizing her own sexpot career and history in Hollywood, her strict religious upbringing and aspects of her personal life that have been gossip column fodder. And she takes on the taboos and conventions that stand in the way of women seeking to attain equality in everyday life and in the bedroom. It may well be that she’s exorcising demons by making fun of them, using her well-constructed cinema vehicle to drive them into the realm of silliness. But you could also take the view that Half Magic doesn’t tip the scales far enough in the direction of self-satire to escape some sense of exploitation.

Regardless, this is a film that warrants discussion. It’s a femme-helmed, femme-centric comedy that celebrates female friendship, pleasure, and empowerment, and that’s always something worth talking about. — Jennifer Merin

Anne Brodie: Heather Graham’s written, directed and stars in Half Magic, a tongue-in-cheek look at the confusing, demanding and challenging world of romance, sex and dating. Methinks there is a little of the autobiography here, with sly references to her character’s religious upbringing in the shape of Johnny Knoxville, a hellfire-and-brimstone preacher who’s shaming, conservative diatribes etched themselves on her, resulting in all kinds of issues, low self esteem, her negative views on sex and concepts about men. Honey wants to have an honest and respectful relationship with someone; it doesn’t help that she works in an exploitation film production house, run by her loutish boyfriend. She teams up with friends in similar situations (Stephanie Beatriz and Angela Kinsey) to vanquish what they see as their shortcomings; they go to a femininity workshop that promotes sexual self love, dabble in witchcraft and magical thinking. There’s a whiff of satire as the men in their lives say and do precisely the wrong things coming off as unenlightened, entitled narcissists. The film is in some ways is a powerful reaction to the men’s prehistoric thinking, the pre-#MeToo times with long simmering entitlement granted them by cultural and historic imbalance. The film’s a kick in the pants to the dinosaur, and it celebrates female friendship, the starting point for change.

Marilyn Ferdinand: Actor Heather Graham’s directorial debut is a rousing, motivational comedy that reinforces traditional roads to women’s happiness—hot sex and true love. Los Angeles’ sex-obsessed, self-actualizing culture gets a thorough drubbing, and its misogynist, entitled male characters are the absolute pits. If the film weren’t so generous and good-hearted about female friendship and gender solidarity (with one hissworthy exception), I couldn’t recommend it. But Graham as a would-be screenwriter, Stephanie Beatriz as a modern-day witch, and Angela Kinsey as a successful fashion designer create such unique, relatable characters and have such great chemistry together that their struggles to rise from being doormats to door openers make for a really fun ride. If that sounds appealing—and you believe in unicorns—this is the movie for you.

Betsy Bozdech Heather Graham’s directorial debut can be seen through different lenses. On the surface, it’s a bubbly friendship tale about three women who decide to take their romantic destinies into their own hands, proactively looking for better relationships — and better sex. But look at little deeper, and you’ll see that it’s also a commentary on women’s status in Hollywood and a condemnation of men who think all that women need to be happy is a good shtup. The story is clearly informed by Graham’s decades of showbiz experience, and you can’t help but wonder whether specific incidents and/or people inspired certain characters and scenes. We may never know, but we can appreciate Graham’s insider’s insight on the movie industry, feminism, and what women want.

Esther Iverem: With Heather Graham’s Half Magic, White American women continue to celebrate their freedom, sexuality and journey to self-love and fulfillment that blossomed during the hit TV series Sex and the City, in which Graham co-starred in several episodes. Spiritual belief in the female divine is both embraced and ridiculed as needed to for frequent comedic effect, as are all the other foibles of modern dating, earnest desires for romance and emotional acts of these women that enable the patriarchal order. Those of us in the intersectional wing of the #MeToo movement can find laughs and pieces of ourselves in Half Magic and maybe those laughs–as well as our common erasure–is all that we can expect from the genre.

Cate Marquis On the surface, the film has a lot of the usual rom com low-brow humor and character cuteness, but beneath that plot surface something snarkier is going on. Start with the character names – two women named Honey and Candy, and men named Peter Brock and Daniel Peters. It’s amazing the third guy isn’t named Dick. Graham keeps the focus woman-centric, even with the romantic fantasy surface, and the men are more types – although less the expected types. Half Magic is a little indie rom com that does not challenge genre limits yet works a little subversive magic around the edges. Read the full review.

Danielle Solzman: At its core, Half Magic is a female-empowered comedy that teaches women that they need to love themselves before they can love someone else. It’s a film that teaches women about the power of friendship and shows that women can do anything they want to in life. It’s such a great coincidence that Heather Graham’s film comes at a time when sexual harassment and abuse as depicted in the film are under attack from all sides in real life. Call it foresight or whatever, it’s great to see the sexism in the film industry being called out for what it is. Whatever were the underlying reasons that Graham chose to write these scenes about harassment into her script shouldn’t matter because the result is another reminder that these things shouldn’t happen (the harassment, not the film). Even though the film may be focusing primarily on the sexual side of things, Half Magic is the type of female-empowered comedy that needs to be made.

MaryAnn Johanson Heather Graham’s charming comedy is a delightful example of deploying silliness to make some serious points. This is lighthearted movie about profoundly problematic matters of men’s selfishness in romantic relationships and the outright misogyny of our culture, and it’s really frank about how women sometimes go right along with men in denying themselves the respect they deserve. But watching these three women learn how to be kinder to themselves and overcome their fear that they don’t rate men who treat them well is cheering, and cheerworthy. It’s Feminism 101, but that’s something that we haven’t seen much of onscreen.

Nikki Baughan: The message behind Heather Graham’s directorial debut is to be applauded, even if the delivery is somewhat clunky at times. While this tale of three newly-empowered women taking control of their love lives and careers may itself play into some old cliches – there’s plenty of footage of Graham’s wannbe screenwriter half-naked, for example, – and characters can behave in ways that service the story, rather than reality, it’s still worth a watch. It’s certainly interesting to see women tackle these subjects in such bare-faced detail on screen, but the film works best in its broader strokes, most notably as a scathing look at the woeful gender politics that still dominate the filmmaking scene.