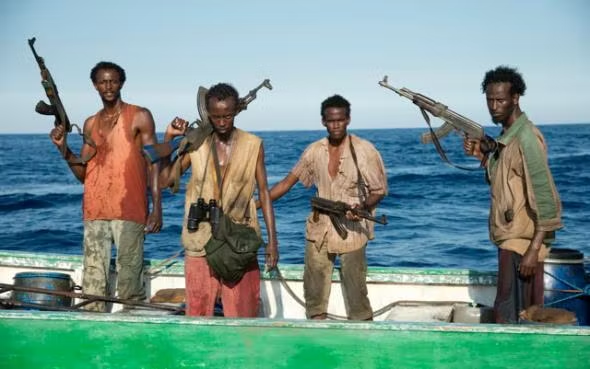 After newspaper headlines and Tom Hanks’ “Captain Phillips” stirred interest in piracy and hijackings of cargo ships on the Indian Ocean off the Horn of Africa, this dramedy delves into the culture of Somalia and its precarious democracy. Tired of receiving rejection letters from leading magazines, wannabe Canadian journalist Jay Bahadur (Evan Peters) relishes a chance encounter in Toronto with his idol, revered newspaperman Seymour Tobin (Al Pacino), who urges him to find a crazy, compelling story and pursue it. Continue reading…

Having once written a term paper on Somalia, Bahadur borrows money from his mother (Melanie Griffith) to travel there, hoping to meet with its newly-elected President in Puntland in order to understand the complex socio-economics of the region, once known as a “land of poets,” where people resolved their disputes with language.

At the airport, Bahadur is met by his translator Abdi (Barkhad Abdi, Oscar-nominated for “Captain Phillips”), who advises him not to follow up on CBS News’ offer of $1,000 to anyone who can get hostage footage from a ship that’s been captured by Somali pirates.

So Bahadur begins his research by scheduling interviews with various Somali bigwigs, all of whom expect to be bribed with the local drug called khat, a chewable narcotic plant which can be easily purchased in the open marketplace. Since Bahadur’s a stoner, he understands this all too well.

Which is the film’s weakness. As portrayed by Evan Peters (TV’s “American Horror Story”), Bahadur is an annoying wiseass and, therefore, not as likeable and sympathetic a protagonist as one might wish, even though he eventually becomes an acknowledged ‘authority’ on Somalia.

Based on Jay Bahadur’s non-fiction “The Pirates of Somalia: Inside Their Hidden World,” it’s written and directed as a first-feature-film by Bryan Buckley, who nabbed an Oscar nomination for his short “Asad,” featuring Somali refugees.

While Buckley’s effectiveness often gets sidetracked by simplistic subplots and superfluous characters, his casting is authentic, even listing each actor’s Somali refugee status in the end credits.

On the Granger Movie Gauge of 1 to 10, “The Pirates of Somalia” is a simplistic 6, enhanced by another superb performance by Barkhad Abdi.