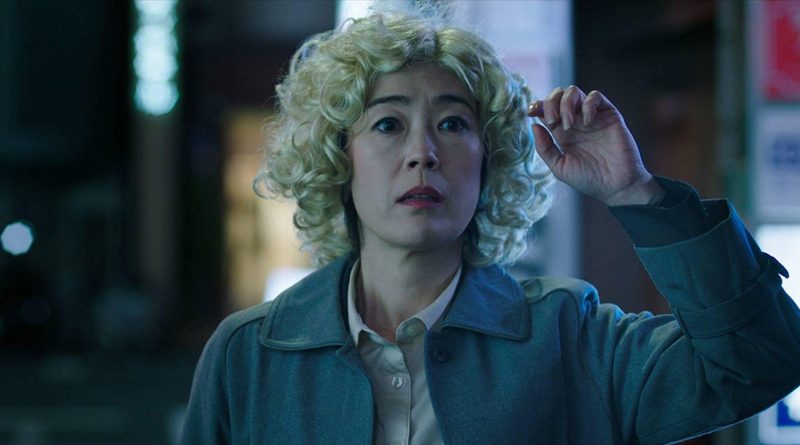 A poignant ode to the need for human connection, Atsuko Hirayanagi’s Oh Lucy! (based on her own 2014 short film) is a quirky dramedy about a Tokyo office worker named Setsuko (Shinobu Terajima). When her solitary life is disrupted by a rather unusual English class taught by hug-happy American John (Josh Hartnett) — who gives her a curly blonde wig and an American name, Lucy — Setsuko starts down a path she never would have anticipated. 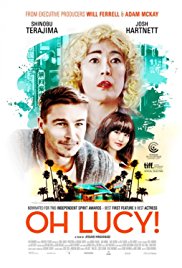 Hirayanagi’s script (co-written by Boris Frumin) doesn’t shy away from the sadness and loneliness in Setsuko’s life. In the opening scene, a young man pushes past her on a crowded subway platform, whispering “goodbye” before throwing himself in front of an oncoming train. Setsuko is aloof from her co-workers and their platitudes. Her home is a crowded hoarder’s nest of junk. And she’s even estranged from her sister, Ayako (Kaho Minami), who stole Setsuko’s boyfriend long ago … and married him.

Ayako’s spirited daughter, Mika (Shioli Kutsuna), is the only person Setsuko seems to care about, but even she becomes a source of disappointment, running off to California after persuading Setsuko to take her place in the English class and take over payment of the fees. Then, after Setsuko has become fixated on the gregarious hug-happy John, she discovers that he, too, has left Tokyo for California. Setsuko is bereft on two counts. She’s been betrayed by her niece, and the spark she felt during her lesson/hug session with John now seems like a cruel joke.

The movie takes Setsuko and Ayako on an improbable-but-entertaining journey to sunny LA, ostensibly to track down Mika. But the plot gets even more complicated when the sisters discover John in residence at Mika’s last known address. But Setsuko, having escaped from office bordom, clearly revels in the messiness, the humanity of it all. Terajima’s performance is impressive, blending stoic resignation with flashes of humor, mischief, and longing. Setsuko could easily have become just another face in the crowd, but she fights for her right to experience life fully, both highs and lows. And ultimately it’s that drive to connect with others, no matter how vulnerable that can leave you, that saves her. — Betsy Bozdech

Marilyn Ferdinand: Based on her award-winning short film, Atsuko Hirayanagi’s debut feature Oh Lucy! shows what a change in routine can do to a person. Main protagonist Setsuko Kawashima (Shinobu Terajima) is a 55-year-old office drudge whom we meet when a male commuter on a crowded train platform comes up behind her, says “good-bye,” and leaps into the path of an oncoming train. Chalk another line in the minus column for the lonely, angry woman who lives in a chaotic, junk-strewn apartment and has no one and nothing to hold onto but her resentments. All that changes when her niece (Shioli Kutsuna) connects her with John (Josh Hartnett), an American English teacher who gives her a new name (Lucy), a new hairdo (a blonde, curly wig), and a lot of big hugs. What hath John wrought! Japanese star Terajima finds the blackest of humor in her character’s headlong rush toward emotional and sexual fulfillment, wrecking havoc on all the hapless people in her orbit in the process. Oh Lucy! doesn’t fit together all that well, a common problem with short films expanded to feature length, but Terajima is riveting from first to last, the malaise in modern Japanese culture is entertainingly drawn, and I was delighted to see veteran A-lister Kôji Yakusho in a small role as another of John’s students.

Nikki Baughan: Japanese filmmaker Atsuko Hirayanagi explores the transformative power of human connection in Oh Lucy!, a film which seems to play like a standard culture clash comedy but reveals itself to run significantly deeper. In adapting her award-winning 2014 short, Hirayanagi further expands on its themes of identity and isolation which, although stretched too thinly by the feature length, still resonate in this age of decreasing human interaction. A nuanced central performance from prolific Japanese actress Shinobu Terajima is key, and also helps keep the narrative focused through its sometimes-haphazard tonal shifts. Read full review.

MaryAnn Johanson The loneliness of women is not a subject that is broached much onscreen, an oversight that Atsuko Hirayanagi’s bittersweet Oh Lucy! attacks with black humor, engaging oddity, and more than a bit of pointed uncomfortableness. Shinobu Terajima as Setsuko — aka “Lucy” — is awkward, desperate, a bit of a personal disaster… and a breath of fresh air.

Jennifer Merin Oh Lucy! is a charmingly quirky and emotionally engaging dramedy directed and cowritten by Japanese filmmaker Atsuko Hirayanagi. The plot revolves around a lonely and frustrated middle aged Tokyo office lady, Setsuko (Shinobu Terajima), whose daily life bounces back and forth between her unfriendly and sterile workplace and her junk-filled cell-like apartment. Her prospects expand when her niece (Shioli Kutsuna) convinces her to take English lessons and the American instructor, John (Josh Hartnett), gives her a new English-speaking identity with a blond wig and the name Lucy. As Lucy, she embarks on an unexpected and unpredictable adventure traversing the rough road of unrequited love, and bouncing from Tokyo to California and back. The frustrated Tokyo office lady ‘escape’ theme may bring to mind and call for a comparison with Kumiko The Treasure Hunter (our #MOTW for March 22, 2015. But Hirayanagi’s fantasy for lonely Setsuko spins in a very different direction than David Zellner’s equally fascinating Kumiko trip.

Kristen Page Kirby: For a movie that begins with a suicide, Oh Lucy! is surprisingly funny. Shinoby Terajima is quietly compelling as Setsuko (Lucy is the name she takes for an English class), a woman whose unassuming, routine life belies the chaos beneath. Her journey out of her routine life and into a more chaotic existence is more complicated than the usual “woman finds herself” narrative; here, her actions have very real, often negative consequences to those around her. It’s a rare film that allows a woman to make mistakes, yet writer-director Atsuko Hirayangi presents Lucy’s story without judgement or condescension. Lucy is a flawed character who does many flawed — and some malicious — things, but we still find ourselves rooting for her, because she is finally acting of her own volition, instead of living up to others’ expectations. Oh Lucy is not so much about what happens when a woman sets out to find herself, but what she learns when she gets lost.

Esther Iverem: One message from Oh Lucy could be that Japan is so emotionally restricted that a mere hug from a young White American man is enough to send a Japanese “old maid” into delusions of love and romance. But then again, this year, with a similar theme of the sex-starved attracted to strange in The Shape of Water, maybe director Atsuko Hirayanagi is doing something else: introducing a different kind of alien to shake up loneliness and isolation plaguing the “developed” world. Actress Shinobu Terajima is a master of her craft who carries the narrative from the first frame to the last.

Nell Minow:When people talk about a brave performance, this is what they mean. Shinobu Terajima is so completely in the moment that there is no sense she is aware of an audience. The desperation and loneliness her character experiences are raw, messy, and heartbreaking.

Cate Marquis Director Atsuko Hirayanagi makes a strong feature film debut with “Oh Lucy,” a Japanese dramedy with a darker, absurdist undercurrent. Hirayanagi’s film is a tale of a middle-aged single Japanese women gaining a new view of life after signing up for a course to learn English that requires her to don a curly blonde wig and adopt a new identity as “Lucy.” Hirayanagi focuses on a type of character often overlooked and offers her unexpected second chance in life. The director also peppers her film with little absurdities alternating with some moments of bracing darkness. Read full review