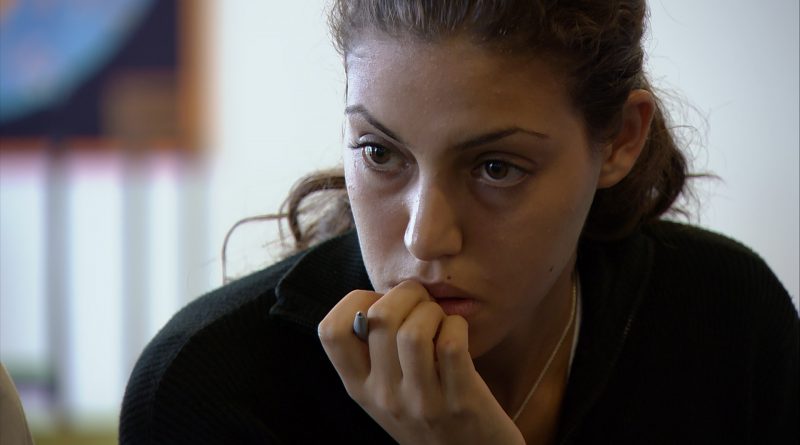 The conflict between the Palestinians and the Israelis is one of the intractable conflicts of the world. Even naming the country is fraught with emotion. If you say Israel, Palestinians object, and if you say Palestine, Israelis protest. Finding a path to peace is very rocky going. Director Hava Kohav Beller’s In The Land of Pomegranates examines that conflict in a human and evenhanded way, though the voices and experiences of people on both sides. The documentary’s title refers to Gaza, an area known for growing pomegranates. Pomegranates are considered a symbol of rebirth but “pomegranate” is also slang for a hand grenade. Continue reading…

The documentary alternates between Germany where young Israelis and Palestinians are taking part in a retreat aimed at promoting peace, and Israel where ordinary people on both sides share their experiences of the conflict. What is absent is any voice-over narration or experts speaking on the conflict. In this documentary, ordinary people give their thoughts, usually in calm, thoughtful manner. Although there are strong human feelings and differences of opinion here, this quietly effective documentary makes its points with the heated confrontations and shouting one usually sees in any film about this subject.

In The Land of Pomegranates is filled with beautiful photography and lovely landscapes, not something one expects in a documentary about this subject. Not to say that this documentary does not have scenes of the violence that has marked this conflict – it does – but it is the calmness, and its invitation to rational thought and discussion that is remarkable about this well-made documentary.

While the conflict between the Palestinians and the Israelis is intractable, two other long-running intractable conflicts, in South Africa and North Ireland, now have found peace, which gives some hope that peace is possible for this one as well. Buoyed by that hope, several groups have used techniques that worked in those earlier conflicts to try to help resolve this one. One of those programs is the one this documentary spotlights, “Vacation from War,” which brings young Israelis and Palestinians to Germany for a discussion/retreat to allow them to get to know each other far from the conflict and have a calm but honest exchange of ideas. It is one of the techniques used to resolve those other difficult and long-running conflicts. Likely, the filmmaker was inspired by that same hope in turning her focus one this annual event.

But the glimmers of hope come and go, as the voices in the documentary spotlight some stark differences in perceptions between the two sides. Sometimes, stubbornness keeps someone from conceding something to the other viewpoint. Sometimes rhetoric gets in the way.

Beller deserves credit for at least trying to have a human discussion with voices from both sides. She brings us close in during the discussions between the young people in Germany at “Vacation from War,” a program that requires them to live together and really get to know each other as well as participating in moderated discussion.

She takes the same intimate approach as she brings us an array of voices from people living in or near Gaza. Those voices include an Israeli mother who paid extra for a house in a “safe” area but now finds her family in range of missiles, a Palestinian woman who must make her way daily through a gauntlet of barriers and officials to get her young son’s medical treatment at an Israeli hospital, an Israeli man who survived a suicide bombing but was severely traumatized, and a Palestinian man imprisoned by the Israelis.

The people in this documentary are surprisingly thoughtful in their comments, but they are also frank. Sometimes, what is said is harsh. Towards the end of the documentary, the director starts to include more news footage, which tends to undermine the focus on individual voices and the even, measured tone with which it started.

Beller’s documentary is not without flaw but it gives us a chance to hear from ordinary people on both sides of this persistent problem. That human perspective makes In The Land of Pomegranates a documentary worth taking in, for its thoughtful approach to one of the world most heated conflicts.