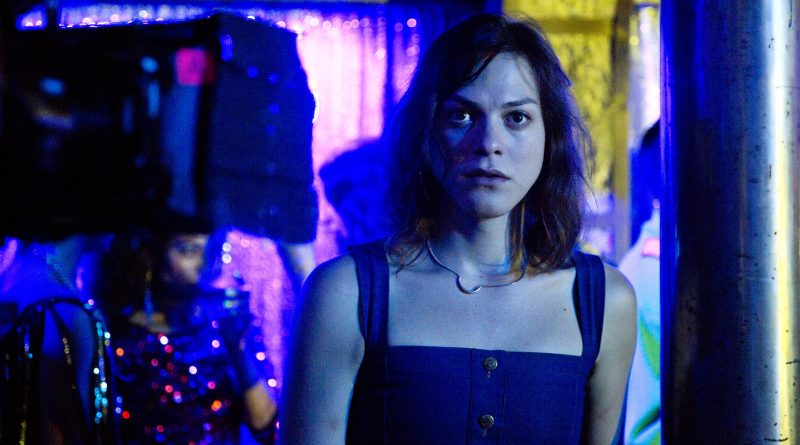 Filmmaker Sebastian Lelio examines the emotional stigma of transgender in this sensitive, Oscar-winning Chilean film. In Santiago, Martina Vidal (Daniela Vega) and Orlando Onetto (Francisco Reyes) are in love. She’s a young waitress/cabaret singer; he’s 20 years older, the owner of a printing company. After celebrating Martina’s birthday one evening, Orlando becomes ill, suffering a fatal aneurysm. Martina rushes him to the emergency room, but he dies on the operating table. Continue reading…

Instead of being able to mourn her loss, grieving Martina is suddenly viewed with distrust because of her sexual identity. To the hospital staff and police, she’s a suspicious person. To Orlando’s family, she’s perverted because she’s a trans woman.

A detective, Adriana Cortes (Amparo Noguera), subsequently visits Martina at the restaurant where she works, explaining that she’s from the Sexual Offenses Unit.

“Was he paying you?” she asks.

“We were a couple,” Martina answers truthfully, adding, “It was a healthy, consensual relationship between two adults.”

As bitter conflict erupts, she is forbidden to attend his funeral, and Orlando’ grown son (Niccolas Saavedra) confiscates their dog, threatening to evict her from the flat she shared with his father. At issue is the fact that Martina is still considered, legally, a man.

Charismatic Daniela Vega delivers an anguished, transcendent performance. Discovered by Sebastian Lelio (“Gloria”) as a LGBTQ “cultural consultant,” she convinced him that he needed a transgender actor.

“Her uniqueness pushed the script further,” Lelio clarifies. “I was trying to make the script to be as complex as she was.”

On the Granger Movie Gauge of 1 to 10, “A Fantastic Woman” is an empathetic, ethically compelling 8, tender and well-timed.

EDITORS NOTE: A Fantastic Woman was selected as AWFJ’s Movie of the Week, where you will find additional reviews. Additionally, Leslie Combemale profiled Daniela Vega in our February 2018 SPOTLIGHT, and Jessica Zack provided her fascinating interview with Daniela Vega and director Sebastien Lelo. A Fantastic Woman was also nominated for the 2017 AWFJ EDA Award for Best Foreign Language Film.