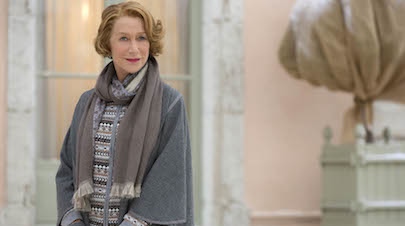 “I think it’s going to rain.” Anne (Toni Collette) turns to her husband Bob (Harvey Keitel), her blond hair perfectly styled, her eyes hidden behind giant designer sunglasses. “Why do you have to be so pessimistic?”, she asks. The couple is paused during their bicycle ride through Paris, a suggestion by her therapist to spend some “romantic” time together. “I am not pessimisteeque,” he smiles, “I’m realisteeque,” the faux French accent underlining just how much he dislikes living in a city where “everything is old.” Anne looks away, her straddling her sturdy rental bike: “They’re the same thing for you.” Continue reading…

In its first minute, Madame reveals the troubled marriage at its center. Wealthy and miserable, Anne and Bob may or may not be at a turning point: it’s hard to tell what’s at stake for either of them. They premise their identities on loose and feel-good fictions: Bob complains about his first wife, a Margaret Thatcher supporter who wanted him to vote for Reagan, Anne insists, “I’m a Democrat,” by way of asserting her generosity and open-mindedness. Each assumes the other is sleeping with someone else, they spend their time in bed discussing not having sex, and their upscale lifestyle — complete with a set of immigrant maids in black uniforms with hats and aprons — looks to be in danger. This last possibility takes on a bit of extra weight, as the beloved painting Bob hopes to sell in order to keep them afloat may or may not be the authentic Caravaggio he claims it to be. Indeed, this is the movie’s obvious thematic throughline, as it sets up a series of deceptions while also asking whether they matter, or rather, to whom they might matter.

To this end, Madame weaves together several layers of fictions. For one, Steven (Tom Hughes), Bob’s son from a previous marriage, is a successful novelist, at the moment awaiting a visit from his publisher even though he has “nothing to show him.” When Bob wonders whether this is a problem, Steven suggests not, as the publisher gets to write off a trip to Paris (and so considers Steven “one of his best assets”). Steven shows up in time for a fancy diner party, which Bob sees as a way to show off his painting and Anne intends it to be a showcase for her skills (“Dinners are my job,” she explains, “I can follow five conversations at the same time”), she’s unnerved by the suddenly uneven number (13) produced by Steven’s arrival without his suddenly estranged wife.

This crisis sets in motion yet another lie, as Anne insists on having one of the maids, Maria (Rossy de Palma) sit in as a pretend guest. As Anne’s team puts her in a dress and makeup, Madame (Anne) gives instructions on how to “play the part of the missing guest, silent and forgettable.” That’s is, “Don’t speak too much, don’t smile too much, and don’t eat too much.” Before you can say, “What could go wrong?”, it all goes wrong, at least in Anne’s eyes. Steven gets drunk and presumes Bob’s French teacher (Joséphine de La Baume) of sleeping with his father, just before he announces he means to marry her. The mayor of London (Brendan Patricks) brings his husband (Tim Fellingham), a gay stereotype who makes clear that he knows he’s a gay stereotype, confusing Anne’s single friend (Ginnie Watson), who believes she’s been invited to be matched with a British art broker, David (Michael Smiley).

As the camera cuts around the table to demonstrate that all these superficial conversations can be easily cut together, even though they seem to be about different topics, Maria’s performance soon enthralls everyone. By turns awkward and, in the self-important world Anne inhabits, horrifying. Between telling a vulgar joke and explaining to all assembled who Hugh Grant is. She lists his movies, imitates his dance in Love Actually, and — importantly — says out loud this unsubtle movie’s primary fiction: “People love happy endings… They can’t fight it: the hero runs, he kisses her in the rain, people love it.”

People love it and they expect it. Just so, as Madame rolls toward the end we anticipate, people make speeches to remind us of the parts they’re playing. Certainly, the film’s locations are lovely, including a swimming pool immaculately lit at night and a maybe-tryst at the gorgeous Palais Royal courtyard, where Anne stands atop one of the black and white columns to illustrate just how isolated she feels. Recognizing the fictions that undergird such beauty doesn’t make the beauty any less appealing or desirable. Of course, this isn’t news. And it may be that we “can’t fight it.” Still, we can think more carefully about how the formula works and what’s at stake for whom. It’s easy enough to make fun of rich people, white people, and smug Americans. If identifying the fictions is a first step, what might come next?