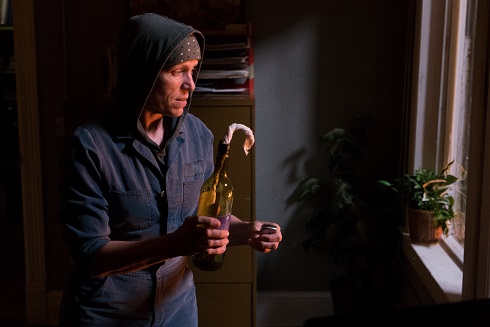 Writer/director Lynn Shelton and co-writer Jay Duplass craft an intriguing, moving drama about the emotional bond between a man just released on parole after 20 years and his former teacher who worked tirelessly for his release. Continue reading…

Carol (Edie Falco) never gave up on her former student Chris (Jay Duplass) who was unjustly convicted and kept working for his release. She stayed in contact with him even after his family stopped visiting, and over the years they grew close. Meanwhile, Carol’s husband and daughter resented the time and attention spent on Chris, feeling he robbed them of the attention they deserved. Chris (Jay Duplass)

Released on parole, Chris moves in with his younger brother Ted (Ben Schwartz) in the small town in rural Washington state where he grew up. Nonetheless, Chris only wants to see Carol, whom he came to regard as his lifeline during his years in prison,, the only person who cared about him. Now he only wants to be with her.

Surprised at the intensity of Chris’ romantic feelings and slightly embarrassed, Carol confides to a coworker that she thinks Chris has “a little crush” on her. She looks a bit guilty, which suggests she may have encouraged these romantic feelings thought her own loneliness in her loveless marriage. Now that Chris is out, Carol is nervous about how appropriate is a relationship with a former student and how that might effect her rocky relationship with her husband Tom (Charles Leggett) and with her increasingly distant teen-aged daughter Hildy (Kaitlyn Dever). Still, kind-hearted Carol is truly fond of Chris and wants to help him make the difficult adjustment to life outside.

This story could have easily slipped into the familiar “prison romance” scandal and titillation but director Shelton goes in more interesting and unexpected direction. Instead, she explores the challenges and experiences of someone trying to re-enter society after prison, as well as basic human feelings and needs, and how two good people might explore the ethical and practical boundaries to their intense emotional bond. Time and again, the director uses fraught situations to create a frisson of danger as they separately and together explore this new situation. Shelton handles all with finesse and a thoughtful, indirect touch, one that is sensitive, realistic, and warm.

Edie Falco is outstanding in this film, creating a memorable character of remarkable warmth and solid values. She also paints a heart-breaking portrait of a woman coping with her failing marriage and unsure how to re-connect with her teen-aged daughter. Also strong is Kaitlyn Dever as daughter Hildy, resentful of her mother for the time devoted to Chris yet also finding her own connection with him. Jay Duplass gives a fine and restrained performance as Chris. Sentenced to prison as he was moving from adolescence to adulthood, he is now a 40-year-old man in a kind of limbo between the two, and struggling to adjust to a world of smart phones and greatly changed culture, to find the best path to his new life. As Chris finds his footing, so do Carol and Hildy.

OUTSIDE IN is an awkward title but this fine drama is anything but clumsy. Shelton’s well-crafted film is filled with thoughtful reflection and good people trying to find their life balance and be true to themselves.