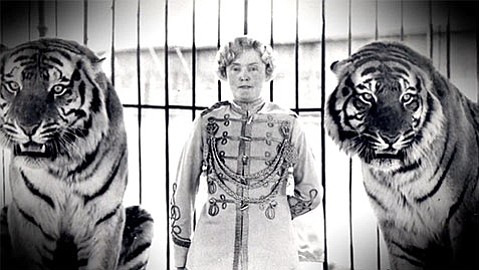 Mabel Mabel Tiger Trainer tells the surprising, forgotten story of the first woman tiger trainer, Mabel Stark. Born into poverty in Tennessee and growing up the daughter of a sharecropper in Kentucky, Mabel lost her father as a child and later her mother before she essentially ran away with the circus. Mabel fell in love with tigers when she first saw one in California, and against strong opposition and the prevailing belief that women could not handle big cats under the big top, she did just that. Not only did she succeed in learning how to train tigers by the “kindness method,” Mabel and her tigers eventually became the star act with Ringling Brothers. Continue reading…

Director Leslie Zemeckis tells a fascinating, entertaining tale, not just of this remarkable woman and her once-storied career, but of circuses and big cat animal acts. A pretty petite woman with curly blonde hair, Mabel was as fierce as a tiger herself, overcoming barriers to women and her own broken childhood. She was mauled many times and covered in scars but always got back in the ring with her beloved tigers, as many as 21 at a time.

The film features interviews with people who knew Mabel, fellow female animal trainers, and excerpts from Mabel’s own biography, read by Melissa Leo. The picture that emerges is of a fearless woman who never stopped striving and who loved working with her big cats more than anything.

Although the documentary’s non-linear approach sometimes makes it hard to sort out Mabel’s many husbands and details of her personal life, Mabel Mabel Tiger Trainer does give us a lot of fascinating information about circuses and big cat training, from the animal trainers and circus people themselves. The documentary puts circus in context of the changes of her lifetime, from the 1890s to the 1960s, and how the rise of other popular entertainments like movies impacted the popularity of circuses. We also learn intriguing facts about training big cats, and why tigers might be a safer choice than lions.

Mabel Mabel Tiger Trainer packs in a lot of amazing, little-known facts, about circuses, big cat training and the barriers women faced in the early 20th century, while introducing us to the once famous and still impressive Mabel Stark, tiger trainer.