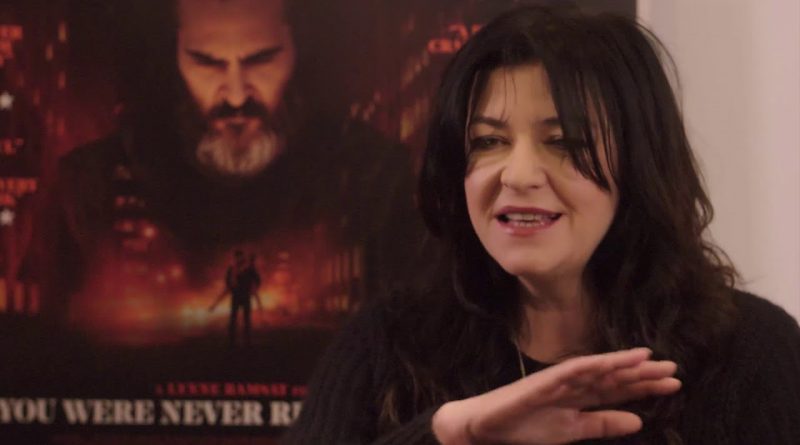 Writer/director Lynne Ramsay is yet another confirmation that Scotland is one of the coolest places on the planet for cultivating artists. Ramsay has created a multi-hyphenate career as writer, director, producer, and cinematographer. A number of distinguished film world insiders have called her one of the greatest living filmmakers. As evidenced by her career and loyal fans, it appears that she stands squarely in the middle of those Scots who don’t suffer fools, and for better or worse, dance to their own drums. Continue reading…

Glasgow has brought the world a long list of visual and performing artists, many of whom — like actor Billy Connolly, architect Charles Mackintosh, artist Susan Philipsz, and writer Denise Mina — are known for their strong-willed and freethinking perspectives. Born in that city in 1969, Lynne Ramsay expressed herself through writing and painting, and became so fascinated by photography that she studied it at Napier College in Edinburgh. She continued by expanding her interests and honing her skills at the National Film and Television School in Beaconsfield, England, where she specialized in cinematography. Her experiences in school instilled in her the aesthetic of telling a story less through exposition, and more through the use of bold images accompanied and underscored by the integration of artistic sound design. Always passionate about writing her own material, Ramsay has written or adapted nearly all of the screenplays for her shorts and feature films.

Ramsay’s graduation short, Small Deaths, won the Prix du Jury at the 1996 Cannes Film Festival. The film, intriguingly structured as three vignettes in the life of a young girl, was filmed with non-professional actors who delivered stunning performances under Ramsay’s direction. Small Deaths was a portent of things to come.

Ramsay has repeated her debut feat, not only at Cannes two years later with her short Gasman, but with each of her subsequent projects, all of which have been lauded in festivals around the world. Small Deaths also signaled Ramsay’s ongoing interest in intense subject matter that examines the perspectives of children, often damaged by circumstances and dealing with guilt, grief, and trauma. She studiously avoids cliches and embraces character studies that always reveal something new and unanticipated about the human condition. Ramsay’s debut feature Ratcatcher (1999) was an exploration of Glaswegian working class circumstances during the 1970s, and once again focused on the story of a child in crisis. James, at age 12, deals with overwhelming guilt over accidentally causing a friend’s death. Ratcatcher was relentlessly bleak, but lyrical. In the film, moments of beauty in the midst of despair define Ramsay’s vision to be singularly stylized and gritty, with a growing auteur-like presentation of story. Winning an avalanche of awards — including the Carl Foreman Award for Most Promising Newcomer at the BAFTAs, the Douglas Hickox Award at the British Independent Film Awards, and a nomination for the Un Certain Regard Award at Cannes — the film confirmed Ramsay as an outstanding talent.

Morvern Callar (2002) was Ramsay’s first adaptation from another source. It is a film that fully reveals Ramsay’s skill as visual narrator able to capture and express emotion though images as simple as that of an old woman pointing to snow outside her window. It is not, as is the case with all of Ramsay’s filmography, a movie that Hollywood would expect a female filmmaker to make. Witness the scene where Morvern cuts up and disposes of her dead lover’s body.

With Movern Callar, Ramsay demonstrated that her skills as an artistic storyteller could be applied to Alan Warner’s cult novel with equal impact and success as with material she originated. The film is also a sterling example of the importance of music and sound design as essential elements in Ramsay’s cinematic art. And, again, her work with actors brought Samantha Morton, starring as the anti-heroic young woman who attempts to create a new life out of her boyfriend’s sudden suicide, accolades from Cannes, rave reviews and the British Independent Film Award for Best Actress.

Continuing her explorations into nihilism and emotional deterioration, Ramsay went on to adapt, direct, and produce the critical sensation We Need to Talk about Kevin (2011). Based on the novel by Lionel Shriver, the film is about the experience of a mother, Eva dealing with the aftermath of a school shooting perpetrated by her son. The film brought kudos to the luminous and ever-compelling Tilda Swinton as Eva, and brought greater fame for breakout star Ezra Miller, who played Kevin. We Need to Talk about Kevin was named one of the best films of the year by a number of critics, following was was a rocky road during development and on its path to release.

The announcement in 2001 that Ramsay would be adapting and directing Alice Sebold’s heartbreaking bestseller The Lovely Bones, which once again examined a young life, death, grief, and guilt, was exciting news for the filmmaker’s growing number of dedicated fans. Ramsay had read the unfinished manuscript, and immediately committed to work on it. Unfortunately, creative differences ensued, and she parted ways with the project, with the finished film becoming a poorly-received release for director Peter Jackson. This was not the last time creative differences led to speed bumps in Ramsey’s otherwise soaring career.

In 2013, she left the helm of Jane Got a Gun, just as filming was to get underway. When speaking about possible repercussions resulting from her walking away from the film, Ramsay said she’d heard someone ask if she’d been ‘on her period.’ She’s indicated that from her perspective, she felt the producers getting farther and farther away from her vision, and reported that she’d been being asked for covering shots, with the intent, she feared, they would do re-edits. There were rumors circulated that Ramsay is difficult to work with, yet throughout her career and in all of her completed projects, she has made lasting friendships with both cast and crew.

The fallout from the Jane Got a Gun debacle led to Ramsay going to Santorini in Greece to recover and regroup, and move forward, both personally and professionally. It was in Santorini that she began writing the adaptation of You Were Never Really Here. The message, if there is one to be delivered via Ramsay’s travails, is not to underestimate a Glaswegian artist. Trifle with them at your peril, as they know their own integrity, and will stand by it. It took six years from the success of We Need to Talk about Kevin to the release of Ramsay’s new film, You Were Never Really Here, which opens theatrically in the US on April 6, 2018. The film, based on a novella by writer and raconteur Jonathan Ames, is about Joe, a veteran with PTSD, who tracks down and rescues sex trafficked girls. When violence is necessary, as it often is, he uses a ball peen hammer. He lives his days struggling with depression, constant flashbacks, and suicidal ideation. His only moments of joy involve caring for his dementia-suffering mother.

During the process of writing You Were Never Really Here and and preparing for filming, Ramsay imagined and held firm to her ideal casting of Joaquin Phoenix as Joe. Her instincts were right, and the two proved to be a professional match made in cinema heaven. They have much in common. Both director and actor avoid social media, preferring to let their work speak for them. They also appreciate the balance of visuals, music, and character that make up the language of cinema, and see all aspects of filmmaking as collaborative. Pre-release, the film has garnered considerable awards buzz. Although an unfinished version of the film was shown at its Cannes premiere, it was given a seven minute standing ovation and Ramsay won Best Screenplay, with Phoenix winning Best Actor. In You Were Never Really Here, Ramsay’s use of sound design and startling visuals continues, both with ever more dramatic effect. In fact, she has said with her next movie, she’d like to start her filmmaking process by creating the sound and music first, and then filming. There is no question that Ramsay’s no-nonsense, straightforward style and her commitment to maintain her aesthetic and artistic vision would be met differently were she a man. What has to happen now, given the changes taking place in Hollywood, is that she be embraced for the master filmmaker she is, without regard to her gender. With each new project, she proves she is one of the best filmmakers working in the world today. She is interested in doing more studio films, including a superhero movie, but hasn’t gotten those offers.

She has said she could do anything. Movie lovers and cinematic history will be the better for her being able to prove it, in every way and as often as she wants. — Leslie Combemale