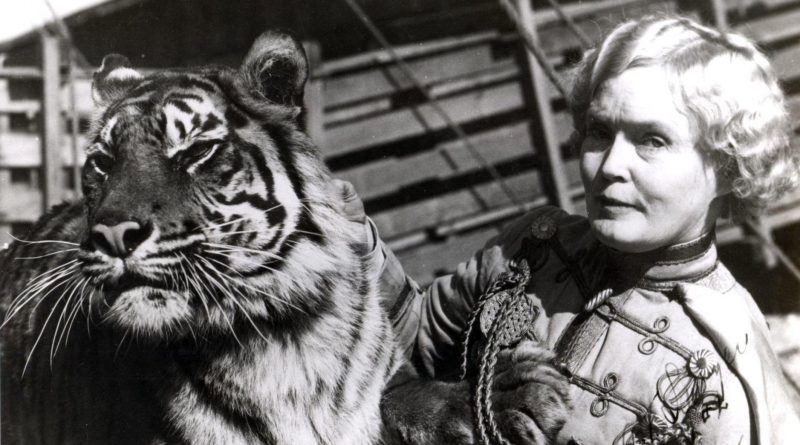 More than just the story of the remarkable Mabel Stark and her eventful life, Leslie Zemeckis’ documentary Mabel, Mabel, Tiger Trainer is a fascinating glimpse into a world most of us will never experience, one of dangerous animals, fearless performers, and the nonstop behind-the-scenes drama of the big tent. It is also a chronicle of life of a gifted, determined and tougher than tigers woman performance artist in America from the turn of the nineteenth century to 1968. Continue reading… Mabel Stark’s personal story is what ultimately holds the documentary together — and what a story it is. Escaping an early life of poverty and abuse by joining the circus as a dancer in the early 1900s, she discovered that her true passion was working with animals; specifically, the big cats. Mabel married strategically to further her career, and by 1916, she was training and performing in the ring with tigers — the first woman to do so. From then until her death in 1968, Mabel never wavered from her love for her work and dedication to her animals; even when they turned on her (she was severely mauled more than once), she was devoted to them.

She was a famous and acclaimed performer, but Mabel’s life was far from one of glitz and glamor. Rivalries and jealousies complicated her career, especially later in life. And her dedication to her animals meant that her personal relationships (many of which had other complicating factors as well) always took a backseat to her passion. That’s something she has in common with many of the other veteran female animal trainers whom Zemeckis interviewed for the film, including Patricia White and Trudy Strong. They all describe extremely close bonds with the animals they’ve spent so much time with; their passion is every bit as clear and strong as Mabel’s.

And the obstacles they’ve faced are every bit as challenging. By chronicling the history of the circus in the 20th century, Mabel, Mabel, Tiger Trainer documents yet another arena in which women have had to fight tooth and nail for every accolade and advancement they’ve achieved. Zemeckis helps Mabel’s friends and colleagues tell her story — as well as their own — with confidence and insight. And lots of big cats. — Betsy Bozdech

Marilyn Ferdinand: “Tiger Tiger, burning bright/In the forests of the night/What immortal hand or eye/Could frame thy fearful symmetry?” The obvious allusion director/screenwriter Leslie Zemeckis makes to William Blake’s poem with the title of her third documentary about forgotten figures in entertainment history suggests what a fiercely independent woman we are about to meet. Mabel Stark was a poor, abused girl who broke through every barrier and defied every social convention to become the first female tiger trainer. The film documents the more than 50 years Stark spent thrilling circus audiences with her dangerous labor of love, but also ranges more widely to talk with other women and men who find the immediacy of working with big cats worth any price. Zemeckis doesn’t completely crack the code on what drew Stark so strongly to tigers, but it’s likely that Mabel recognized kindred spirits in these beautiful, powerful creatures that no one has ever really tamed.

Nell Minow: Mabel’s life outside the tiger cage took far more courage and survival skills than her life inside it. What makes this skillful documentary so touching is not that Mabel found a career in taming tigers; it is that she found a home there.

Pam Grady: Life was purr-fect for Mabel Stark (1889-1968) – so long as she could be with her beloved tigers. Leslie Zemeckis’ documentary pays homage to an amazing woman and those who followed the trail she blazed with this fascinating portrait of circus life and the truly death-defying work of big cat trainers. With plenty of archival footage, the reminiscences of other trainers, and Stark’s own oral record, the film vividly portrays Stark’s adventurous times and a circus world that is rapidly vanishing into the mists of history.

Nikki Baughan: After profiling the worlds of the burlesque (Behind The Burly Q) and the freakshow (Bound By Flesh), Leslie Zemeckis now turns her sharp documentarian’s eye to another incredible real-life story; that of Mabel Stark who, in the early 1900s, escaped her poverty-stricken childhood by becoming one of the USA’s most acclaimed circus tiger trainers. Archive footage, talking head interviews from family and experts and passages from Mabel’s biography read by Melisa Leo speak to her unrelenting confidence, not only in facing the deadly beasts in the ring but also in rising to the top of a field dominated by men. While the idea of caging and training these majestic wild animals for entertainment may now be somewhat outdated, the film is both a fascinating slice of history and a colourful tribute to a truly powerful and inspirational woman.

MaryAnn Johanson A portrait of an extraordinary woman that surely very few of us have ever heard of. Mabel Stark’s story is that of all women pioneers: overcoming the resistance of men who insist a woman couldn’t possibly do the work, and often innovating in ways that men couldn’t manage or wouldn’t even conceive of. The retro footage does show, at least, that she did receive some recognition within her lifetime, so at least she knew she and her work were appreciated!

Anne Brodie: Mabel, Mabel Tiger Trainer takes us deep inside the much maligned but fascinating world of the circus at the turn of the last century. Mabel Stark, a woman of considerable confidence willing to break boundaries wherever she found them, falls for a tiger. She was already circus – a hoochie coochie dancer – but her passion for tigers and lions was unstoppable. She became a lion tamer, unthinkable for a woman back then, and she was good. One of her husbands told her that the only way to train a tiger was through kindness, being “quiet, gentle and decent” and she followed his advice for the rest of her life; even so she was mauled, de-skinned, de-fleshed and nearly de-limbed. But Mabel carried on because being with her cats what was she loved most, her raison d’etre, her true companions. Difficult childhood experiences appear to have taught her that cat company was better than human. So she risked everything, night after night to have it. Leslie Zemeckis’ striking doc details Mabel’s deep connection with the mighty beasts, and delivers a rare portrait of travelling circus companies, the rough and tumble life the sense of community and dignity of doing an unconventional job to the best of one’s ability. Fittingly, Melissa Leo narrates.

Esther Iverem: The skill and creativity involved in assembling the documentary “Mabel, Mabel, Tiger Trainer” is impressive. Yet when a movie spans both the horrific era of Jim Crow and the racism of the American circus but references neither, an important part of the narrative is missing for me. This story of the female tiger trainer Mabel Stark is amazing but I am left wanting to know more.

Jennifer Merin Mabel Mabel Tiger Trainer is filmmaker Leslie Zemeckis’ delightful, astonishing and inspiring documentary about Mabel Stark, the world’s first woman tiger trainer. Born in 1889 into squalor, Stark turned her life around by learning to train tigers. By the 1920s, she was a famous featured performer with the circus, travelling throughout the U.S. with her beloved troupe of tigers in tow. Using captivating archival footage, Zemeckis covers Mabel’s several marriages and many maulings. Melissa Leo narrates and there are superb on camera interviews with other tiger trainers — including several women who followed Mabel into her daring and dangerous profession — who pay tribute to their fearless heroine. Fun factoid: Mae West was a big fan! Never knew about Mabel? Meeting her in this enthralling documentary is a real joy!

Sandie Angulo Chen: Filmmaker Leslie Zemeckis once again delves into the history of pioneering women (her last film was about the history of burlesque) by chronicling the story of Mabel Stark, the first woman tiger trainer. Mabel’s astonishing life reminds me of Laurel Thatcher Ulrich’s famous quote “well-behaved women seldom make history,” as Mabel wasn’t exactly a typically likable woman (the tigers, even more than her many husbands, seemed to be the true loves of her life), but her ambition and pride are worthy of respect. Being a big-cat trainer is difficult and dangeorus — as several of Mabel’s successors in the circus industry explain — but being a woman tiger trainer was unheard of before Mabel. A fascinating tribute to a remarkable, history-making woman.

Cate Marquis Mabel Mabel Tiger Trainer packs in a lot of amazing, little-known facts, about circuses, big cat training and the barriers women faced in the early 20th century, while introducing us to the once famous and still impressive Mabel Stark, tiger trainer. Read full review.