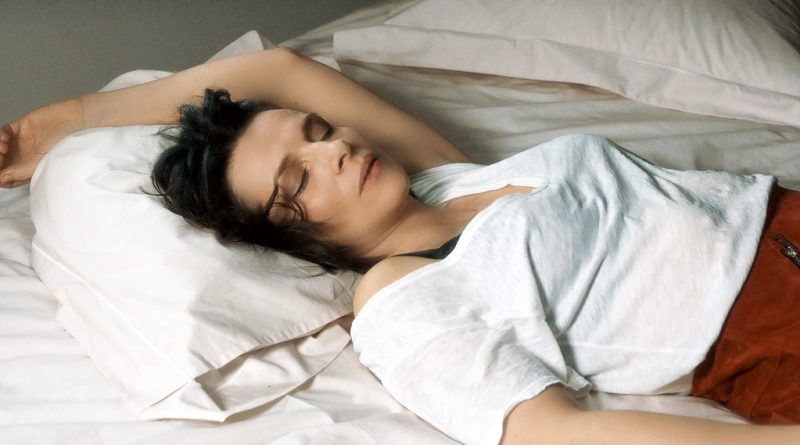 Claire Denis’ romantic dramedy Let the Sunshine In stars Juliette Binoche as Isabelle, a smart, sophisticated Parisian artist and divorcee who’s only missing one thing in her life: true love. She meets plenty of men who want to sleep with her, but there’s something off about all of them; some are married, some are too full of themselves to be able to properly nurture a partner, some are exes who should clearly stay that way. 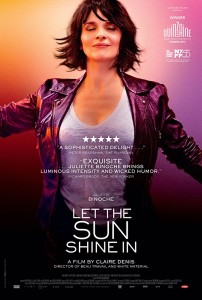 But she never stops looking, because she can’t conceive of a life without romantic love. Which isn’t exactly the most empowering attitude, but it’s definitely relatable; Isabelle’s relationship misadventures will strike a chord with plenty of women (and probably a fair share of men, too!). And the fact that, even when she doubts herself (which is often), Isabelle isn’t willing to settle sends a valuable message: She’d rather keep looking for perfection than accept someone who isn’t worthy of her.

Set amid the haute Parisian art scene, Let the Sunshine In boasts debonair characters in tres fashionable outfits, soapy confrontations, and lovely cityscape settings. And Binoche delivers a compelling, intimate performance; Isabelle is in nearly every frame of the film, and you never get tired of her — even if sometimes you might want to talk a little sense into her. Binoche and Denis collaborate in creating a character whose feminine energy and perspective anchor the film, whether Isabelle is interacting with selfish lovers or sympathetic friends and colleagues.

It all builds up to an unexpected but charming ending that introduces a major new man in Isabelle’s life — but whether he will help or hurt her search for love remains unclear. But you get the feeling that she’s destined for happiness either way, whether on her own or with the true love she longs for. — Betsy Bozdech

MaryAnn Johanson If there’s one thing cinema remains sorely lacking in, it’s portraits of women who are deeply flawed, self-defeating, contradictory, hypocritical, just an all-around mess. (We are all full up on such portraits of men.) Let the Sunshine In is, then, an absolute essential installment in this very tiny genre of movies about women. That Juliette Binoche’s lovelorn artist is also in her 50s only doubles the necessity of this film: seeing women of her age depicted as vital, sexy, lusty, and full of life is rarer still. She even dates much younger men, with no one at all noting the age difference, just like male protagonists get to do onscreen. It’s a pity she doesn’t seem to have the same kind of luck men onscreen often have romantically, but that just plants this movie firmly in the realm of reality, not fantasy. Read full review.

Nikki Baughan: Juliette Binoche glows at the centre of Let The Sun Shine In, an endearing – if somewhat meandering – treatise on mid-life love from director Claire Denis. As Isabelle, a divorced Parisian artist seeking genuine connection from several men of her own age- most emotionally unavailable – she is by turns strong and vulnerable, furious and romantic. While the film lacks the narrative clarity of Denis’ other works, Binoche is luminescent as an established, successful woman who knows her own worth and absolutely refuses to settle, and the message, that true happiness comes from within, is evergreen.

Sandie Angulo Chen: French filmmaker Claire Denis’ latest film isn’t what you’d expect from the acclaimed writer-director of 35 Shots of Rum, Bastards and White Material. The provocative 72-year-old auteur is still taking risks, but in this case by subverting the conventions of a romantic comedy. There’s no bubbly protagonist or adorable meet-cutes. Juliette Binoche, who at 54 is every bit as luminous and sensual as she was at 24, is riveting as Isabelle, a divorced artist who can’t find love as what she calls a “back alley lover” to several Parisian men – most of them married, in addition to being boorish, narcissistic, withholding, or generally awful. One man, played by Denis’ frequent actor Alex Descas, is a sweet exception, but Denis isn’t interested in a typical happy ending. Watch this for Denis and Binoche, a wonderful collaboration.

Liz Whittemore: In Let the Sunshine In, Juliette Binoche stars as a woman desperately seeking love and affection. We see sensuality, disdain, and heartbroken moments in a seemingly endless line of failed relationships. Fragile and yet commanding, Binoche captures a sense of romance, lust, and hope effortlessly. She is every woman in every relationship that has already existed. The film’s sense of time is glorious, with scenes that bleed into one another through their almost circular dialogue. Illustrating the ever-changing personalities of women in search of companionship, Binoche proves yet again that she is a legend.

Jeanne Wolf: Moi Aussi ? Me Also? Not Juliette Binoche- she’s like no other woman on screen. But for “Let the Sunshine In” she plays a woman like many many you know. Always falling for the wrong guy…letting herself be minimized by a man who lays her down and puts her down. One of her lovers asks, “How can a smart girl like you do that?” Well lots of smart girls will see a reflection of themselves in this woman who keeps bumping her heart against the wall. You know you’re in for something when the first images in the film are Juliette topless with a pudgy man pumping away on top of her. Binoche is a wonder, her body, her smile, her tears won’t let you turn away. If I have a real quibble with Let the Sunshine In – it’s that her child seems such a small part of her thoughts…so you wonder, even more, how can a smart girl do that? Gerard Depardieu, spouting psychobabble philosophy at the end of the movie is fabulous. Binoche’s face is an emotional map of questioning, hoping, acceptance and yes, sunshine.

Jennifer Merin Claire Denis’ Let The Sunshine In, a romdramcom starring Juliette Binoche, is a story told from the woman’s perspective. Binoche plays a smart and sophisticated Parisian artist and divorcee whose life is quite complete — except for true love. Her search for the perfect companion engages her with one wrong guy after another, while she seeks solace from sympathetic women friends. When judged by the Bechtel test, this film is a scandalous failure. But it works anyway as a Parisian art scene soap opera with elements of subtle satire. Binoche’s intimate performance as the perpetual victim of her own poor judgement and self-defeating relationship negotiations is convincingly obsessive, while Denis shows skill and insight in exposing a succession of selfish men who are motivated by bad habits and questionable intentions. And, the ending is a surprising explosion of satirical innuendo.

Kristen Page Kirby: The basis of T.M. Scanlon’s philosophy of contractualism — which I am only familiar with thanks to the show The Good Place, which you should totally watch — is the simple idea of “what we owe to each other.” That’s a good place to start with Let the Sunshine In, which at its core is an examination of what women (in this case, Isabelle, played by Juliette Binoche) and men (in this case, a bunch of men) owe to one another and ultimately to themselves. Isabelle knows what she wants, but continually takes steps that she knows will actively prevent her from achieving that goal. She knows — or at least thinks — that finding “true love” will make her happy, but seems surprised that casual sex, often with married men, simply repeats a cycle of unhappiness. If she wants one true love, the movie asks, why does she continually make choices that will prevent that from happening? To its credit, Let the Sunshine In doesn’t give any pat answers, reflecting the complexity of Isabelle’s relationships to men, to sex and to herself.

Marilyn Ferdinand: Claire Denis, a director who finds the human body to be a reliable canvas on which to paint her cinematic ruminations on France, colonialism, and art, to name but a few of her subjects, has finally gotten around to making a straightforward film about sex. Her protagonist, Isabelle (Juliette Binoche), is a well-regarded painter who spends almost the entire running time of Let The Sunshine In hopping from one loser man to another, seducing and being seduced, abandoning and being abandoned, and confessing that her disgust with one of her partners was a huge turn-on. Claire Denis is one of the greatest directors in the world today, but she signals her unsure grasp of this material by opening her film with a graphic sex scene, which has become my clue that a filmmaker has little faith in the film and is simply trying to grab our attention. The great director Luis Buñuel believed that obsession is quite funny to people watching it from the outside, and he knew how to highlight the ridiculousness at the core of obsession. Alas, Denis has failed to subvert the seriousness with which the French view love and sex. As a result, Let The Sunshine In is a sadly gloomy experience.

Cate Marquis Juliette Binoche plays a middle-aged Parisian artist who is searching for true love, the French-language Let the Sunshine In. Director Claire Denis takes us on as emotional journey with Binoche, one that leads more to self discovery and insights than romance, as her character explores romantic possibilities. Surprisingly, this is the first film collaboration of these two giants of French cinema. The film is billed as romantic comedy but the comedy is both subtle and very French. Also very French are the conversations, which often tend towards the philosophical and world weariness, with a dash of idealistic hope. Read full review.

Title: Let The Sunshine In