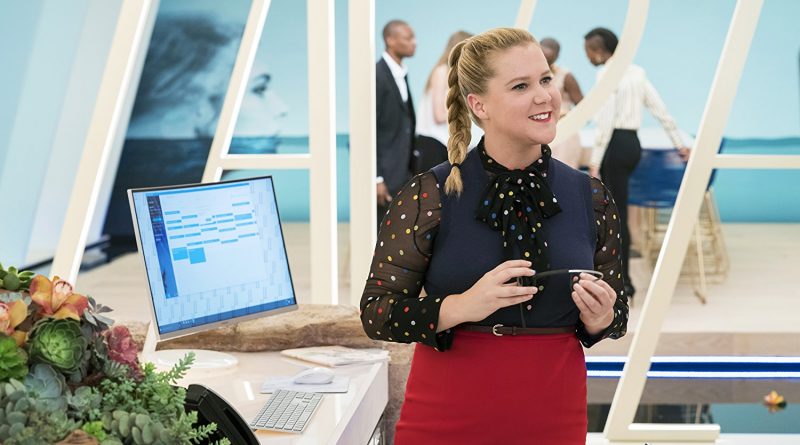 No matter how much you want to feel amused by I Feel Pretty, you’ll have to settle for merely musing. This film is predictable and derivative, and its message is so old and hoary. To wit: Beauty comes from the confidence generated from inside us women and not from a mascara wand or concealer stick. Continue reading…

To effect this message, the protagonist, Renee Bennett, bonks her bean in exercise class. Before Renee’s fall, she asserts herself with her two BFFs on a website promoting partnering. After her fall, she is sure that she is beautiful. She pats her rounded torso as if she were a man stroking his beer belly proudly. As the new Renee, she flirts with a stranger. He sees her, really sees her, but she is so full of her new self that she doesn’t see him seeing her. She forges on, knifing her considered opinions into her new role at a cosmetics company. The company is launching products for the downscale market at Target. Renee is that market.

Unlike Trainwreck and Snatched, earlier vehicles for Amy Schumer’s humor, I Feel Pretty is devoid of funny. Not a line to remember or repeat, given that Abby Kohn and Marc Silverstein’s script is barren. Their direction is frenetic but not productive.

Schumer, however, reveals that she can act even with this lackluster material. Every time she peers into her mirror as Renee, Schumer shows nuance and skill. Would that she had material to work with as she did on her television show.

She works well with co-stars Lauren Hutton, Michelle Williams (who parodies her own advertisements), Aidy Bryant, and Busy Phillips (married to Silverstein). However, except for the nudity and profanity, the main character Schumer plays could have been played by Rosalind Russell in the Thirties or Debby Reynolds in the Fifties but without those actresses’ perkiness or their films’ memorableness.
Instead, this decade’s I Feel Pretty feels as flat as pancake make-up.

This is Martha Baker with a KDHX film review of I Feel Pretty.