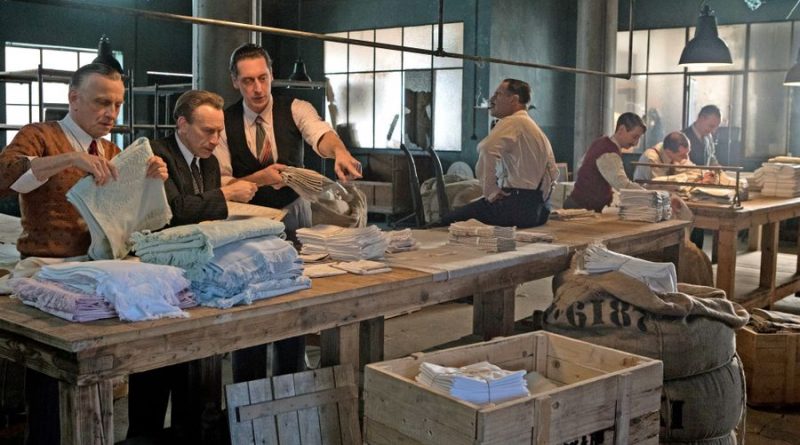 Set in Frankfurt in 1946 after World War II, this is the droll story of a group of Jewish survivors living in a U.N. Displaced Persons camp who band together to sell high-end ‘dowry’ linens to raise enough money to emigrate to America. Led by David Bermann (Moritz Bleibtreau), whose family’s once-elegant linen emporium was ravaged by the Nazis and now stands in ruins, they become peddlers. Continue reading…

“It’s an art,” David explains. “Anyone can solicit. It’s the sales pitch, the show that counts. Your customers should basically kneel down and beg to buy from you.”

But then he’s summoned by American Army Intelligence Investigator Sara Simon (Antje Traue), who has become suspicious about how he got preferential treatment in the concentration camp when his parents and brothers were killed at Auschwitz. Was he, perhaps, a Nazi collaborator?

Not exactly. Overheard telling a joke, Baumann was summoned by the Commandant (Christian Kmiotek) to embark on a bizarre Special Assignment. Since Hitler was scheduled to meet with Mussolini, who was known as a jovial storyteller, Bauman was to travel to Berlin to teach the Fuhrer how to tell a joke.

As the interrogation continues, it becomes obvious that, while David Baumann served as a reluctant court jester in the death camp, he actually had other plans in mind.

Adapted from the first two books of German-Swiss novelist Michel Bergmann’s Teilacher trilogy, it’s skillfully directed by Sam Garbarski (“Irina PalmI”), who blends comedy with tragedy, revealing the backstories not only of David but also of his ‘hawker’ comrades who note, “We’re the Jewish revenge.”

In German with English subtitles, “Bye, Bye Germany” is a bittersweet, picaresque 7, not your usual Holocaust-inspired drama.