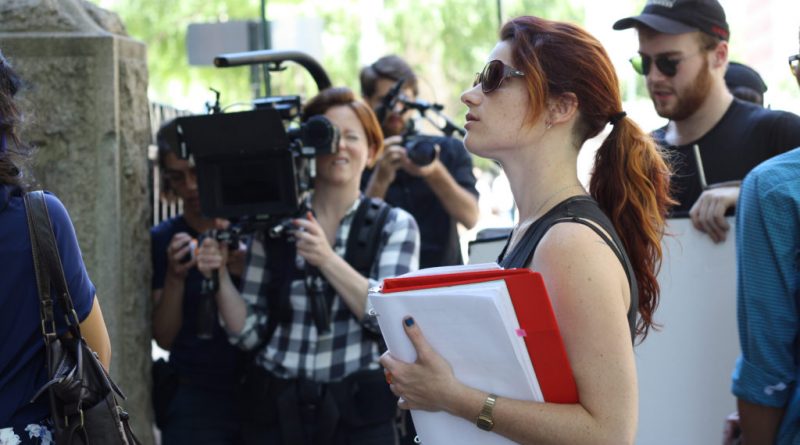 When filmmaker Jessica Thompson won the Audience Award at 2017’s SXSW for her engaging, gritty debut drama The Light of the Moon, she wasn’t exactly expecting it. “I didn’t think it was funny enough,” the Sydney native said of the film, a New York set story that doesn’t tread easy territory, following a talented architect named Bonnie (Stephanie Beatriz in a gutsy and under-sung performance) as she grapples with the aftermath of a brutal rape. While the subject matter is dark, Thompson’s critically acclaimed film approaches it with subtlety and humor. Continue reading…

The film’s Brooklyn setting feels completely authentic. The apartment in which Bonnie and her boyfriend Matt (Michael Stahl-David) reside resembles one a young couple might be able to afford. Thompson and Beatriz pull you effortlessly into the story by introducing Bonnie as a spiky, funny, highly intelligent and competent young woman who is assaulted while walking home in the dark alone.

But Thompson’s film isn’t about revenge, it’s about the day to day process of rebuilding and healing. It finds humor in moments that are realistic and unexpected (Matt’s well meaning attempt to cook dinner, for one), making it an incisive depiction of a relationship in turmoil. Watching the film – particularly with an audience – makes it’s clear why Thompson’s first film, released theatrically in November, 2017, by Imagination Worldwide and now available for viewing on Amazon and iTunes, stands out in a flooded indie features market.

Talking to Thompson, I learned that the SXSW Audience Award capped a remarkably thorough and swift production process from page to screen, culminating with a sixteen day shoot that Thompson and her crew pulled off on what truly was a shoestring budget.

First Inspirations and an Actor’s Point of View

Thompson grew up in a working class suburb of Western Sydney, the daughter of a single mother from Malta whose second language was English. She remembers the specific moment when she fell in love with film. It was 1997, she was twelve years old, and she sat down with her family to watch Braveheart. Thompson is quick to point out that this was before the allegations against Mel Gibson.

“Just before the crescendo to what has to be one of the most epic and memorable finales of all time, my mother demanded I go to bed,” Thompson says. “After chucking a major tantrum, I stormed off upstairs and unfolded a master plan. I put an old-school alarm clock under my pillow and set it for 2:30am (this was pre-smartphone days). Then I snuck quietly downstairs to watch the infamous “freedom!” scene and see William Wallace torn apart. And that was it, I was hooked. I stayed up the rest of the evening, went through the Yellow Pages (this was pre-internet as well) and wrote down every Drama Academy I could find.”

The next day Thompson enrolled herself in drama school, where she studied acting and writing. At age fourteen, she took a retail job to help pay the fees. Her mother never said no, and Thompson never waved from her conviction that she wanted to become a filmmaker. “I am happy to say that my taste has become a bit more refined since then, though I still love my epic period-pieces,” Thompson says. “I spent the remaining years of high school renting VHS and DVDs from the local Blockbuster and educating myself on the classics. Kubrick is probably still my favorite director of all time and I proudly still have all of his works on VHS tape.”

Beginning at the End

Thompson fell in love with editing while at university. “I realized that this was a solid pathway to become a director – not just because of the skills and lessons in constructing and telling a story, but also because you spend a lot of time with other directors and producers in a confined space.”

Shortly after finishing her studies, she landed a job as an assistant editor at the oldest post production house in Australia – Mike Reed & Partners Post Production. There she met one of her editing mentors, Gabriella Muir. “She really took me under her wing and taught me a lot about the business,” says Thompson, who pursued editing with the end goal of directing firmly in her mind. “Editors are the third storytellers,” Thompson says. “The script, story, tone, mood of a film can greatly change in the edit room and I think it benefits me to have a deep understanding of the power and processes behind that aspect of storytelling. Also, it makes you a faster director – I edit in my mind while I’m directing and see how it will all come together.”

After working full time in Sydney for three and a half years, climbing the ranks from assistant editor to editor – “I really sharpened my post-production skills” – Thompson was ready for new opportunities. She decided to move to New York in 2010, and within months was hired as Production Manager and Associate Editor on Academy Award nominated filmmaker Liz Garbus’ feature film, Love, Marilyn. On that film she had the opportunity work with luminaries including Viola Davis, Uma Thurman, and Adrien Brody, as well as with acclaimed Director of Photography, Maryse Alberti. Thompson was then hired as editor on the Emmy-nominated “Back on Board”, distributed by HBO.

Not a Revenge Story

The Light of the Moon is loosely inspired by true events that happened to two of Thompson’s friends. She dove into the story as her first feature because she hadn’t seen anything like it. “I was sick of seeing rape depicted as a plot device,” Thompson says. “I wanted to create a raw and realistic portrayal of trauma and recovery, which is solely told from a victim’s perspective. By exemplifying unrealistic plot lines and distorted depictions, Hollywood is perpetuating the culture of victim shaming and blaming by putting the onus on the victim to serve justice to their perpetrator.”

Thompson first went down a self-proclaimed rabbit hole of research, attending seminars, speaking to assault survivors, medical professionals, examining doctors, social workers, anti-violence organizations, lawyers, and police officers. She even learned how to administer a rape kit. In her research, it became very clear that realistic depictions of rape and their aftermath had not been shown on screen. That became the jumping off point for the story, which is definitively told from a woman’s perspective.

She began writing the script in January 2015, adopting acting techniques she’d learned years before, improvising scenes out loud and fully immersing herself into each character. She recruited actor friends for script readings after each major draft. She also worked hard to nail the right tone. Beatriz’ Bonnie uses humor as a coping mechanism throughout the film, and it was incredibly important to Thompson that – as in life – dark is inextricably bound with light. “I was very cognizant of not just playing the “victim card,” adds Thompson. “I really despise this often overused troupe of victims being humorless, it is highly unrealistic and does not do justice to the survivor. I added Bonnie’s gallows humor for the same reason I made her a sexual being after the rape – she was funny, independent, sexual before the rape and she is after – I feel those aspects were important to show.”

Thompson met producer Carlo Velayo her first day of university, and he went on to produce all of her short films. When she told him she was ready to make her first feature, he moved to New York from Australia to produce it.

She met producer Michael Cuomo, another producer, through a chance encounter at a “frat boy style party that we were not particularly enjoying.” Simply out of his belief in the script, he began to make introductions to people who played pivotal roles in getting the film made – including Casting Director Bess Fifer and Orange is the New Black star Catherine Curtin. He also insisted that the script was strong enough to attract name actors, and Beatriz was at the top of Thompson’s list.

“From her role in “Brooklyn Nine-Nine”, I knew (Beatriz) had the acerbic wit that is instrumental to Bonnie’s character and that she’d be able to pull off the demands of the drama, due to her roles in “Short Term 12” and her extensive theater background,” Thompson says. “I read a few articles where she spoke out about the lack of roles for Latina women and I wholeheartedly agree. I had written this role specifically for a Latina actor and after reading her comments, I just had a gut instinct that she was the right choice.” Cinematographer Autumn Eakin, initially skeptical about the subject matter, was so taken with Thompson’s wit, humor, and raw, complex emotion that she signed on quickly. Co-producer Myriam Schroeter joined the team, and Big Vision Empty Wallet partners Dani Faith Leonard and Alex Cirillo soon came on board as Executive Producers, “because of the realistic and graceful way Jessica approached the difficult topic of sexual assault and the opportunity for meaningful conversation around it. That’s the believability and specificity that Jess will continue to bring to any genre she works in.” Cirillo and Leonard had such a positive experience they began developing a new TV series with Thompson.

“Jess is director but she’s collaborative, decisive but open to what may come,” Eakin adds.

Prior to production, Thompson insisted on rehearsing with her actors for a week, and though the script didn’t change, Thompson and her actors developed a bond early on.

Moviemaking on a ShoeString

The Light of the Moon was shot in sixteen days in June 2016, with Thompson and her producers raising additional funds every step of the way. Thompson ended up editing the film herself and even donated her eggs during the post production phase to keep the production afloat.

“Emotionally, the hardest part was overcoming the fear of failure,” Thompson says. “Making an independent feature film is so much responsibility – you have around 90 people working on your film, they are all taking major pay cuts or volunteering their services, and they are all putting in so much of their energy because they believe in you and your idea.”

Thompson’s tenacity, determination, and painstaking work was rewarded, even before the remarkable response she received at the SXSW premiere.

“The most rewarding moment was when the entire cast and crew exuberantly yelled a collective “THAT’S A WRAP!” at the end of the final day of production,” says Thompson, who is currently developing several projects and recently shadowed on The Handmaids’ Tale. “From that twelve-year-old girl saying “I want to be a filmmaker”, it took almost 20 years to hear those beautiful words and I felt completely content in that moment.”

Thompson’s perseverance, gumption, and attention to detail should be a guiding light for young women looking to work in film, as should her propensity to integrate a wide set of skills into a signature directorial style. She lead a loyal and devoted crew through weeks of grueling low budget filmmaking with a positive attitude. She accomplished the difficult task of crafting a critically acclaimed feature that is both important and entertaining. She is continuing to work to make films that feature female leads and are unlikely, complex, and previously untold.

Jenny Halper is the film editor of Spare Change News, a Cambridge bi-monthly dedicated to empowering the homeless. She's written for the Boston Phoenix, Boston Now, NewEnglandFilm.com, amNewYork, Beliefnet, Cinema Confidential, Park Slope Reader, and Knit Simple Magazine, among others, and has served as a film critic/entertainment reporter for Track Entertainment and ClickFlicks.net. Her fiction has appeared in journals including Smokelong Quarterly and New England Fiction Meeting House, and has been a finalist for prizes from Glimmer Train and the Sonora Review. A graduate of Northwestern University, she is currently earning an MFA at Emerson College.