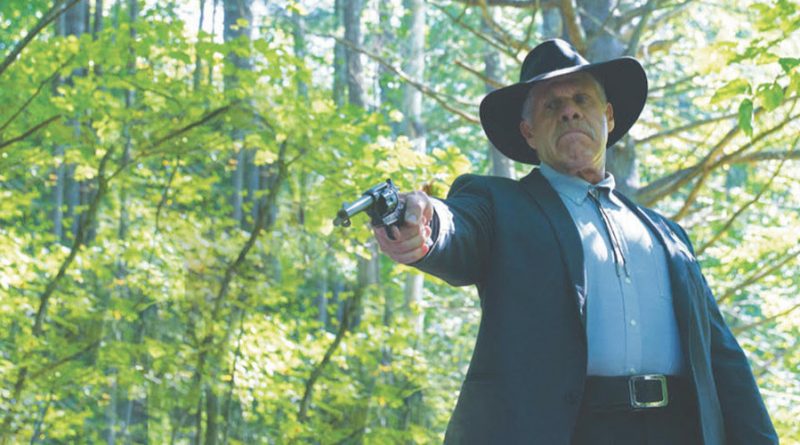 Set in upstate New York in what seems to be the 1960s, this wannabe comedic adventure begins as two bumbling deputies, Thurman Hayford (Jake McDorman) and Jim Doyle (Martin Starr), are summarily fired by cantankerous, corrupt Sheriff Wilson (Ron Perlman), because they’ve made no arrests since there’s been no crime committed in their tiny town of Shandaken for years. Continue reading…

Almost as soon as they clean out their desks and hand in their badges, the phone rings. It’s the prison warden (Ralph Cashen), alerting them that an escaped prisoner may be nearby.

Hoping to earn their jobs back, they set off into the foothills of the Slide Mountain Wilderness in hot pursuit, unfortunately using all their ammunition in fruitless gun practice, trying – in vain – to hit a beer can target. That’s followed by an idiotic encounter with three hunters in the oak and maple forest.

Eventually, they catch up with the hapless prisoner, Andre (George Semple III), crouching by his campire, only to discover that he’s probably innocent, a victim of racial prejudice and systemic injustice.

Making his first feature film, writer/director Zach Golden is best known for concocting an apparently lucrative website called whatthefuckshouldimakefor dinner.com which served up 48 million recipes and spawned his own cookbook, sold at Barnes & Noble and on Amazon.

Acknowledging his debt to John Ford and the Coen brothers, Golden says of this film : “It’s what I call a Matzoh Ball Western, which is basically a Western made by a Jew in the Catskills.”

But I suspect Golden needs to go back to Filmmaking 101, because his weakly-scripted, satirical Western never takes advantage of its talented cast, particularly Ron Perlman and Sondra James, who plays the sardonic waitress in the local diner.