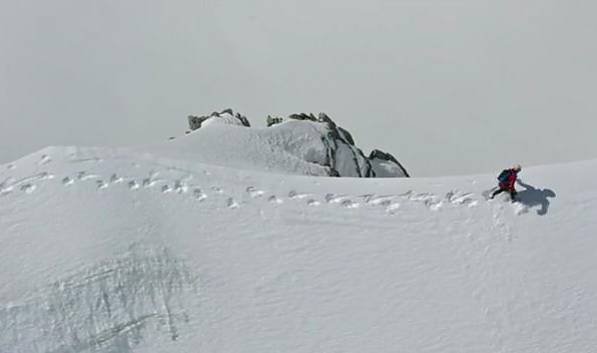 The word “majestic” doesn’t do justice to the stunning visuals in Jennifer Peedom’s documentary “Mountain” — but it’s quite possible that no word is up to the task of capturing this film’s sweeping, monumental imagery. When combined with the gravitas of Willem Dafoe’s narration and the power of the Australian Chamber Orchestra’s score (composed by Richard Tognetti), the result is a movie that begs to be seen on the largest, highest-definition screen available. Continue reading… In a lean but action-packed 74 minutes, Peedom — working from a profound script largely written by British author and conservationist Robert Macfarlane — explores humans’ fascination with the craggy, frequently snow-covered peaks that reach so close to the heavens. Until quite recently, in relative terms, people viewed mountains with a combination of fear and suspicion; they were places of mystery and danger. But then something changed, and we became obsessed with conquering them, fighting to reach their summits and prove that man can tame nature’s most perilous obstacles.

You may find yourself having to cover your eyes during scenes of rock climbers clinging to the tiniest of ledges, mountain bikers bumping down “paths” that are scarcely wider than their tires, and other elite athletes tackling feats that those of us who keep our feet firmly planted on the ground would never consider.

But it isn’t all stunts and derring do; much of the film is simply gorgeous, sweeping, magnificent footage of mountains from all over the globe, in all seasons (kudos to cinematogrpaher/mountain climber Renan Ozturk), accompanied by thoughtful insights on our relationship with the world around us. And that is more than enough. — Betsy Bozdech

Susan Wloszczyna: Mountain is a thing unto itself. It isn’t so much a documentary as it is a mesmerizingly immersive tone poem. It intentionally frees the mind — aided by a mood-enhancing chamber music score and an essay-like narration provided by Willem Dafoe — from having to absorb facts and figures or names and places. Instead, the viewer is given license to simply be in the moment while enjoying an up-close and personal perch to safely contemplate mankind’s need to conquer these soaring monoliths. Read full review.

Nell Minow: Stunningly beautiful and genuinely spiritually enlarging — breathtaking scenery, exquisite music, and poetic narration take us to locations no one but the most daring of daredevils “half in love with themselves and half in love with oblivion” have ever seen before.

Kristen Page Kirby: Some people look at mountains and think “yeah, I’d like to climb that.” Jennifer Peedom looked at those people and thought “yeah, I’d like to film them.” The film, with devastatingly lovely visuals, examines the roles mountains have played throughout human history from mysteries to be left alone to challenges to conquer. While Peedom uses plenty of footage from climbers across the world — some shots are sure to give the acrophobic among us faster heartbeats and sweaty palms — they are mostly anonymous. Instead, her focus is on the mountains, and she manages to almost make characters of them, from the foreboding snow-capped Everest to the craggier, sun-baked rocks of the American West. To her credit, Peedom doesn’t shy away from the environmental and human cost some climbers, especially those looking to summit Everest, cause to the mountains — but in the end, Mountain is a celebration of the eternal strength of the highest peaks.

Nikki Baughan: Stunning, hypnotic and insightful, Jennifer Peedom’s Mountain offers an incredibly immersive exploration of Earth’s highest peaks and the hold they have over those who would seek to conquer them. It boasts incredible cinematography, ranging from macro close ups of the weary faces of climbers to vast widescreen landscapes, which is intercut with well-chosen archive footage. Underpinned by an incredibly evocative score performed by the Australian Symphony Orchestra, which mixes original compositions with stirring classics, Peedom’s lyrical film charts our relationship with this “upper world”, from the spiritual rituals and fear of ancient civilisations to the adventure seekers of today. This cohesive, chronological narrative is particularly impressive in the absence of talking heads and expert interviews; the only voice heard on screen is narrator Willem Dafoe’s, as he speaks in sparse, reverential tones about the often dangerous attraction of these mountainous giants. Instead, we bear up-close-and-personal witness to those who would dare to take them on; from free-climbers and mountain bikers to the millions of skiers who swarm the vast snows like ants each season. This is remarkable, powerful filmmaking, and should be seen on the biggest screen you can find.

MaryAnn Johanson Jennifer Peedom is no stranger to mountains, to the mountain, even: her previous films include 2008’s Miracle on Everest and 2015’s Sherpa. Here she tackles the philosophical side of the allure and the danger of the world’s highest peaks for humanity. While other documentaries about extreme locations and extreme heights attempt to conquer them — or just to have extreme fun in them — tend to unreservedly cheer on the people, almost always men, who take on such incredible risk, here Peedom looks just slightly more askance at such endeavors. A woman’s perspective on human risk-taking is a very welcome one, and overdue. Read full review.

Pam Grady: Snow-capped glaciers, volcanoes spewing lava, soaring vistas, and humans interacting with natures with sometimes thrilling and sometimes nerve-wracking results are among the arresting images in this impressionistic documentary. Beyond the nature on view, the cinematography by mountaineer Renan Ozturk (whose own exploits have been documented in Meru and other films) is the star as it stunningly captures the majesty of the world that reaches skyward.

Jennifer Merin Australian filmmaker Jennifer Peedom’s extraordinarily beautiful and philosophically profound essay documentary soars to the heights of the world’s most remote and challenging peaks. With British author and conservationist Robert Macfarlane’s poetic narrative delivered by Willem Dafoe, cinematography by mountain climber and master cameraman Renan Ozturk and a majestic original score by composer Richard Tognetti, Mountain is an uplifting wonder. Awesome is a word too oft tossed about, but it is truly appropriate when applied to this astonishing exposition about the power of nature and how our species relates to it.

Marilyn Ferdinand: An orchestra sets up and narrator Willem Dafoe takes his place, as Australian documentarian Jennifer Peedom prepares to embark on what promises to be a unique meditation on the power and allure of mountains. A mix of breathtaking scenery and often hair-raising interactions of humans with mountain landscapes, along with some otherworldly music by Arvo Pärt and the film’s musical director Richard Tognetti, convey the idea of the harsh alien landscape that mountains have traditionally represented. However, when Peedom reviews the increasing domestication of mountains by ever more careless, bored, and money-motivated people, she inadvertently cuts mountains down to size herself with cliché music choices like Vivaldi’s The Four Seasons and the appeal of stunt sports like base jumping. This turn away from her more spiritual focus may have been motivated by underprocessed feelings about the tragic consequences of the commercialization of Everest she documented in her 2015 film Sherpa, as Mountain extends her critique and alludes to the grief of those whose loved ones died in 2014 acting as sherpas for paying customers looking for a unique experience to dine out on. Nonetheless, I found many parts of the film moving, particularly her use of time-lapse photography that makes it seem as though the mountains breathe. Whether or not she should be anthropomorphizing mountains, as she does with this sequence and in her narrative, is a question I’ll leave hanging.

Cate Marquis Mountain starts in a different way from most films about mountains and their majesty. Instead of opening with mountains, we see black and white images of an orchestra tuning up and actor Willem Dafoe preparing to deliver his narration as the opening credits roll. Then there is a brief quote, “Those who dance are considered mad by those who cannot hear the music,” and the mountains make their entrance. Perhaps that opening quote describes those who risk all just to climb the planet’s highest peaks. Those peaks, and mankind’s relationship with them, are the subject of Jennifer Peedom’s visually-soaring documentary. Read full review.

Esther Iverem: Mountain is at it’s best when it presents the awe and power of some of earth’s highest peaks. It is less successful when it devotes the lion’s share of intellectual musing to the pursuit of mountain climbing. The movie gets stuck in the middle: it neither fully explores these giant land masses nor explores the determination of Western civilization to conquer nature.