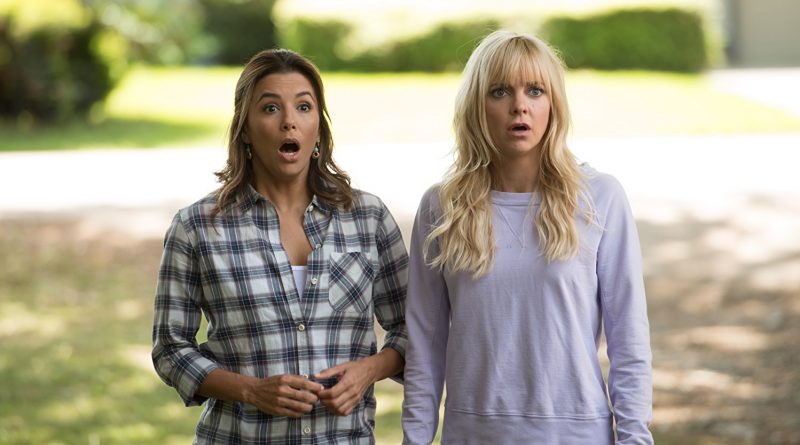 Question: Why remake Garry Marshall’s screwball comedy starring Goldie Hawn and Kurt Russell? Answer: Hollywood’s push for diversity now focuses on Latin American superstar Eugenio Derbetz. In the original, Hawn played a snobbish, spoiled heiress who hires carpenter/widower Russell to remodel a closet on her yacht. Then she rudely refuses to pay his bill. Later that night, when she falls overboard and develops amnesia, Russell claims she’s his wife, the mother of his four boys. Continue reading…

Which may explain why, when Leonardo falls into the water, hits his head and develops amnesia, Kate’s boss Theresa (Eva Longoria) encourages Kate to get revenge by forging documents and pretending he’s her husband/father of her three daughters.

Which is not difficult since Leonardo’s greedy sister Magdalena (Cecilia Suarez), hoping to gain control of the family business, concocts a story that her brother was devoured by sharks.

The ploy works. Kate brings Leonardo home so he can help around the house and work as a day laborer in construction. Oddly enough, when he’s forced to behave like an ordinary man, Leonardo evolves emotionally and connects with Kate’s kids.

Adapted by Bob Fisher and sitcom-writer-turned director Rob Greenberg from Leslie Dixon’s original screenplay, about a third of the dialogue is in Spanish with Hispanic pop culture references that may be significant for Latiino audiences.

Unfortunately, unlike Russell and Hawn who were obviously in love back in 1987, there’s no chemistry between Derbetz and Faris.

On the Granger Movie Gauge of 1 to 10, “Overboard” is an insipid 4, and a tasteless mid-credit sequence leaves viewers over-bored.