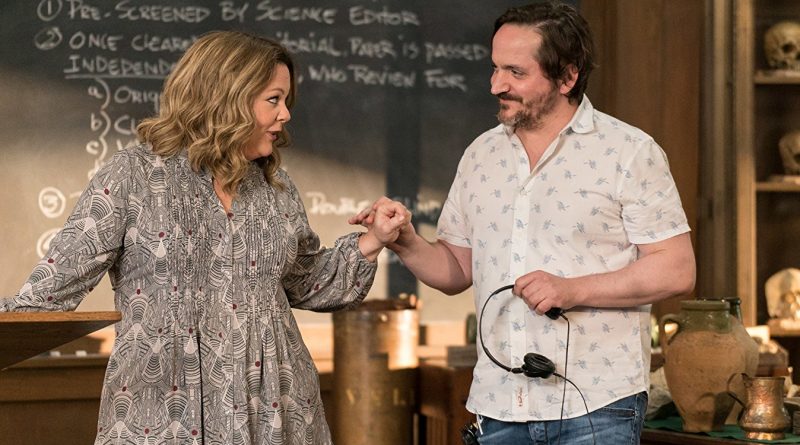 Actress/producer/co-writer Melissa McCarthy collaborated with her husband/director Ben Falcone on this flaccid, cliché-riddled mom-com, set at (fictional) Decatur University. It begins as Deanna (McCarthy) and her husband, Dan (Matt Walsh), drop off their daughter Maddie (Molly Gordon) at her sorority house for her senior year. Leaving the campus, Dan tells her he wants a divorce; he’s having an affair with a real-estate agent (Julie Bowen) who has already put their house on the market. Continue reading…

After an Uber driver (Ben Falcone) totes her to the home of her parents (Jacki Weaver, Stephen Root), stunned yet spunky, Deanna decides to go back to college to get her archaeology degree since she dropped out during her own senior year for marriage and motherhood.

While Maddie’s understandably a bit dismayed, her sorority sisters adore clueless-but-kind Deanna, accepting her as one of their own. One of the more interesting is known as Coma Girl (Gillian Jacobs) because she was hospitalized for eight years. She’s a math-challenged hoot, along with Deanna’s BFF (Maya Rudolph), who swills wine coolers on the racquetball court.

Sure, there are a couple of mocking Mean Girls (Debby Ryan, Yani Simone) and Deanna’s mysteriously agoraphobic, Goth-y roommate (SNL’s Heidi Gardner), but what’s most surprising is Deanna’s hot-to-trot romance with a sweet, wine-loving frat boy Jack (Luke Benward) which has an unexpectedly outrageous twist.

Too bad they never pursued a ripe romance with Deanna’s archeology professor, (Chris Parnell), instead of wasting a Christina Aguilera celebrity cameo.

It’s become obvious that, while Melissa McCarthy is deliriously happy with Ben Falcone, he’s not her best director, as evidenced by their previous collaborations on “Tammy” and “The Boss.” Her brassy, bawdy comedy was far more effective under the guidance of someone experienced, like Paul Feig (“Bridesmaids,” “Spy,” “The Heat,” “Ghostbusters”).

On the Granger Movie Gauge of 1 to 10, “Life of the Party” is a floundering, forgettable 4, as McCarthy becomes the party-hearty, class clown.