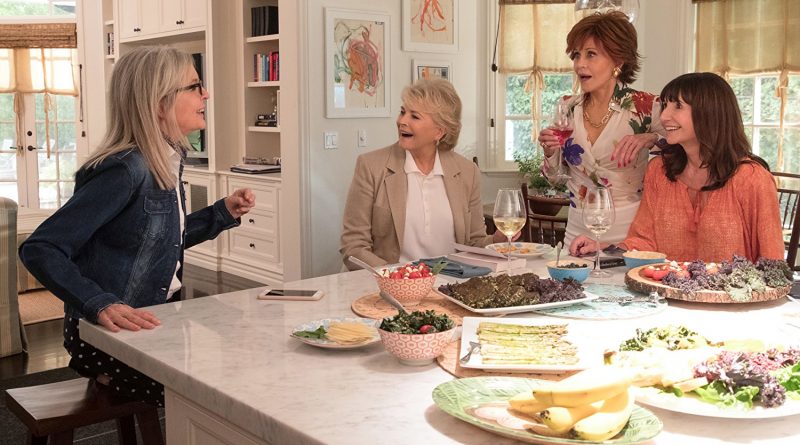 Because advertising and trailers can be deceptive, part of a movie critic’s job is to steer audiences to films they may enjoy. This poignant rom-com is directly aimed at older adults – and the matinee audience with whom I viewed it burst into spontaneous applause at the conclusion. In suburban Santa Monica, four lifelong friends meet regularly to sip wine, nibble canapes and discuss their lives as they relate to the chosen book they’re all reading. Years ago, they began with Erica Jong’s “Fear of Flying,” and now they’re into the purple prose of E.L. James’ “Fifty Shades of Grey.”

Capturing some of the fun of “The First Wives Club,” each woman represents a particular stage of romantic life: Jane Fonda’s sexy, vivacious Vivien is a wealthy, workaholic hotelier who has always avoided emotional commitment – until, suddenly, old flame Arthur (Don Johnson) tracks her down, still calling her “Slim.” Candice Bergen’s Sharon is an acerbic federal judge who hasn’t had a relationship since her divorce 18 years ago. But now that her ‘ex’ (Ed Begley) has a decades-younger fiancée (Mircea Monroe), she’s reluctantly risking dinner with Internet dates (Richard Dreyfuss, Wallace Shawn). Recently widowed after 40 years of marriage, Diane Keaton’s skittish Diane is fending off grown ‘helicopter’ daughters (Alicia Silverstone, Katie Aselton) who want her to move near them in Scottsdale, Arizona. On a plane, she meets Mitchell (Andy Garcia), a suave pilot who asks her out. And Mary Steenburgen’s Carol is a successful chef/restauranteur whose once-sparky marriage to recently retired Bruce (Craig T. Nelson) has recently, inexplicably gone
stale.

On the Granger Movie Gauge of 1 to 10, “Book Club” is a sweetly saucy, senior 7, a feel-good chick-flick.