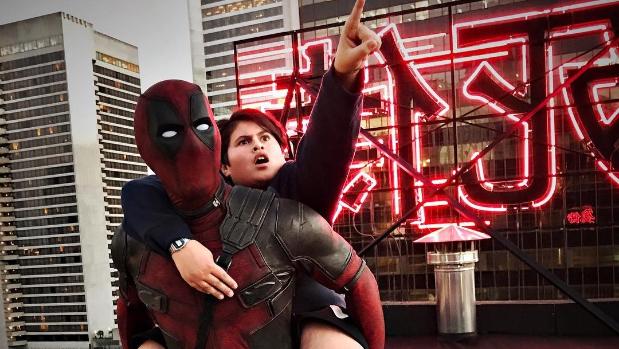 Bottom line: this subversive sequel is long, loud – and very funny! The foul-mouthed, facially disfigured, yet indestructible anti-hero Wade Wilson (Ryan Reynolds) is still madly in love with Vanessa (Morena Baccarin) and they’re thinking of having a baby, when tragedy strikes. Vengeance is inevitable. Continue reading…

Plus, he’s determined to protect orphaned Russell (Julian Dennison), a troubled teenager who happens to be a fire-fisted mutant and views Wade as a surrogate father figure.

Wise-cracking Ryan Reynolds is the creative force behind Deadpool, including co-writing with Rhett Reese and Paul Wernick. He’s so delighted that the original is the second-highest-grossing R-rated film, behind “The Passion of the Christ”), that this factoid is used as one of the many in-jokes.

Yes, there are lots of gruesome decapitations and severed limbs, along with self-aware star cameos, like Wolverine (Hugh Jackman), still alive in this timeline, and others that will surprise you – with Celine Dion’s “Ashes” serving as the theme song.

Plus, there’s a running joke that the song “Do You Want to Build a Snowman?” from “Frozen” sounds exactly like “Papa, Can You Hear Me?” from “Yentl.” FYI: Barbra Streisand is Josh Brolin’s real-life stepmother.

On the Granger Movie Gauge of 1 to 10, “Deadpool 2” is a smarmy, snarky 7 – with outrageous post-credit scenes – whether you’re a fan of superhero sagas or sick of them.