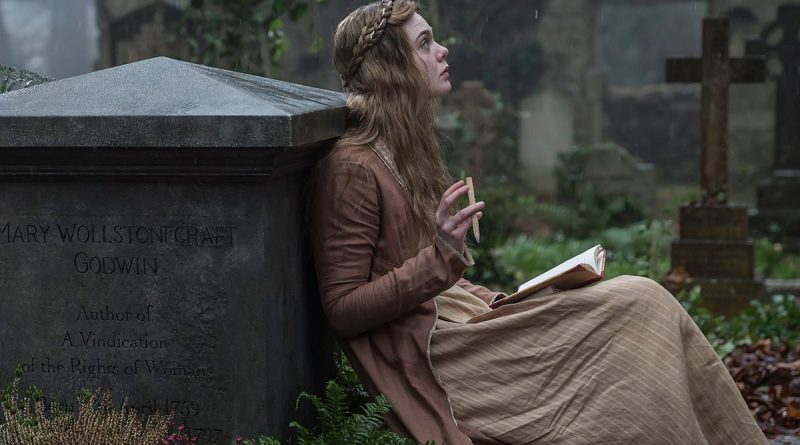 It is a bit surprising that no one else has made a movie about English author Mary Wollstonecraft Shelley and the writing of her book Frankenstein, arguably the first science fiction novel. Interestingly, it is Haifaa Al-Mansour, a ground-breaking woman who directs Mary Shelley. Al-Mansour is the first Saudi woman director, and the film’s script is by another woman, Emma Jensen. Elle Fanning plays Mary Wollstonecraft Godwin, the teen girl who falls for poet Percy Bysshe Shelley, an admirer of her radical philosopher father William Godwin. Continue reading...

Although the 21-year-old Percy Shelley was already married, Mary ran off with him, taking along her step-sister Claire. The idea for Frankenstein was born the couple’s visit to Lord Byron at Lake Geneva, Switzerland, where it was suggested that all the house guests write a ghost story. A nightmare sparked Mary’s idea, although the full novel was not written until later.

Of course, she is not Mary Shelley but Mary Godwin throughout most of this story, as they married later. But Mary Shelley is the name on the book and the one everyone knows.

The film is filled with dark, brooding Gothic imagery, and has suitably atmospheric, Gothic romantic locations. The film focuses more on the the status and powerlessness of women in early 19th English society than on Mary Shelley’s writing or her famous novel.

Fanning is a fine actress but seems a bit miscast, a bit too innocent and conventional for this strong woman, who endured even more tragedy than we see in the film as well as the restrictions placed on women in the era. As Percy Bysshe Shelley, Douglas Booth is suitably handsome and romantic but again the character seems narrowly defined and too one-note. Similar comments could be made about Tom Sturridge as Lord Byron, but Bel Powley fares better as Claire, playing a touching character who is both adventurous and foolish.

The film takes some liberties with the facts, omitting the couple’s travels through Europe, which served as research for Mary’s novel, and generally taming things down from wild life they led. Instead, the film seems to place them always in the same cramped rooms and life of stiffing poverty. Not surprisingly, neither Percy Shelley nor Lord Byron come across well in this film.

It is a fantastic subject for a film but instead of painting a fuller portrait of a complex Mary Shelley, the script opts for a simpler storyline to deliver a message about the restrictions placed on women in this era. The remarkable Mary Shelley deserves more.

Mary Shelley is a polished costume drama but one that is less about the person who wrote Frankenstein and the range of her experiences than about the way the whole patriarchal structure of English society prevented women from being recognized as thinking beings who might write and publish books.