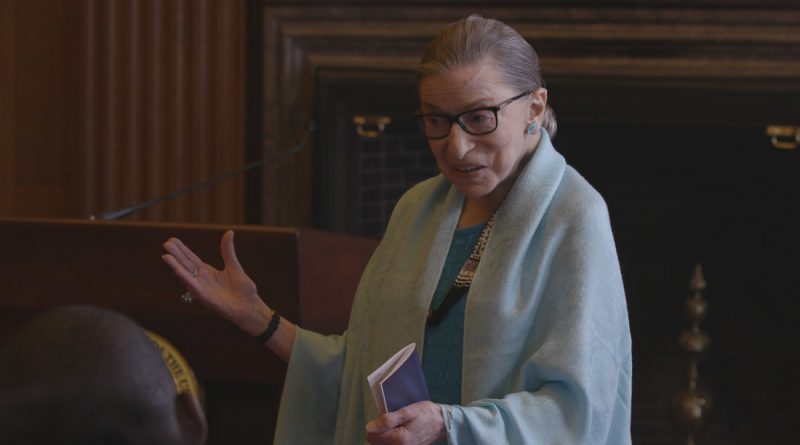 RBG celebrates Ruth Bader Ginsburg’s amazing career and life. Twice in the documentary, Ruth Bader Ginsburg quotes nineteenth-century abolitionist and suffragette Sarah Grimké, “I ask no favor for my sex. All I ask of our brethren is that they take their feet off our necks.” RBG’s decades of legal work is testament to her lifetime commitment to human dignity and equality. Continue reading…

For those of us who flatter ourselves that we know quite a bit about Ruth Bader Ginsburg, the film RBG is a treat for its additional, engaging and often surprising breadth and depth of content in a quick ninety minutes. Directors Betsy West and Julie Cohen masterfully interweave comments from RBG’s son, daughter, granddaughter and friends with analysis from a heady group: President Bill Clinton, Judge Harry Edwards, NPR’s Legal Commentator Nina Totenberg, Gloria Steinem, her personal trainer Bryant Johnson, clients and colleagues. But most of all, the most delightful voice is that of RBG herself who epitomizes confidence and intelligence. Her principled moral compass took her six times to testify before the Supreme Court beginning in the 1970s, well before taking her seat there in August 1993.

Among the inspirational takeaways here I rank Ruth’s husband Marty as the ideal husband, fully supportive of his talented wife, never intimidated by her but, instead, thrilling to her success. Once Ruth sat on the Supreme Court, Marty did have to insist she come home late at night (or early in the morning) for dinner and a few hours’ sleep. RBG’s work ethic was and remains beyond astonishing. She juggled children and career demands in law school, helped launch the ACLU’s Women’s Rights Project in 1971, served as Judge of the U.S. Court of Appeals for the District of Columbia, and then ascended to the Supreme Court.

As enchanting, Bader Ginsburg has a quick wit and an infectious sense of humor, though Marty more often cracked the jokes. Marty died in 2010 after battles with cancer; RBG has survived two bouts with cancer herself. As if all that weren’t sufficient for a praiseworthy life, RBG models enviable collegiality, a fellow opera lover and friend with her political opposite Antonin Scalia up to his death in 2016. RBG is already on my list as one of the year’s best documentaries.