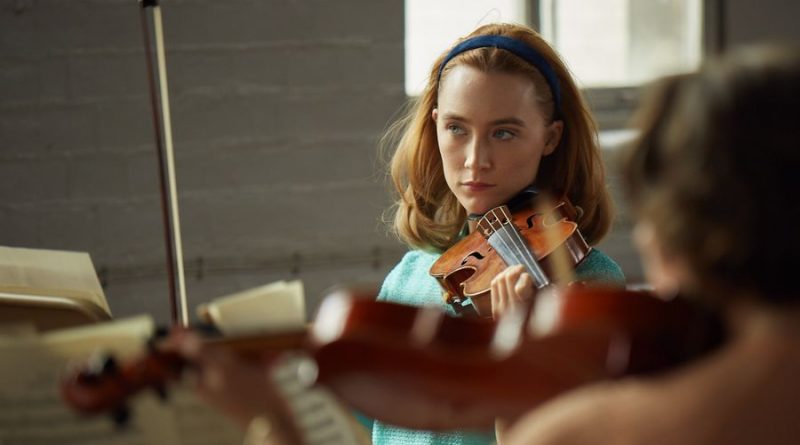 Ian McEwan is known for turning over rocks. Under them, he finds secrets, lies, sex, and truth. In On Chesil Beach, he finds all of those plus music. He centered his novel and screenplay on the wedding night of two innocent virgins, Florence and Edward. The year is 1962. These two youths wanted to be wed even though she is a classical violin player and he’s a rock ‘n’ roll fan. The only musician they agree on is St. Louis’ Chuck Berry, who in Florence’s estimation is “bouncy and merry.” Continue reading…

The film begins on Chesil Beach, a rocky strip with water on either side. Crunching along the beach — Ed in his perennial plimsoles, Florence in flats — the couple discusses the things that intrigue young people falling in love. The film quickly switches to their honeymoon suite where bumbling waiters embarrass the couple but nothing like the anticipated sexual activity they’re supposed to engage in. That offers challenges far beyond their abilities or knowledge.

Saoirse Ronan plays Florence. Ronan, fresh off her transcendent work in Lady Bird, also performed in McEwan’s Atonement in 2007. She has to tread quite a circle of emotion in On Chesil Beach, and she does. Billy Howle plays sweet, clumsy Edward believably. Emily Watson and Anne-Marie Duff put in cameos as the mothers.

Dominic Cross’ direction honors McEwan’s sentiments, even when they edge toward the creepy from the introspective. Dan Jones’ music, both classical and modern, rips through scenes, offering contrasts beyond the characters’, providing focus as well as pulling from focus. On Chesil Beach appeals to the psychoanalytical perhaps more than to the sexual or musical, but they’re all there for the taking.