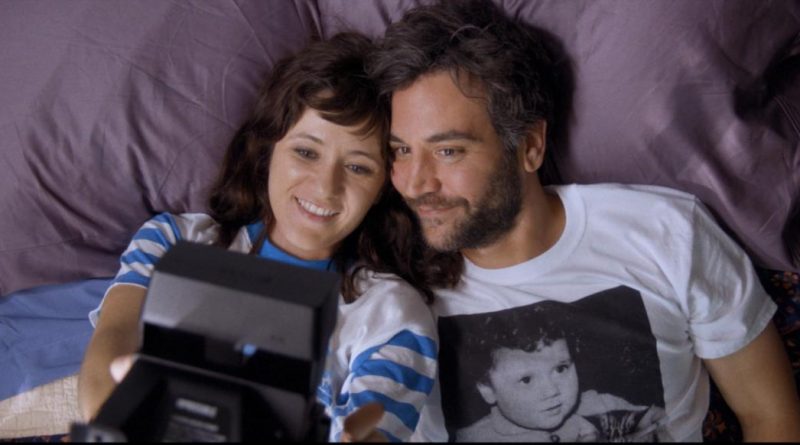 Writer/director Theresa Bennett’s debut feature film Social Animals is a light, quirky comedy about modern romance, Austin, TX style. Social Animals doesn’t offer social commentary, so much as kind of mock social commentary, and is so packed with quirk and ironic Millennial humor about sex, friendship, relationships and just trying to make a living, that it may explode. Continue reading…

The central character is Zoe (Noel Wells) who likes her sex straightforward but prefers one-night stands to guys who stick around. Instead, she just takes a Polaroid snapshot of each one and keeps those. Zoe drinks too much, smokes weed and just can’s seem to get her life together. She’s never been in love, and is not too impressed with the relationships she sees around her. Like the one her best friend Claire (Carly Chaikin) is in. Claire is engaged to a Republican man who is so mad for the party that he makes her wear a George W mask in bed. Claire says she’s in love but there is a joylessness to her unconvincing assertion.

Most of the humor in Social Animals is of the quirky/silly sort, or the ironically obvious, like the obligatory scenes of Zoe giving painful wax jobs to her clients at her little shop, House of Wax. Zoe’s business is failing, crushed by the Brazilian waxing chain across the street, which has customers lined up (coffee shop owners next to a Starbucks will sympathize). Zoe’s also behind on her rent, and her landlord (or “lawn-lord,” since he just owns the lawn her house trailer is parked on – a tidbit of clever wordplay) is threatening eviction. Worse, she’s turning 30!

All the characters in this film are doing their best to fulfill their hometown motto to “keep Austin weird.” The film has an excess of quirk, maybe more than many can tolerate, although the relationship between Zoe and Claire has some grounding in the real. The problem with this film comes in the conventional attitudes underneath all the unconventional surface.

Given the moment that women’s issues are having now, perhaps the Bechdel test should be applied to this film. Social Animals does meet the criteria of having 1) two women in it, 2) who talk to each other, 3) about something other than a man – but it feels like it just barely passes. The film’s biggest strength is the friendship between Zoe and Claire. They do talk about their friends, kid around, and Zoe talks about feeling pressured because she has never been interested in the conventional goals of marriage and children, and about her worries about her precarious financial situation. But while Zoe pours out her troubles to Claire, both of them seem to attend rounds of wedding and baby showers for their more conventional friends – well, this film’s version of conventional – keeping those traditional values at the forefront. And then it introduces a potential love interest for Zoe.

Paul (Josh Radnor), the cute guy who owns the video store (a Clerk reference, ya think?) across the street, is appealing, and he and Zoe make sense together. But he’s married and has three kids, although the marriage is troubled, with the kind of strange, symbolic troubles all the characters in this film have. But it still just makes you kind of think – is this where this story should have gone? OK, it’s a comedy – but comedies have been known to say bold things sometimes. Instead, nothing very earth-shattering happens in this quirky rom-com, just things change and life goes on, but the audience gets a sweet ending that is more conventional than it might have been.