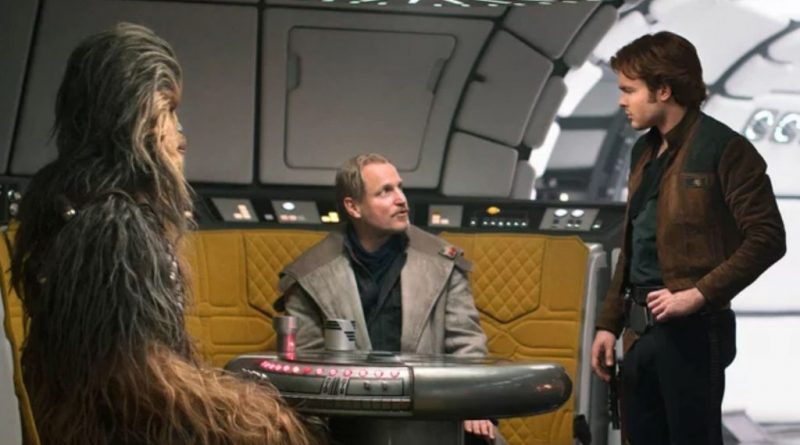 Many have been Star Wars fans from its 1977 debut, have faithfully followed subsequent episodes, and have forgiven occasional missteps. But with the latest chapter, Solo: A Star Wars Story, profound disappointment will overtake us with the direction of the franchise, that is, more the video game route instead of ideas steeped in mythology and archetypal themes, what we loved. Continue reading…

The problems extend from characterization to plot. First, character: as Han Solo, Alden Ehrenreich effects Han’s established arrogance and takes a stab at his swagger, repeatedly photographed in western gunslinger poses. But there’s no character arc or suspense as scenes race by, director Ron Howard evidently afraid to slow down for emotional development beyond shorthand suggestions. As this episode’s love interest Qi’Ra, Emilia Clarke needed more development, which she definitely could have handled.

Similarly, Woody Harrelson as the duplicitous Tobias Beckett is his exuberant self and Donald Glover mischievously brings Lando Calrissian to life, but their marvelous talent could have telegraphed much more complexity if the story hadn’t hinged on mad dashes, intergalactic escapes, and shootouts. That may be strategic since, when the action stops, dull dialogue wouldn’t challenge a ten-year-old and some babble about crime syndicate Crimson Dawn goes nowhere even as these lovable rebels conspire to steal highly explosive, hyperfuel coaxium. Bradford Young’s cinematography and Gary Tomkins’ art direction rely on ugly grey and brown tones with dim lighting in some scenes rendering events nearly impossible to see. John Williams wrote a new Han Solo theme and the tried-and-true “Star Wars” one returns, a pleasing, obligatory inclusion. But John Powell’s score becomes an annoying, continuous backdrop, apparently needed to prompt us as to how we should be feeling.

On a positive note, editor Pietro Scalia does move “Solo” quickly through its two and a quarter hours, and the production crew adds several fanciful creatures, especially L3-37, Lando’s droid copilot who has an entertaining, even touching personality. Yes, Solo answers many questions and fills in some backstory, but it’s a sign of the times, I suppose, that a once richer offering of characters, themes and ideas has surrendered to game time.