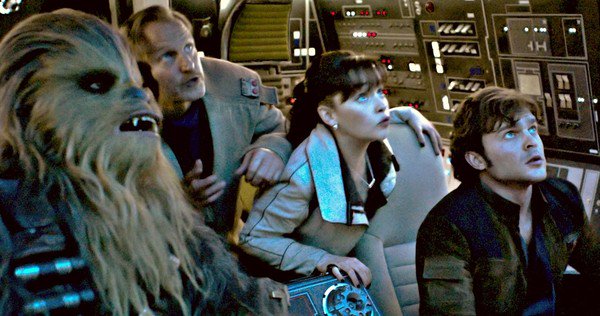 If you’ve ever wondered who Han Solo was and where he came from before joining Luke Skywalker, Princess Leia and the Rebel Alliance on Tatooine, this adventurous prequel supplies the answers. Since Harrison Ford cannot go back to his youth, his sassy, sardonic scoundrel role is played by Alden Ehrenreich (Tetro, Hail, Caesar!), which may or may not have been a mistake. You’ll have to judge. Continue reading…

Han’s story begins on his dismally oppressive home planet, Corellia, from which he and his girlfriend, Qi’ra (Emilia Clarke from Game of Thrones), want to escape. While fleeing, they’re separated.

Along the way, Han befriends the Wookiee Chewbacca (Joonas Suotamo) and wins the Millennium Falcon in Sabacc, a card game with notorious gambler/smuggler Lando Calrissian (Donald Glover, filling in for Billy Dee Williams).

Scripted by the father/son duo of Lawrence and Jonathan Kasdan, it’s helmed by Ron Howard, who took over after the departure of directors Phil Lord & Christopher Miller (“Lego Movie”) due to irreconcilable “creative differences.” Unfortunately, this unevenly paced, hybrid endeavor looks too murky and muddy – both in 2D and 3D.

On the Granger Movie Gauge of 1 to 10, “Solo: A Star Wars Story” is a scruffy, sci-fi 7, filled with hyper-drive action sequences that signify very little.