There’s no question about it — adulting is hard. But sometimes, as the characters in writer/director Theresa Bennett’s debut comedy Social Animals learn, you have to step up and be the grown-up in the room. Especially if that also means you get to be a bit happier and more fulfilled than you were before. Social Animals follows a group of quirky, young, mostly female Austinites as they grapple with careers (or lack thereof), relationships (ditto), and friendship. Continue reading… 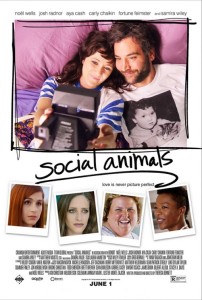 The most prominent character is Zoe (Saturday Night Live alum Noel Wells), a sex-happy, self-employed body waxer who blows through one-night stands as fast as she can take Polaroids of her partners. Her friends include a free-spirited band promoter (Carly Chaikin), a sex-shop owner (Fortune Feimster), and a newlywed/mom-to-be (Samira Wiley). Their circle intersects with that of Paul (Josh Radnor), a laid-back video store owner who’s unhappily married — with three kids — to an uptight lawyer (Aya Cash). Zoe and Paul are immediately drawn to each other, but both have to overcome obstacles to be ready and open for a new, real relationship.

Social Animals isn’t the first indie comedy to explore the restless ennui of late-twentysomething/early-thirtysomething life, and it likely won’t be the last. But it’s always refreshing to get a femme-centric take on the subject, especially one that’s unabashedly frank about sex, relationship needs, and the ups and downs of friendship. No one holds back from speaking their mind, which means we’re spared the too-common trope of artificial misunderstandings getting in the way of characters’ happiness. Here, they have only themselves and their flaws to blame.

Which, in the end, is what makes them relatable — even if you might sometimes find yourself wanting to shake a little sense into them. Adulting is hard, and people make mistakes, sometimes lots of them. But thanks to appealing performances by the leads, a strong supporting cast, and an authentically “keep Austin weird” setting, Social Animals ultimately succeeds — just like its characters. — Betsy Bozdech

Marilyn Ferdinand: Social Animals is rising screenwriter Theresa Bennett debut as a director with a romcom of deceptive depth she wrote herself. There’s nothing groundbreaking about this affectionate look at a small group of 30ish women and men living in Austin, Texas, who are trying to figure out how to make their dysfunctional love lives and careers work. It is really what this marvelous group of actors—led by native Texan Noël Wells as loose living bikini waxer Zoe and Josh Radnor as Paul, an unhappily married bookstore owner—make of Bennett’s clever and knowing script that makes this film such an enjoyable and engrossing experience. You’ll be rooting for everyone, even Paul’s rigid, rejecting wife Jane (Aya Cash), all the way.

Kristen Page Kirby: What Social Animals does best is explore the sexual disconnects that can (and often do) hit women at certain points in their lives. Zoe was happily living a single life, but when she starts to fall for Paul, she starts to change her views on what sex is for and what it means — though without judging her former, more promiscuous self. More refreshing is the sexual relationship (or lack thereof) between Paul and his wife Jane. Plenty of movies have taken on the trope of the shrewish wife who’s no longer interested in sex and the long-suffering husband in bed next to her; here writer-director Theresa Bennett takes a more nuanced, sympathetic view as to why Jane’s libido has waned — at least when it comes to her husband. All in all, Social Animals is an upbeat, engaging look at sex, friendships and the awkwardness of bikini waxing.

Nell Minow: While the story lines sometimes slip into the too-obvious or too-easy, the film has tons of verve and charm and terrific performances from an across-the-board outstanding cast, especially Noel Wells, Carly Chaiken, Fortune Feimster, and Samira Wiley.

Jennifer Merin Social Animals, the first feature from writer/director Theresa Bennett, is a neatly conceived and well-realized femme-centric comedy about a group of 30-something gal pals who are looking, each in her own way, for true love and a lasting, meaningful relationship — one in which they can realize themselves. They talk almost incessantly about sex and very little about anything else. But these gals — as written and performed — are smart, sympathetic, relatable and endearingly quirky. That their dialog, story lines and hormonal attitude towards life don’t come close to passing the Bechtel test may well engender pro and con discussion among feminst critics. As with Heather Graham’s Half Magic, strict stats-trackers may complain that Social Animals‘ female characters measure their success in terms of sex rather than other achievements, but others will see liberation in the film’s female perspective on the all-gender human quest for love and good sex.

Esther Iverem: Social Animals is a fresh take on romance during this late stage of American empire. Writer-director Theresa Bennett creates an Austin, Texas of weird, beautiful and flawed humans struggling with love and economic survival.

Susan Wloszczyna: When it comes to making a comedy, it’s best not to let them see you sweat. But with the in-your-face antics of Social Animals, writer-director Theresa Bennett tries way too hard to pull off a supposedly shocking millennial “womance” (once titled F*cking People) that is marinated in estrogen, immaturity, crude humor and Austin, Texas-style hipster culture. Imagine if someone mixed mumblecore aesthetics and the edgy sensibilities of an uncensored streaming-site sitcom, but forgot to spike the cocktail with relatable characters and situations. The main trio of female 30-something acquaintances – struggling waxing salon owner Zoe (Noel Wells), engaged music manager Claire (Carly Chaikin) and neurotic mom of three Jane (Aya Cash) — are loaded with self-defeating lifestyle choices that quickly wear out their welcome. That they are primarily defined and motivated by their sexual proclivities (or lack thereof) is most disappointing. Making matters worse: The only half-way believable character happens to be a male in the form of How I Met Your Mother’s Josh Radnor as a sad-sack video store owner (yes, Bennett loves her retro references), who is unhappily married to Jane but drawn to Zoe.

Cate Marquis Writer/director Theresa Bennett’s debut feature film Social Animals is a light, quirky comedy about modern romance, Austin, TX style. Social Animals doesn’t offer social commentary, so much as kind of mock social commentary, and is so packed with quirk and ironic Millennial humor about sex, friendship, relationships and just trying to make a living, that it may explode. Read full review.