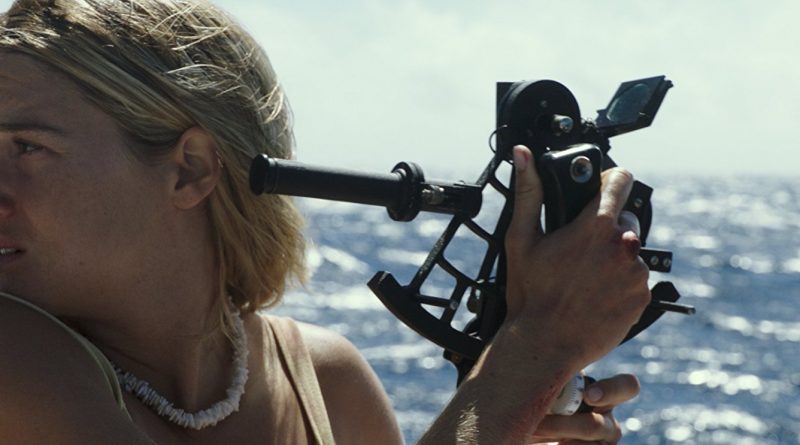 Islandic-born filmmaker Baltasar Kornmakur (Everest) cleverly manipulates chronology to twist and turn this true ‘shipwreck’ story into a tension-filled romantic drama. It begins in 1983 in Tahiti, where a 23-year old, free-spirited Californian, Tami Oldham (Shailene Woodley), meets Richard Sharp (Sam Clafin), a suave, 33 year-old Brit with a sturdy sailboat that he’s made himself. As footloose adventurers, they’re immediately attracted to one another. Continue reading…

When an older couple whom Richard knows ask him to sail their luxurious yacht to San Diego (Tami’s hometown), offering $10,000 and two first-class tickets back to Tahiti, it’s an offer they can’t refuse.

But there’s a 4,000-mile journey across the Pacific Ocean. All’s well until they unexpectedly encounter a horrific hurricane, which badly batters their boat and tosses badly wounded Richard overboard.

Determined to save him, Tami stoically manages to overcome seemingly insurmountable odds: using duct tape to patch a hole in the hull, rigging a makeshift mast, freeing a tangled rudder, and pumping water from the flooded cabin.

Using a sextant, Tami realizes the odds are better if she heads for Hawaii and, despite being a staunch vegetarian, manages to spear a fish, eating it raw.

While there have been other lost-at sea tales – like Robert Redford’s “All Is Lost” and Tom Hanks’ “Castaway,” along with the digitally-enhanced “Life of Pi” – this is the first that’s female-propelled. With “The Fault in Our Stars,” “The Spectacular Now” and “Divergent” behind her, Woodley’s up to the challenge.

FYI: More than 90% of filming was done at sea, beginning at 4 a.m. with a two-hour boat ride from Fiji. Plagued by seasickness, the cast and crew spent up to 12 hours on water with no land in sight.

On the Granger Movie Gauge of 1 to 10, “Adrift” is a suspenseful, even surprising 6, a seafaring saga.